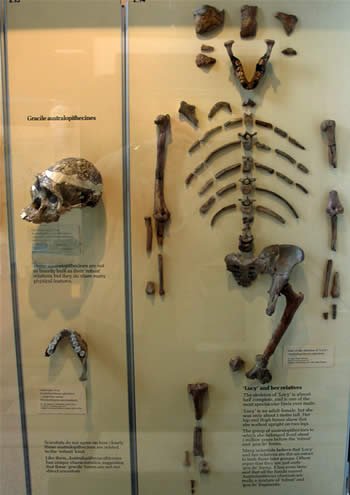 A lot of money will probably exchange hands, as Ethiopia “loans” secular U.S. museums its famous native “daughter”—a supposedly 3.2 million-year-old hominid named Lucy, who is often cited as a transitional form between humans and an ape-like ancestor. The money includes funds for that impoverished African nation, a lot of publicity for tourism, and millions of dollars added to the coffers of the U.S. museums.

But there’s much more to the traveling exhibit than money: this new Lucy show is part of a growing nationwide effort to shore up belief in the “truth” of evolution.

Lucy’s incomplete skeleton will first arrive in Houston and then travel to at least ten other museums over the next seven years. But the AiG Creation Museum, near Cincinnati, will show the fact that Lucy was a knuckle-dragging, ape-like creature that walked upright from time to time (like a modern bonobo chimpanzee). The ape also had curved fingers and toes for climbing trees—no ancestor of ours at all.