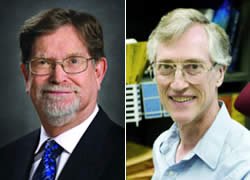 George Smoot (left) and John Mather (right) received the Nobel Prize for their work on the big bang hypothesis, which is contradicted by the Bible and mounting scientific evidence.

Upon receiving the Nobel Prize in physics last fall, scientists George Smoot and John Mather (as summarized by the Associated Press) were acknowledged for “work that helped cement the big-bang theory of the universe and deepen understanding of the origin of galaxies and stars.”

The two claim they were able to “observe” the universe in its early stages—about 380,000 years after the big bang, according to their evolutionary timeline. However, this model—based on circular reasoning that assumes the veracity of numerous unsubstantiated ideas—places the origin of the earth after the sun. Further, the big bang idea still does not answer the basic questions of where original matter came from or what caused the expansion.

The alternative and best explanation of the origin of the universe is found in Genesis 1. God made the sun on Day 4—three days after He made the earth. God’s inspired chronology is irrefutable evidence that the research of these Nobel Prize winners is in error.

Next Article They Love Lucy