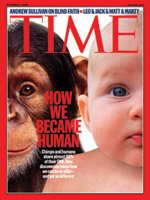 Twice in the past five years, our alleged ancestry with apes has made the cover of Time magazine. All the magazine could offer each time, though, was a lot of speculation. Neither edition “actually explains how we (or apes) became human,” observed creationist biologist Dr. David DeWitt of Liberty University.

Similarities of some physical characteristics do not provide evidence of a common ancestor, as Time claimed; they only provide evidence that the two life forms are similar. While the writers at Time report that humans and chimps have 98–99% identical DNA, this is misleading, for they do not mention that there are many important differences. For example, the percentage obscures the fact there are about 125 million DNA base pairs that are different between the two.

These reports appear to be renewed efforts by evolutionists to refute the biblical teaching that man was created in the image of God.