What comes into your mind when you hear the word “cavemen”? We have been so evolutionised that I suspect the majority of people immediately think of hairy, brutish men usually dressed in animal skins who carry a big club, which they use to attract (well, clobber) a wife.

We also think of them making grunting noises to each other because they have not yet learned to speak properly. And sadly, the terms “cavemen,” “primitive,” and “prehistoric” tend to go together into the same sentence and then into our thought processes. 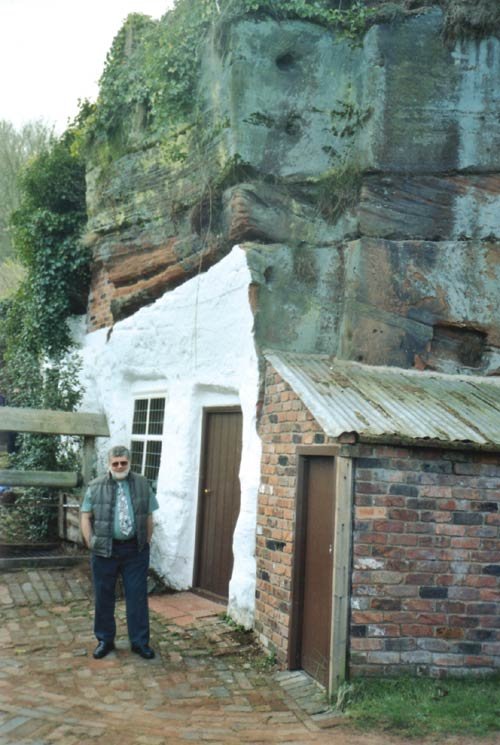 For centuries people had dug into the soft sandstone of Kinver Edge to create the eleven separate cave houses. These dwellings were later vacated due to a legislative order.

The author’s husband, Dr. Monty White, stands beside one of the cave houses at Kinver Edge. 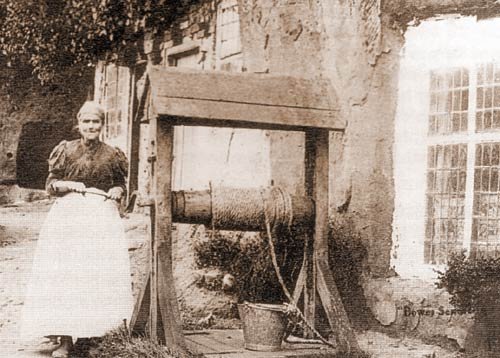 In contrast, when we hear the words “the sixties,” we usually think of the Beatles, the assassination of JFK, and the Apollo moon landings. Would you ever think there could be a connection with these two apparently different worlds?

In a place called Kinver, near Stourbridge in the centre of England, some rock houses, now owned by the National Trust, are a fascinating place to visit. These caves were the basis for eleven separate houses for many years. The last inhabitant was forced to leave in 1967 due to legislation which prohibited dwellings that were devoid of electricity, sanitation, and running water. Reluctantly, these cavemen of the sixties left their caves for normal houses.

These cave-dwellers were far from primitive. The children went to school, the men worked in local industry, and the women took in laundry from the town below. They got water from a well and heated it on a full-sized cooking range, which was built into the rock wall in their living room. The hot water was then taken outside to a “dolly-tub” in a washhouse carved in another rock. These hardships could not have made for an easy life, but it was a life the inhabitants preferred to lead, rather than to rent a more conventional home. They even baked cakes on their range and sold them and other refreshments to curious visitors who would travel to catch sight of these cave-dwellers. Many of them also placed their family Bibles in a prominent place in their homes.

In many parts of the world, people still live in caves; some even have electricity and television. Far from being brutish, cave-dwellers are no different from any of the rest of Adam’s fallen race, for whom the Saviour died. Caves make ideal homes and offer great protection from the elements. It makes sense that people would utilise these provisions and turn them into homes. We need to eradicate primitive thoughts of these people from our minds and rather think of how sensible and enterprising cave-dwellers have been throughout the centuries. 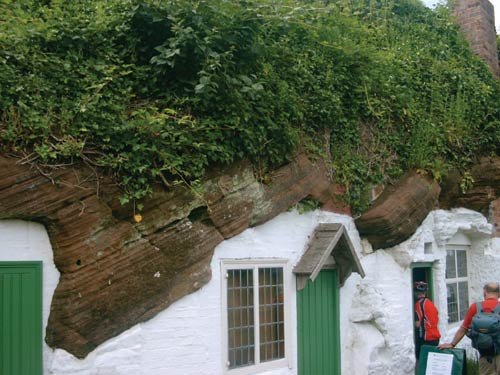 The interpretive display at the Kinver caves introduces evolutionary concepts of millions of years. Such ideas add nothing to our understanding of the dwellings. Signage at the site states:

“Kinver Edge was formed about two hundred and fifty million years ago from wind blown sand, during the desert conditions of the Permian era. This explains the swirling patterns in the sandstone rock that you can see above you. Overlying much of the Edge is a more resilient material known as the ‘Kidderminster Formation’, which was formed by torrential rivers depositing pebbles, silt and sediment.

“This covering is no longer present at Holy Austin Rock, where it is presumed to have eroded away. Without recent restoration work undertaken by the National Trust, the houses would have eventually disappeared entirely.”

Previous Article Culture and Church in Crisis Next Article Purity ... A Priceless Commitment