Who is the latest claimant to the title “oldest known human in the fossil record”? According to some researchers, the crown now passes to a new specimen, Ledi, found in Ethiopia.1

Ledi consists of half a lower jawbone and five teeth (but no cranium to help guess brain size). The jaw was discovered in 2013 about 12 miles (19 km) from the famous supposed ape-woman “Lucy.”

The partial jaw is dated at 2.8 million years (based on uniformitarian assumptions), about halfway in the evolutionary timescale between the apelike Lucy and human fossils like Homo habilis. The discoverers of Ledi claim the jaw is both “primitive” and “advanced.” Some aspects seem closer to a purported apelike ancestor, while others are more similar to the genus Homo.

No ancestral line will ever tie apes with humans.

If you believe humans evolved from apelike ancestors, Ledi seems to be a desired “missing link.” Yet everything found so far—including the supposed “primitive” characteristics—falls within the range of human variation. This specimen does not automatically belong to some pre-human evolutionary line.

More study is needed. No matter what researchers find, however, creationists can be confident that God made apes and every other kind of land animal separately, on the same day of creation, when He made Adam and Eve. No ancestral line will ever tie apes with humans. 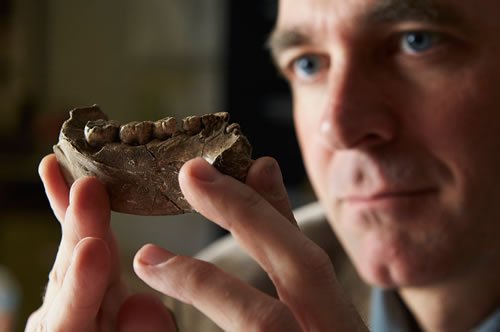