#1 Very Little Sediment on the Seafloor

Every year water and wind erode about 20 billion tons of dirt and rock debris from the continents and deposit them on the seafloor.1 (Figure 1). Most of this material accumulates as loose sediments near the continents. Yet the average thickness of all these sediments globally over the whole seafloor is not even 1,300 feet (400 m).2

Some sediments appear to be removed as tectonic plates slide slowly (an inch or two per year) beneath continents. An estimated 1 billion tons of sediments are removed this way each year.3 The net gain is thus 19 billion tons per year. At this rate, 1,300 feet of sediment would accumulate in less than 12 million years, not billions of years.

This evidence makes sense within the context of the Genesis Flood cataclysm, not the idea of slow and gradual geologic evolution. In the latter stages of the year-long global Flood, water swiftly drained off the emerging land, dumping its sediment-chocked loads offshore. Thus most seafloor sediments accumulated rapidly about 4,300 years ago.4

Where Is All the Sediment? 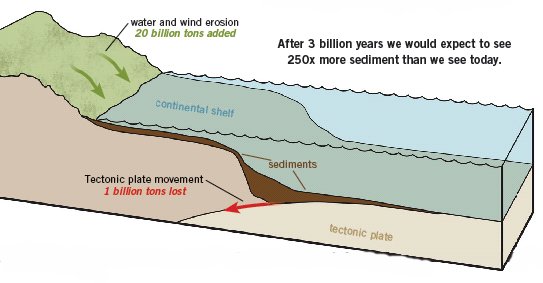 Figure 1: Every year, 20 billion tons of dirt and rock debris wash into the ocean and accumulate on the seafloor. Only 1 billion tons (5%) are removed by tectonic plates. At this rate, the current thickness of seafloor sediment would accumulate in less than 12 million years. Such sediments are easily explained by water draining off the continents towards the end of the Flood.

Those who advocate an old earth insist that the seafloor sediments must have accumulated at a much slower rate in the past. But this rescuing device doesn’t “stack up”! Like the sediment layers on the continents, the sediments on the continental shelves and margins (the majority of the seafloor sediments) have features that unequivocally indicate they were deposited much faster than today’s rates. For example, the layering and patterns of various grain sizes in these sediments are the same as those produced by undersea landslides, when dense debris-laden currents (called turbidity currents) flow rapidly across the continental shelves and the sediments then settle in thick layers over vast areas. An additional problem for the old-earth view is that no evidence exists of much sediment being subducted and mixed into the mantle.

Dr. Andrew Snelling holds a PhD in geology from the University of Sydney and has worked as a consultant research geologist in both Australia and America. Author of numerous scientific articles, Dr. Snelling is now director of research at Answers in Genesis.
Previous Article The 10 Best Evidences from Science That Confirm a Young Earth Next Article #2 Bent Rock Layers