The visitor overlooks at Bryce Canyon, Utah, provide a breathtaking spectacle of row upon row of towering columns painted pink, red, white, and orange. Together, these columns were formed in a series of horseshoe-shaped amphitheaters, cut into the surrounding cliffs. The largest and most spectacular is Bryce Amphitheater, about 12 miles (19 km) wide and 800 feet (245 m) deep, sporting thousands of columns. 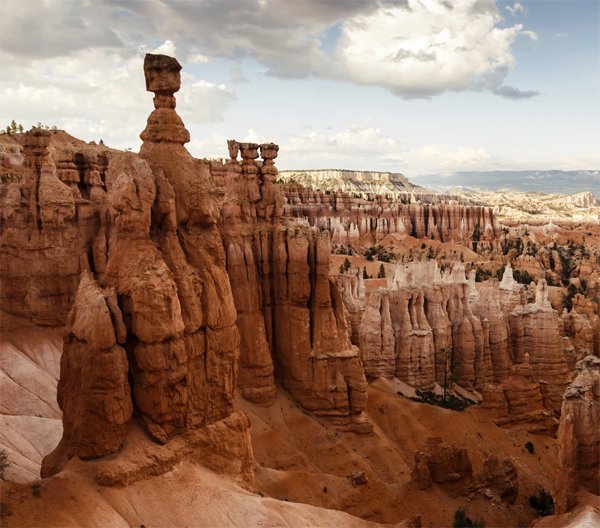 Standing guard along the rim of a natural amphitheater is an army of tall columns, called hoodoos. Conditions were just right after the flood to form them rapidly.

It is hard to capture in photographs the exquisite beauty of such a vast and devastated landscape. Particularly stunning are the delicate hoodoos, slender columns with balancing “hats” on them that look ready to fall, and sometimes do!

Native American legends say these statues were the Legend People—animals that took on human form but committed a wicked deed and were turned into stone. Some were standing in rows, some sitting, and some clutching each other. You can still see the red paint on their faces.

Evolutionists and Flood geologists both say these colorful layers formed at the bottom of a lake and that tectonic forces later pushed up the layers, exposing them to erosion. Evolutionists say this erosion occurred over millions of years.

Yes, these layers were deposited by water, and catastrophic earth movements exposed them to rapid erosion. But God’s Word gives us other clues necessary to understand the whole story.

Before looking at the details, it is important to understand that Bryce is not, strictly speaking, a canyon! It’s actually the edge of a high plateau (Paunsaugunt Plateau, an arm of the even greater Colorado Plateau). This plateau rose up at the end of the Flood as the last waters receded, and Bryce was eroded into its side.

Hoodoos are common in the Colorado Plateau and in the Badlands of the USA. Other spectacular examples are in Cappadocia (Turkey), the Alpes-de-Haute-Provence (France), Serbia, Taiwan, and Drumheller (Alberta, Canada).

The top of this plateau consists of the pink and white layers of the Claron Formation. The pink is due to the iron and manganese in the sediments, which reacted with oxygen. The hoodoos were carved out of these layers.

The Claron Formation was likely among the first sediment layers deposited in the very early post-Flood period immediately after the last Flood waters receded. This plateau region was rising up around the same time, creating natural dams that produced massive lakes in the continent’s interior (including the Green River lakes of Utah, Wyoming, and Colorado). The waters eventually broke through the dams, surging away from the edges of the Paunsaugunt Plateau (see figure).1 Subsequently the water draining out of the bases of the plateau would have completed the carving of the cliffs and amphitheaters at Bryce (a process of headward erosion technically known as sapping).2

Conditions at the edges of these cliffs are optimal for erosion. The layers of the Claron Formation vary in hardness, with softer mudstones alternating with harder sandstones or limestones. When the mudstones wash away, other rocks collapse more readily and wash away, too. The steep slopes increase the speed and energy of the rainwater running off the top. In the early years after the Flood, superstorms ravaged the earth and eroded it much faster than we see today.

As the rain passes through the atmosphere, it becomes weakly acidic. That acid eats away at the sediments, especially the limy layers. Furthermore, the sedimentary layers at Bryce contain several sets of parallel cracks called joints. Water enters these cracks, where it freezes at night and thaws during the day—today the region experiences 200 freeze-thaw cycles per year—further weakening the rock layers.

As the water flows downward, it picks up debris and scours any softer rocks it encounters, creating gullies. The gullies widen into canyons, exposing more surfaces to erosion along their vertical cracks. Further freeze-thaw cycles expand the cracks and peel off side layers, especially of the softer rocks.

Normally we would expect weathered rocks to collapse into piles, rather than leaving behind tall, slender columns. The key to producing these marvels is putting a harder rock layer (a “cap”) on top of the soft layers. This prevents the soft rocks from wearing away so quickly. The “caps” on Thor’s Hammer and The Hunter, for example, are made of harder rock.

How Were Hoodoos Formed?

The Flood left behind massive lakes in the continent’s interior, where thick deposits settled at the bottom. Later, these lakes broke free, catastrophically draining away the edges of the lakes.

Water continued to seep out of the lower rocks at the edge of the plateau, taking more rock material with them (a process called sapping). The steep walls eroded quickly, without losing their shape.

The steep slopes increased the speed of rainwater, which fell in heavy downpours after the Flood. The acidic water entered cracks and ate away the soft layers. Freeze-thaw cycles expanded the cracks and peeled off the sides.

Normally weathered rocks would collapse into piles. But a harder top layer (“cap”) kept the softer layers from wearing away so quickly, leaving behind slender hoodoos.

Dr. Andrew Snelling holds a PhD in geology from the University of Sydney and has worked as a consultant research geologist in both Australia and America. Author of numerous scientific articles, Dr. Snelling is now director of research at Answers in Genesis–USA.
Previous Article Giant’s Causeway Next Article Cotton Castle