The Giant’s Causeway, Northern Ireland’s most iconic landmark, has attracted millions of curious travelers over the centuries. Some 40,000 strange, interlocking columns form a “road” of stepping stones that lead from the coastal cliffs down into the sea. The edges of each column line up so perfectly they look like the work of a skilled Inca mason. 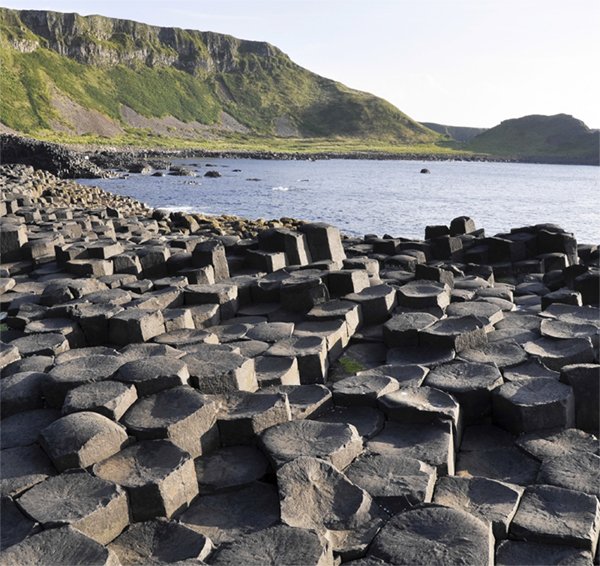 Rising up along northern Ireland’s coast are a series of tall, geometric stepping stones. These basalt columns formed during the Flood, as lava oozed over the region, cracking into regular patterns as it cooled.

Legend has it that Irish giant Finn MacCool built the causeway so he could travel across the sea to fight a challenger in Scotland without getting his feet wet. (Similar columns rise from the sea in the Scottish Isles.) Evolutionary geologists say the causeway was formed by massive volcanic eruptions 50–60 million years ago.

The first clue is that these columns are made out of basalt, a rock formed from cooling lava. When we observe lava cooling today, it shrinks and cracks. Under the right conditions—uniform mineral content and slowly falling temperatures—the cracks follow geometric patterns.

As the lava contracts, fractures first appear on the surface. Then the cracks extend deeper into the mass as it cools, forming the pillar-like columns.

The columns contracted at the bottom and top simultaneously. This would mean that the bottom shrank upward, while the top shrank downward. In many cases the bottom is convex, as expected, while the upper segment is concave, producing what are called “ball-and-socket” joints.

In theory, based on how cooling lavas should behave, the basalt columns should all be six-sided (hexagonal). However, nearly one-third are five-sided (pentagonal), and a few others are four-, seven-, and eight-sided. This goes to show that real-world geology doesn’t always follow our initial, simple theories.

Most columns are about 15 to 20 inches (38–51 cm) in diameter, around the size of a common patio stone. The size of the columns was primarily determined by the speed at which the lavas cooled. And not all the columns are vertical. Some are tilted where the cooling surface was sloped.

Several lines of evidence indicate that Giant’s Causeway formed during several volcanic eruptions that occurred in rapid succession. After each eruption, the thick basalt started to congeal, cool, and harden, aided by being briefly covered with water, before the next lava flow covered it. The middle flows in the sequence are slightly different in content than the others, and these are the ones that consist of regular, well-developed columns, particularly in their lower parts.

The “causeway” is part of a massive basalt deposit, known as the Thulean Plateau, estimated to cover 700,000 square miles (1,800,000 km2) and be nearly half a mile thick. Where did all this material come from? We simply don’t see anything on that scale today.

The Flood of Noah’s day produced just the right conditions. As the earth’s plates moved rapidly apart (opening up the Atlantic Ocean), huge fissures opened in the crust. Massive amounts of thick lava flowed through these openings into the North Atlantic, covering Greenland, Iceland, western Scotland, and northeast Ireland. These land areas were closer together then but shifted apart as the plates continued to move at the Flood’s end and rapidly decelerated in the early post-Flood era.

The basalt lavas here did not erupt violently, but instead poured out of the ground like a thin oil (similar to the volcanoes in Hawaii today, but on a much larger scale). Eruptions were intermittent in pulses, as seven successive flows, most of them measuring nearly 100 feet (30 m) thick, stacked on top of one another. Later erosion exposed some of the columns that formed within these layers.

Dr. Andrew Snelling holds a PhD in geology from the University of Sydney and has worked as a consultant research geologist in both Australia and America. Author of numerous scientific articles, Dr. Snelling is now director of research at Answers in Genesis–USA.
Previous Article The Devils Marbles Next Article Hoodoos of Bryce Canyon