An early Australian explorer trekking into central Australia found large, round boulders scattered across the surface, sometimes in huge stacks, and sometimes precariously balanced on a tiny base. He reported in amazement, “This is the Devil’s country; he’s even emptied his bag of marbles around the place!” And the name stuck. 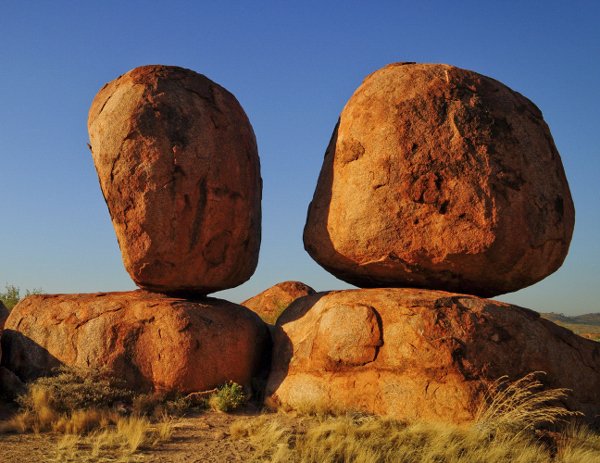 Strewn around the ground in Australia’s interior are rounded, free-standing boulders. The original granite blocks were formed during Creation and later sculpted in the harsh environmental conditions after the Flood.

The Devils Marbles are an iconic landmark in Australia’s Outback. The local indigenous Australians call the region Karlu Karlu (“round boulders”) and consider it a sacred site. A dreaming story says the Devil Man created these features when he left twirled clusters of hair on the ground that became round boulders. Evolutionary geologists say the rocks formed deep in the earth 1.7 billion years ago, and then erosion over long ages produced these features at the surface.

The erosion of the granite in the conventional geologic story does explain the boulders but not the timing of their formation. Because it leaves out God’s record about His catastrophic interventions in the past, it fails to recognize how quickly these things occurred.

Two catastrophic episodes in earth history could explain when granite formed rapidly—when God formed dry land on Day Three of Creation Week, and during the global watery cataclysm of Noah’s day. This granite mass likely formed during the Creation Week.

The actual science behind these boulders is pretty straightforward. Deep in the earth’s crust (its thin outer skin) the temperatures and pressures were so high that the rocks sometimes melted to form granite magma (molten rock). This magma then squeezed upwards along fractures and collected wherever spaces were forced to open up close to the earth’s surface. There the granite magma cooled and crystallized to form the rock called granite.

Because of the regular pattern of mineral crystals in granite, the cracks followed an even and geometric pattern (see figure). The granite mass broke up into many large blocks, roughly cubic in shape.

Many of these blocks wore away quickly under the heavy rains and harsh conditions that immediately followed the Flood. Water carried chemicals down into the cracks, causing the granite to weather and decay rapidly.

Two processes sped up the breakdown. The surfaces constantly expanded and contracted as a result of chemical weathering and daily temperature fluctuations. In today’s desert environment, the heat of the sun causes the thin outer “skins” of the blocks, along with the minerals in them, to expand slightly; after nightfall they contract slightly. The outer skins eventually cracked and fell off, rounding the boulders so they look like peeling onions. These processes together are thus called spheroidal or “onionskin” weathering. The net result is the piles of perched and rounded granite boulders, or tors.

How Were Devils Marbles Formed?

The boulders are remnants of a granite mass that formed deep in the earth during Creation. As the magma cooled, it shrank and cracked. But the weight of the overlying rock layers kept the cracks from appearing.

When the Flood washed away the overlying rock layers, it released the weight on the granite, and cracks opened up. The receding floodwaters scraped the continent down to the bedrock, exposing the granite.

The breakdown was accelerated by daily temperature fluctuations that caused the thin outer “skins” to expand and contract. Eventually the skins fell off, rounding the boulders like peeling onions.

Dr. Andrew Snelling holds a PhD in geology from the University of Sydney and has worked as a consultant research geologist in both Australia and America. Author of numerous scientific articles, Dr. Snelling is now director of research at Answers in Genesis–USA.
Previous Article Arches of Utah Next Article Giant’s Causeway