Located just outside Moab, Utah, is a wonderland of more than 2,000 natural arches. Towering 85 feet (26 m) overhead and spanning 65 feet (20 m) is the best-known rock arch in the world, Delicate Arch. Nearby is one of the world’s longest natural arches, Landscape Arch (a whopping 291 feet, or 89 m, long). Everywhere you turn are spectacular arches of various shapes and sizes, such as Double Arch, Skyline Arch, and Tower Arch. Why are there so many natural arches in this one area? 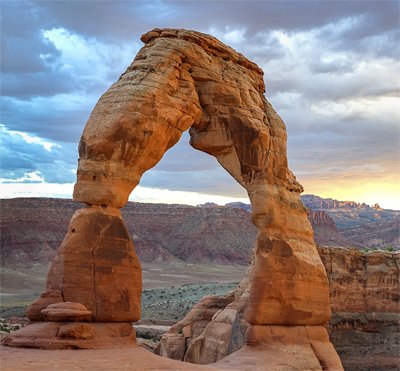 Standing alone on a hillside is the world’s best-known arch, Delicate Arch, towering 85 feet (26 m) overhead. The flood set in motion a sequence of events that produced such wonders very rapidly.

Evolutionary geologists recognize that massive earth movements were required, but they mistakenly assume long spans of time. The problem is that they have chosen to ignore the unique impact Noah’s Flood had upon the earth’s surface.

Creating such delicate features requires more than gouging big holes into sandstone. A long series of events had to happen beforehand. First, some process had to create tall, thin rock walls, out of which the arches were carved. These rock walls are called fins (see figure). They appear in parallel rows, like the furrows of a plowed field, and we can still see some today.

Only later did water, chemicals, and—to a lesser extent—wind eat away at these walls. In most cases the whole wall would crumble, but in some cases only the lower portions collapsed. Today we’re looking at the remains of these rows of walls (fins).

Creating rows of rock walls requires special conditions. Sandstone must be deposited on top of less stable material, which then shifts upward and causes the sandstone to break up into parallel strips. Arches National Park sits atop thick underground salt beds, which are very unstable. During the Flood, hot salty waters deposited these beds in a wide basin in this area, now part of the Colorado Plateau region.

After the Flood deposited the salt beds, the waters tore debris from the nearby Uncompahgre Plateau (an Indian word meaning “dirty water” or “rocks that make water red”) and deposited the sands on top of the salt beds. These sediment layers included the Navajo Sandstone and the Entrada Sandstone. The weight of these accumulating rock layers caused the salt beds to liquefy and push up into salt domes. The arching and bending of the sand layers over the salt domes produced parallel fractures in the sandstone. Later the Flood deposited another mile of younger sediments (about 5,000 feet, 1,524 m) on top of the Entrada Sandstone.

Other famous arches and bridges include Rainbow Bridge near Page, Arizona; Shipton’s Arch in China (the tallest, at 1,200 feet); and Aloba Arch in Chad (the second tallest arch, at 394 feet).

Next this whole region was uplifted at the end of the Flood, and the waters that rushed violently off the continent washed away most of the layers above the sandstone. The uplift further released pressure on the sandstone and caused gentle warping in the Entrada Sandstone, opening up additional closely spaced, parallel joints, 10–20 feet (3–6 m) apart.

Most arches are carved out of the Entrada Sandstone, especially at the edges of the gentle hills that rose above the valleys. Slightly acidic rainwater slowly broke down the sandstone’s cement (made of lime), progressively releasing the sand grains. Such weathering and erosion by water and wind enlarged the fractures to produce narrow parallel sandstone walls or fins. Frost and cycles of freezing and thawing caused expansion and contraction of the rock surfaces, which progressively peeled off (exfoliated).

Eventually holes appeared along the fractures that ran up and down the walls. The seeping water collected at the bases of the walls and evaporated slowly. All this extra water caused the bases to weather more rapidly than the tops. Fragments began to loosen and fall, enlarging the openings into holes and then arches.

Eventually arches will wear through and collapse. Forty-three arches have collapsed due to erosion since 1970. Their loss is a sober reminder of how delicate—and recent—these formations are. Rapid processes created them and are now destroying them.

How Were Arches Formed?

Rainwater broke down the sandstone and enlarged the fractures, producing tall, thin walls known as fins. The arches were carved out of these fins (left).

Water, chemicals, and—to a lesser extent—wind ate away at these walls. In most cases the whole wall crumbled, but in some cases only the lower portions fell (center).

The seeping water collected at the bases of the walls. This caused the bases to weather more rapidly than the top. Openings were enlarged into holes and then arches (right).

Dr. Andrew Snelling holds a PhD in geology from the University of Sydney and has worked as a consultant research geologist in both Australia and America. Author of numerous scientific articles, Dr. Snelling is now director of research at Answers in Genesis–USA.
Previous Article Mysterious Natural Wonders Next Article The Devils Marbles