Most geologists believe the process of coal formation was slow and gradual, but this is denied by the field evidence.

Pictured are some thin coal seams or layers near Chignecto Bay (otherwise known as the Bay of Fundy), Nova Scotia, Canada. The geological hammer gives an indication of the scale. The coal seam it is resting against is about 10 centimetres (4 inches) thick, while along the top of the photograph can be seen another coal seam which is about 15cm (6 inches) thick and roughly parallel to the bottom coal seam. Be­tween these two can be seen two thin­ner coal seams. What is critically sig­nificant is that the uppermost of these two thinner coal seams actually forks or branches, one fork angling acutely upwards through the intervening stra­tum to merge with the coal seam above. How could this coal have formed? 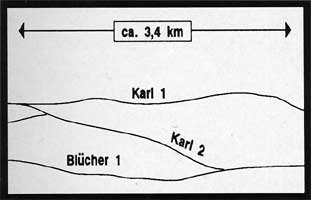 According to the standard theory, remains of plant debris accumulate as a rotting mass called peat in swamps and marshes. Today we know of a number of swamps where peat appears to be accumulating. This peat accumu­lates slowly and gradually today (esti­mated at between 1 and 4 millimetres per year), so geologists who believe that ‘the present is the key to the past’ con­clude that the plant debris found in coal seams must have formed slowly and gradually from plant debris accumulat­ing as peat in the bottom of swamps.

Once the peat is buried under sub­sequently deposited layers of sand and mud, in the process of coal formation it is compressed down to about a tenth of its original thickness. This means that for a 15 centimetre (6 inch) thick coal seam there could have originally been up to 1.5 metres (5 feet) of peat to be compressed. Accumulating at 1-4mm per year, just this one layer would have supposedly taken up to 1,500 years to accumulate.

However, most of these geologists are realistic enough to accept that just as flooding can occur locally today, then local flood events in the past would have deposited layers of sediment in swamps burying the peats. Subsequent regen­eration of plant growth would result in more peat then accumulating on that sediment layer, so forming a sequence of successive peat and sediment accu­mulations within the swamp. Many geologists believe this is the process which produced the layering often ob­served within individual coal seams. To produce the thicker layers of sediment between coal seams (as seen in the pic­ture here) would have taken much longer and more widespread periods of flooding, which would effectively de­stroy the swamps for protracted peri­ods of time.

Now can this slow and gradual theory explain the situation shown in this photograph of a field exposure? Definitely not! Nowhere do we observe peat forking like this in swamps today. If the intervening sediment layer through which the coal seam forks rep­resents a protracted period of flooding and destruction of the original peat-ac­cumulating swamp, then how could this swamp have continued in this localized area, and on a sloping surface, while at the same time flooding was deposit­ing sediments horizontally to bury the swamp? Clearly, so-called z-junctions like this one are totally inexplicable in terms of the ‘slow and gradual accumulation in a swamp’ theory for coal formation. Furthermore, such z-junctions are found in many coalfields around the world, the forks often passing through many feet or metres of intervening strata over distances of several miles or kilometres. This only compounds the impossibility of the swamp theory explanation.

On the other hand, the catastrophic flooding model can explain these occurrences with ease. Vegetation ripped up by flood waters and accumulated as floating mats of debris on the water’s surface progressively became waterlogged and sank to accumulate as a layer below (as in Spirit Lake at Mount St Helens1). That then became buried by other sediments, or was caught up and buried within accumulating sediments. As more debris became waterlogged and sank, further layers of debris would accumulate in a progressive alternating sequence of sediments and vegetation debris layers, that were subsequently altered to the coal. In this model the vegetative debris can accumulate and be buried at any angle or relationship to the enclosing sediments. Hence the z-junction seen in the photograph.

Thus the field evidence is consistent with catastrophic destruction and burial of vegetation during Noah’s Flood, and totally inconsistent with the slow and gradual swamp theory which prevails among geologists committed to the idea that ‘the present is the key to the past’, or geological evolution. 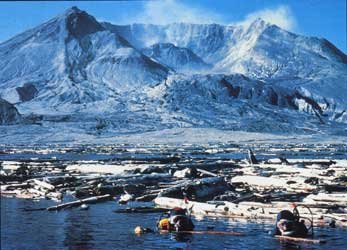 Drained swamp deposit along the coast of Nova Scotia. 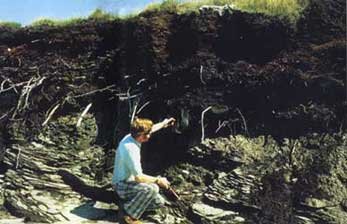