Give Now
Wonders of Geology

Mammoth Caves in Kentucky and Carlsbad Caverns in New Mexico

Two of the world’s most spectacular caves are Mammoth Caves in central Kentucky and Carlsbad Caverns in southeastern New Mexico. Find out how they formed.

Underground worlds of mystery and grandeur, caves are labyrinths of passageways and streams, homes to unusual creatures and stunning formations. Two of the world’s most spectacular caves are Mammoth Caves in central Kentucky and Carlsbad Caverns in southeastern New Mexico. Mammoth is known for its long passages while Carlsbad is known for its large rooms and bat colonies. These two caves provide good examples of most of the caves found around the world—limestone caves. 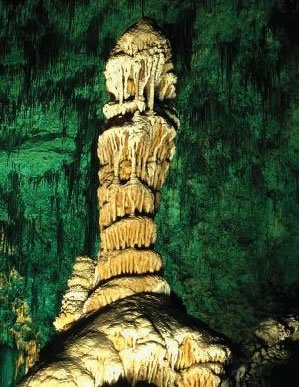 In its pure state, water is acid-free. However, as rainwater falls through the atmosphere and as it passes through decaying organic matter in the soil, it picks up carbon dioxide (CO2), making the water acidic. As this water with carbonic acid makes its way underground through cracks and fractures in the earth’s surface, it reacts with the calcite that makes up most of the limestone, putting it into solution. It is then removed with the help of underground streams. As these areas of limestone are dissolved and removed, large openings under the earth’s surface are left, thus creating caves. In addition to carbonic acid, evidence shows that hydrogen sulfide from oil and gas deposits, and a whole range of microbes, combines with oxygen in the underground water table, producing sulfuric acid. This strong acid causes very aggressive dissolution of passageways at the level of the water table along cracks, fractures, and faults in the limestone.

Caves vary in size, shape and content; but they all include spectacular formations. The two most well-known speleothems are stalactites and stalagmites, but many confuse the two. One way to remember the one on the cave’s ceiling is that they hang “tite” to the ceiling—stalactites. Stalagmites, on the other hand, “mite” rise from the floor of these underground worlds. These formations result when this mixture of water and calcite enters a cave. The solution goes through a reaction where CO2 bubbles away, and the calcite is deposited in formations called speleothems. Stalagmites result from the calcite collecting on the floor directly below a stalactite, which forms by calcite collecting on the ceiling. If the two join together, they become known as a column. Other speleothems include flowstones, draperies, soda straws, and helectites.

According to evolutionary geologists, beginning about 300 millions years ago, marine animals living in shallow salt seas died and sank to the sea floor. Over tens of millions of years, their hard-shelled bodies built up hundreds of feet of limestone. After millions of years of burial under sediment, uplift, and erosion, both the Carlsbad Caverns and Mammoth Caves began to form, taking many millions of years for water to erode in the limestone. Secular geologists have obtained these ancient dates from radiometric dating techniques, though the range of calculated dates actually varies quite widely. These geologists also assume that the rate of cave formation observed today is the same as it was when these caves originally formed. And since the effect of acidic water on limestone has been observed to be a slow process, geologists reason that large caves and caverns required millions of years to form.

Most of the major limestone layers show evidence that they were laid down by large amounts of water. They contain large numbers of catastrophically buried fossils. It is probable that they formed during the global Flood of Noah’s day (Genesis 6–9), when lime-rich volcanic waters gushed from springs on the ocean floors. These limestone layers were then buried rapidly by other layers of sediment, trapping considerable amounts of water within each limestone layer. Naturally, these layers began to harden over time; however, the water within each layer retarded this process and kept the limestone pliable. In the after-effects of the Flood, great tectonic activity would have uplifted the limestone layers, bringing them closer to the surface. Bent and twisted layers of rock are seen today, testifying of these movements. These movements not only created fractures in the partially hardened layers of limestone, but the extreme pressure also forced out much of the trapped water within these layers. The water then began to flow along the horizontal and vertical channels, which had also been produced by the earth’s tectonic activity.

It is likely that the tectonic activity of the earth also released hydrogen sulfide, combining with ground water to create sulfuric acid that could have swiftly eaten away tremendous amounts of limestone. In addition, as the floodwaters receded completely from the earth’s surface, the groundwater would have taken some time to reach a balanced level. The water flowing beneath the earth’s surface would have been tainted with acid from the great amounts of decaying organic matter above after it seeped through the first few layers of soil. With such extreme amounts of acidic water, the caves would have been carved out in a short time.

Speleothems such as stalagmites and stalactites have also been found to form rapidly under the right conditions. It is observed that the caves and their formations found in tropical rain forests form much more rapidly due to the increased rainfall.

Caves and their formations did not need many millions of years to form, they could have formed rapidly during the closing stages of, and after, the worldwide Flood of Noah’s day. With the incredible amounts of water from the Flood, the increased carbon levels from all the decaying matter and the related tectonic activity, the global Flood described in Genesis 7–8 produced the right conditions for caves to form very quickly.