Devils Tower, an impressive formation amid a relatively flat region, raises natural questions among many viewers as to how it formed.

Towering above the flat landscape of Wyoming is one of the natural wonders of the world. Standing almost 1,300 feet (395 m) above the Belle Fourche River, Devils Tower is enjoyed by thousands of visitors each year and provides a challenge for any adventurous rock-climber. Devils Tower, an impressive formation amid a relatively flat region, raises natural questions among many viewers as to how it formed. Careful interpretation of the evidence in and around Devils Tower tells us the history. 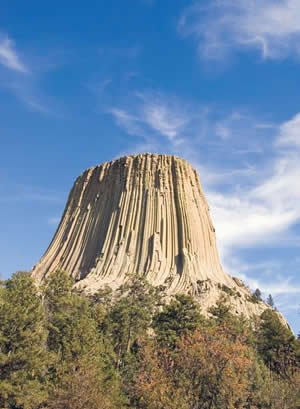 This formation was created when magma (molten volcanic rock inside the earth) was pushed into place underground. At the time Devils Tower formed, the surface of the surrounding land was nearly 3,000 feet (915 m) higher than it is today. After the magma hardened and cooled, the area was then eroded away. There are two theories about how Devils Tower formed. One theory holds that Devils Tower is a laccolith. A laccolith is a large mass of igneous (volcanic) rock which intruded through sedimentary rock beds but did not actually reach the surface, producing a rounded bulge in the sedimentary layers above. The other theory is that Devils Tower is a volcanic plug, or the neck of an extinct volcano. The composition of the volcanic material that makes up Devils Tower suggests that the magma body was fairly thick when it formed, thus enabling it to maintain the shape it presently has. A thinner magma body would form a hard layer over a wider area that resists erosion and remains a flat plateau. But, since it was relatively thick, the magma pushed into a massive lump, forming its visible shape. The magma then solidified, preserving Devils Tower.

Devils Tower is made up of spectacular vertical columns of igneous rock with five or six sides each. At the base, these columns are about 7 feet (2 m) wide, and they decrease in size to around 4 feet (1.2 m) at their peak. The columns are composed of rock containing fine-grained minerals that suggest they formed quickly and solidified at a shallow level. The columns of Devils Tower are nearly the same height, which suggests that the whole had once been a single magma pool but had fractured into separate columns as it cooled.

Erosion of the surrounding rock layers played a key role in exposing the solidified magma. Two separate stages of erosion are suggested to have taken place to expose what is seen today. The first erosional event leveled the area to slightly above the height of the tower. The second stage eroded the remaining area into a wide valley, through which the Belle Fourche River runs today.

The evidence of the tower’s composition, its columns and its erosion can be studied by anyone. What needs to be remembered, however, is that each observer approaches the evidence with certain beliefs that determine how they interpret that evidence.

Evolutionary geologists interpret the evidence surrounding Devils Tower as proof of millions of years of slow erosion. On an evolutionary timescale, the rock that makes up Devils Tower is a relatively young 40 million years old. Before that time, deep sedimentary layers were formed by advancing and retreating seas over a period of more than 150 million years. About 65 million years ago, pressures within the earth uplifted the Rocky Mountains and the Black Hills. Devils Tower was formed underground about 20 million years later. The land was slowly eroded away by the retreating and returning of seas, which took place over these vast ages.

Since creation took place around 6,000 years ago, according to the Bible, Devils Tower could not have formed millions of years in the past. One catastrophic event could be responsible for the formation of this natural wonder. This event was the Genesis Flood about 4,500 years ago, as recorded in Genesis 6–9. There is evidence that dramatic volcanic activity accompanied the Flood, which would explain the intrusion of magma that initially formed Devils Tower underground. It is also likely that the earth’s surface was dramatically changed as the crust of the earth shifted. This shift, causing new ocean basins to sink and continents to rise, would have created the mountains and valleys of the world. After the ocean basins began sinking, the Flood waters began to drain from the land surface. Initially, rapid erosion of sediments would have occurred in wide spans, cutting wide, flat surfaces across the landscapes. Eventually, the receding waters split into large channels which cut deep valleys and, in this instance, formed the valley of the Belle Fourche River and exposed Devils Tower.

If we approach the evidence with the idea that the earth is millions of years of old, we are left with inconsistencies. If Devils Tower had been exposed through slow erosion of the land, numerous things about the tower would be different. First, the formation would have most likely eroded completely away since we can observe it eroding even today. Secondly, the formation would have cracked and broken apart due to the constant freezing and thawing occurring each year over millions of years. Lastly, the top of Devils Tower would be drastically smaller than its base, as erosion slowly exposed more and more of the tower. These visible contradictions speak against the evolutionary interpretation of the evidence and confirm the biblical age of just a few thousand years.