These towering escarpments, stretching 10 miles (16 km) along the coast, not only guard England from its enemies but, more importantly, give tribute to the global Flood.

Impressive and dramatic, the White Cliffs of Dover keep watch as a citadel over the southern entrance into the Strait of Dover, which separates England from France. These towering escarpments, stretching 10 miles (16 km) along the coast, not only guard England from its enemies but, more importantly, give tribute to the global Flood as described in Genesis 6–9. 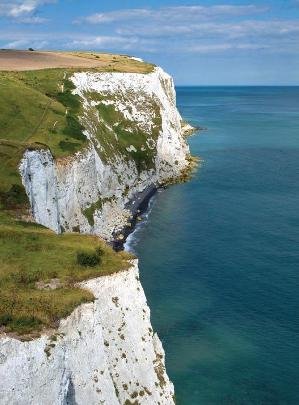 Chalk formations are found in many places in Europe, including England, France and Northern Ireland, and even extend into the Middle East as far as Kazakhstan. Extensive chalk beds are also found throughout North America, including the states of Tennessee, Nebraska, Mississippi, and Kansas.

Many secular geologists claim that these chalk beds speak of an old earth since they believe chalk formed slowly and progressively over millions of years. However, when we interpret the evidence from a biblical perspective, we see that there is an explanation for the formation of these chalk beds that aligns with the biblical timescale of thousands of years. The main cause of these beds is the catastrophic, worldwide Flood.

White chalk is composed almost entirely of calcium carbonate. This calcium carbonate, a very pure type of limestone, consists of billions of microorganisms including foraminifera and calcareous algae, coccoliths and rhabdoliths. Today, these microorganisms live in the upper 300–600 feet (91–183 m) of the open seas. When these microorganisms die, their calcium-rich shells accumulate on the bottom of the ocean floor, often almost 15,000–16,000 feet (4.6–4.9 km) below the surface. These shells cover about one-quarter of the surface of the earth today. It is estimated that these remains take up to 10 days or longer to reach the ocean floor and reportedly accumulate at a rate of .5–3 inches (1.25–7.5 cm) per thousand years.

The measured rate of chalk accumulation seems to demonstrate that these chalk beds could not have formed quickly. Evolutionists claim that these chalk beds were formed around 70 to 100 million years ago, during the “Cretaceous period,” when the southern portion of England was submerged by a shallow tropical sea. Chalk slowly accumulated and the land was eventually uplifted by movements of the earth’s crust to where the cliffs tower over the Strait of Dover up to 350 feet (105 m) high.

With such a slow rate of accumulation, how did such monumental chalk beds form on an earth, which is, according to the Bible, a little over 6000 years old? For the chalk formations to have reached the thickness they are today in a few thousand years, the production of microorganisms would have had to greatly increase sometime in the past. In fact, under the right conditions, rapid production and accumulation of these microorganisms on the ocean floor is possible. These conditions include turbulent waters, high winds, decaying fish, and increased temperature and nutrients from volcanic waters and other sources.

With catastrophic volcanic activity warming the oceans and releasing large amounts of CO2, and with the torrential rains and the churning and mixing of fresh and salt waters, the Flood of Noah’s day produced the right conditions for a “blooming” production of microorganisms and the chalk’s rapid accumulation. The three major sections of the White Cliffs of Dover give evidence of three major “blooms” in chalk formation, which would have taken place during the year-long Flood.

The purity of the chalk itself also points to rapid accumulation. One cannot imagine a scenario where deposits over millions of years could maintain such purity without accumulating some contaminating sediments from other events.

Additional evidence for a global Flood in the White Cliffs of Dover includes the layering of the chalk in alternating thin, hard layers and thick, soft layers. In these hard layers, called hardgrounds, we find fossils of mollusk shells and other sea creatures, some as large as 3 feet (1 m) across (ammonites), which could not have been buried alive slowly! The same chalk formation in the Netherlands has yielded a very large Mosasaurus skull. Since sea life was not part of Noah’s cargo on the Ark, they had to endure the ravages of the Flood. Marine life would have been swept into the rapidly forming chalk and other sedimentary layers and quickly buried by successive deposits. That is why we find fossils of sea creatures in even the highest chalk layers, now far above the ocean.

The White Cliffs of Dover confirm the biblical account of a global Flood just about 4,000 years ago. The evidence is apparent when viewed through a biblical perspective.