She may look cute, but the science of genetics is confirming what I’ve always said about her: “She’s a degenerate mutant affected by sin and the Curse.” 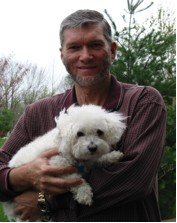 Now, just so you don’t think I hate our little (though mutant) dog, I’ve attached a (yes, rare) photograph of me holding our dog, named “Princess Mintie.” (I don’t hold the dog much—you see, it’s really my wife’s dog, and, officially, I’m not a big dog lover. Unofficially ... well, that’s for you to guess my truer feelings about Mintie!)

She may look cute, but the science of genetics is confirming what I’ve always said about her: “She’s a degenerate mutant affected by sin and the Curse.” Of course, I may personally have what we call in Australia “a dog’s life” once my wife reads this article (in other words, she’ll be upset with me). But if I can use our little dog to help people understand science and the Bible, then surely our dog Mintie can become a hero (actually, a heroine).

“From the towering Great Dane to the feisty little Chihuahua, all dogs are brothers under the skin. Now, researchers have uncovered a reason why the animals wearing that skin vary so much in size .... Lark’s Portuguese water dog, Georgie, had died and he was seeking a new one. Hearing he was a geneticist, the breeder urged him to work on dog genes. So he began the Georgie project, studying the genes of the Portuguese water dog, a breed that comes in a wide range of sizes from 25 pounds to 75 pounds ....”

“Ostrander and colleagues then extended that to a range of large and small breeds and the researchers located a section of DNA that varied between large and small breeds in most cases. Known as a regulatory sequence, the difference is on dog chromosome 15 next to a previously known gene named IGF1, for insulin-like growth factor 1. The hormone controlled by the IGF1 gene helps mammals—including people—grow from birth to adolescence. In small dog breeds a mutation in the sequence next to the gene kept them from growing larger, the researchers said.”

This scientist discovered a mutation that caused certain dog breeds to remain small in size. So now my wife has no option but to admit that our Mintie is a mutant, for the scientist specifically mentioned Mintie’s breed—the bichon frise:

The article also stated (as many other secular articles have done) that “dogs are descended from wolves, having been domesticated 12,000 to 15,000 years ago.” In other words, all dogs share the same gene pool.

So what is the point of all this? Well, as we’ve written many times before (e.g., see the article entitled Did God create poodles?), all dogs are one “kind.” Even though there is great variation within dogs, with many different species and varieties within certain species, all of this variation only occurs within the dog kind. This has nothing to do with molecules–to–man evolution—on the contrary, the processes of natural selection and speciation result in a redistribution of genetic information, or loss of genetic information (or mutations that act on the information that is already there—as in Mintie’s case, to corrupt information). There is no mechanism for brand-new information—which never previously existed—to be added into the gene pool for any kind. While we may see different characteristics (visible in the different species of dogs, like wolves, dingoes, coyotes, foxes, etc.), this is the result of new combinations of information from the original gene pool, not new information itself.

Our domestic dogs (like Mintie) were produced by artificial selection—since humans do the selecting, rather than the environment or other factors. And, as is the case for most of our domestic dogs, we have selected for mutations (basically “mistakes”) that we like!

Another important point to make here is that most mutations (like this one concerning smallness in dogs) result in corruption of information. These are, by and large, detrimental—the opposite of what molecules–to–man evolution requires.

I have a video available online that explains this more fully. You can view it at “Do Animals ‘Evolve’?” Part I.

"Lollies" from Australia, after which we named our dog

By the way, over the years some people have asked me why we call our dog “Mintie.” It’s because we are Australians, and one of our favorite Australian candies (or “lollies” as we say Down Under) is called a “Mintie”—a pure white candy. Mintie, you see, is a white dog—thus the connection!

(By the way, you can buy Minties on the web! Go to http://about-australia-shop.com)

Even genetic studies in dogs confirm what we’d expect from the Bible concerning created kinds and the effects of sin and the Curse! Perhaps the most important thing this “man’s best friend” could ever do is to tell us the truth concerning God’s Word!