Marriage is no longer a sacred institution in America. Increasingly, marriage is viewed as something that’s broken and that just doesn’t work for today’s generation, so, as research indicates, one-fourth of Millennials are likely to never marry. Those who do marry have divorce as an escape route and, sadly, many will choose to use it. Sex, which has traditionally been viewed as exclusively for married couples, has been cheapened to the point where “one-night stands” with relative strangers are acceptable and in many cases expected. Homosexual relations and multiple partners are no longer frowned upon by the culture, and polyamory—basically adultery with consent from your partner—is on the rise. Even among 20-somethings who currently attend church, almost 40% don’t think premarital sex is wrong. What has happened?

What’s Right in My Own Eyes

America, in times past, based its thinking on God’s Word. Morality was largely determined by what God’s Word taught. Marriage and sex were both sacred to the culture because God’s Word views them as sacred. Of course, this doesn’t mean every individual treated marriage and sex with respect. We live in a sin-cursed world and every human being is fallen. The same sins that we see today were there before but the difference is that, generally speaking, the culture held to God’s Word as the moral standard for behavior and choices.

But times have definitely changed. As a whole, our culture has rejected God’s Word as its moral foundation. This was crystalized in Obergefell v. Hodges in June 2015, when the Supreme Court made gay “marriage” legal across the United States. This was the culmination of years of rejecting God’s Word and instead basing morality on man’s ever-changing opinions and reasoning. This is the same attitude that ancient Israel exhibited: “In those days there was no king in Israel; everyone did what was right in his own eyes” (Judges 21:25). In 21st-century America it has become “We don’t want there to be a God in America, so everyone does what’s right in their own eyes.”

OkCupid is a popular dating website that is visited by millions of people each year. Its features are the epitome of America’s changing concepts on marriage, sex, and gender. In 2014 OkCupid launched features allowing users to choose from 22 different gender and 12 sexual orientation options to describe themselves. These include “straight,” “questioning,” “asexual,” “heteroflexible,” “sapiosexual,” “androgynous,” “intersex,” “two spirit,” “transmasculine,” “hijra,” and much more.

In January 2016 the dating site introduced some new options intended to satisfy what they perceive as a growing trend: “Couples Linking.” This new feature allows “people who identify as ‘married,’ ‘seeing someone,’ or ‘in an open relationship’ to find new individuals with whom to have relationships.” Reportedly this new feature is the result of 24% of OkCupid users being “seriously interested” in group sex and 42% being willing to date someone who is already in a relationship. 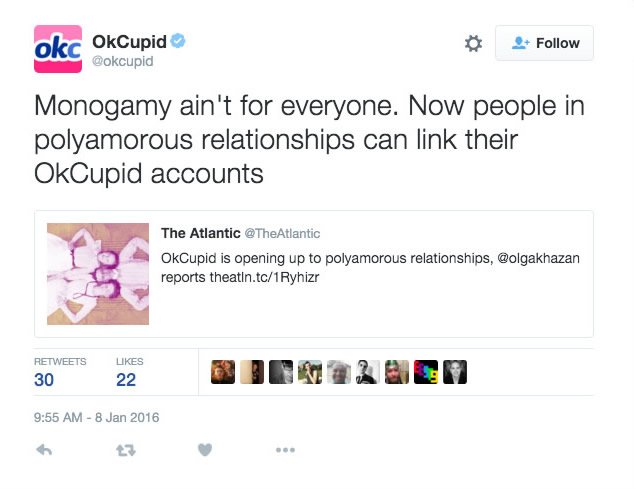 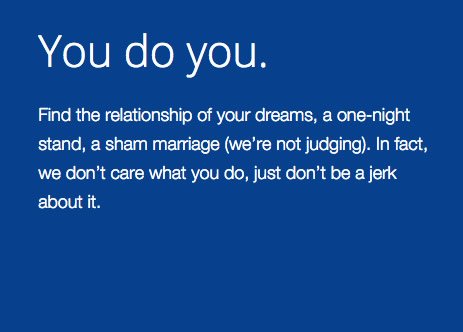 These OkCupid features highlight how far our culture has drifted from God’s view of marriage, sex, and gender. Really, all things have been deemed permissible by our culture, and dating sites are becoming more about gratifying sexual desires then anything else. A common argument for gay “marriage” is “if they love one another . . . ” Acceptable is then based on a purely emotional argument where “love” is used to determine whether or not something is permissible. Of course, if this is the standard, then what is wrong with adultery, bestiality, polyamory, polygamy, or pedophilia? With no absolute standard, “anything goes” as man decides morality based on his own fallible opinions.

But there is an absolute standard for morality—it is found in God’s unchanging Word. Genesis 1 and 2 provide the foundation for marriage. In our culture, so heavily influenced by evolution, marriage is thought to be just another thing that evolved along the way. And if marriage evolved before, then marriage can evolve again. But marriage did not evolve, nor is marriage some outdated government institution or social organization pattern. Marriage is part of God’s “very good” design for humanity.

But for Adam there was not found a helper comparable to him. And the Lord God caused a deep sleep to fall on Adam, and he slept; and He took one of his ribs, and closed up the flesh in its place. Then the rib which the Lord God had taken from man He made into a woman, and He brought her to the man.

This is now bone of my bones
And flesh of my flesh;
She shall be called Woman,
Because she was taken out of Man.

Therefore a man shall leave his father and mother and be joined to his wife, and they shall become one flesh. (Genesis 2:20–24)

Since marriage is God’s institution, only He has the authority to define marriage. And it is clearly defined for us in Genesis as being between one man and one woman for life: “So God created man in His own image; in the image of God He created him; male and female He created them” (Genesis 1:27). Since God defined marriage we do not have the authority as His creation to change His design. And He has defined it as being between one man and one woman (and has reaffirmed this design throughout Scripture, e.g., Matthew 19:4–5). Polygamy, polyamory, and homosexuality are outside of God’s perfect design and are therefore sinful.

These Genesis passages also highlight something else that is not a human institution. It’s a common claim today that gender is fluid and can be whatever we want it to be. But we didn’t invent gender—God did. God created “male and female.” Sadly, sin ruined God’s “very good” (Genesis 1:31) creation and now everything—including gender—is part of a sin-cursed world. But that doesn’t mean that God’s design can be thrown out the window. God’s design has been perverted, and we need to immerse ourselves in God’s Word so that we can recognize error when we see it. The gender confusion so common today is part of the curse of sin that, as with any other sinful behavior or tendency, needs the salvation and restoration that Jesus Christ offers.

Call It What It Is!

“Open relationships” are wrong regardless of consent between the couple. When two people are united in marriage, they become one flesh, and we are commanded not to separate what God has brought together (Matthew 19:6). No matter what name is used, when a married couple, either together or separately, invites another person into their marriage relationship, they’ve committed adultery. One of the Ten Commandments is “Thou shalt not commit adultery” (Exodus 20:14), and Jesus equated looking with lust to adultery (Matthew 5:28). Proverbs says, “whoever commits adultery with a woman lacks understanding; He who does so destroys his own soul,” and warns young men to steer far from the path of the adulterous woman (Proverbs 5). Hebrews is incredibly clear: “Marriage is honorable among all, and the bed undefiled; but fornicators and adulterers God will judge” (Hebrews 13:4). Adultery is a sin, and the result is judgment from God.

Our Safe and Sure Foundation

As Christians, we must not be like our culture, which is being blown about and “tossed to and fro and carried about with every wind of doctrine, by the trickery of men, in the cunning craftiness of deceitful plotting” (Ephesians 4:14). We can stand solidly on the unchanging Word of God and ground our morality in His perfectly good nature.