Same-Sex Unions and the Family

The cultural divide in America concerning the family is growing. Hollywood films and other media have launched an aggressive campaign to normalize same-sex relationships.

TV shows like Queer Eye for the Straight Guy and movies like Brokeback Mountain affirm same-sex relationships, while openly gay TV show hosts like Rosie O’Donnell and Ellen DeGeneres humor our nation. Educational institutions, in the name of tolerance, seek to legitimize these relationships, and our courts and even churches wrestle with the issue.

Various denominations are torn over whether openly gay or lesbian ministers should be allowed to preach from the pulpit. And some U.S. churches have orchestrated a campaign that makes a supposedly Bible-based appeal for acceptance of gays and lesbians. 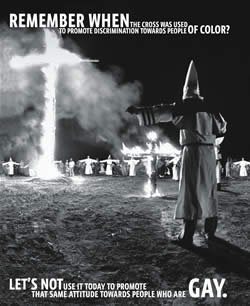 Advertisements in local newspapers in Indiana, Maryland, and North Carolina equated the fight for same-sex marriage with the civil rights battle for African Americans in the 1960s.

In a July 2006 Associated Press article, organizers of the campaign stated that “the effort is the first in a planned series of campaigns across the country aimed at getting people to take a fresh look at the social justice passages in the Bible.”1 In Indianapolis, Indiana (USA), the campaign included billboards and yard signs stating: “Would Jesus discriminate?” A Christian conservative group distributed a responding radio message which said, “Not only did Jesus discriminate, He is going to discriminate again.”1 Although Jesus did not and will not discriminate on the basis of one’s skin color, He did and will discriminate on the basis of an individual’s obedience or disobedience to His Word. His coming judgment will discriminate between the saved and the unsaved.

Advertisements in some local newspapers even equated the issue of same-sex marriage to the civil rights battle against African-Americans in the 1960s.

In the article entitled “It’s Okay to be Gay” the Reverend Dr. Jim Wolfe stated, “When you hear it is wrong to be ‘gay’ or that the Bible condemns ‘homosexuals,’ it is clear that you are getting a message from your culture and that the Bible is being misused to conform to cultural beliefs.”2

Let’s Look at the Source

The mind of God is plainly seen in His original design. Genesis clearly states that God created Adam, a male, and Eve, a female (Genesis 2:7–25). God created two individuals who complemented each other and who were to become one. From physical observation, it is easy to see how a male and a female are made to fit together. Furthermore, the natural reproductive process requires a male and a female. This original design was affirmed by Christ in Matthew 19:4 and Mark 10:6, where Jesus quotes Genesis as literal history. Genesis clearly reveals the foundation for the doctrine of marriage.

The Creator’s design for marriage is affirmed throughout Scripture. Commitment is commanded,3 and roles are clearly delineated.4

In Romans 1:26–27 God identifies same-sex relationships as symptomatic of His giving individuals over to unnatural affections. In Romans 1:17–32 and 3:23, the Apostle Paul discusses the universal sinfulness of mankind. Romans 1 addresses the progressive manifestation of God’s wrath upon a society that rebelled against Him—Romans 1:24, 26 says that God “gave them up,” and Romans 1:28 says that He “gave them over.” Each giving up or giving over statement is God’s response to the disobedience of His created people (Romans 1:21–23, 25, 28). Each instance is negative, not positive.

To define “unnatural” in the context of Romans 1, Christians must compare the affections they were given up to and the natural affections at creation (Romans 1:18–20). God’s design was male and female. Jesus Himself said, “But from the beginning of the creation, God made them male and female” (Mark 10:6). Same-sex desire is unnatural. It goes against the creative order and exchanges the Creator’s position and truth for the creature’s desire (Romans 1:25). Scripturally, same-sex relationships are one of many immoral behaviors that people, even some who are religious, practice in rebellion against God’s original design for the family (1 Corinthians 6:9; 2 Timothy 3:1–7).

Once a person accepts the literal history of Genesis concerning the first marriage being one man and one woman (as affirmed in many other places in the Bible), then it is obvious that same-sex marriage is clearly and consistently forbidden throughout the Scriptures. Leviticus 18:22–23 clearly forbids same-sex relationships. If the Bible is the absolute authority, and if the history in Genesis is true, marriage is to be one man for one woman and same-sex marriage is an abomination.

Sadly, many in the church today no longer believe that the Bible is the absolute authority. Many have taught that Christians must reinterpret God’s Word in order to accommodate evolutionary ideas and millions of years. If God’s Word can be reinterpreted, why can’t the morals in His Word be reinterpreted as well?

God’s Word clearly tells us that same-sex relationships are forbidden; roles for such are never delineated in a positive way and are considered unnatural. Christians must return to the Bible, beginning in Genesis, and live lives of informed faith rather than cultural feelings. Future families depend on it.

All resources available at http://www.cbshouston.edu/

Dr. Charles Ware is Executive Director of Grace Relations and Special Assistant to the President of The College of Biblical Studies. Dr. Ware is a popular speaker and author on critical issues including racism and gay marriage. He is also the author of Prejudice and the People of God. 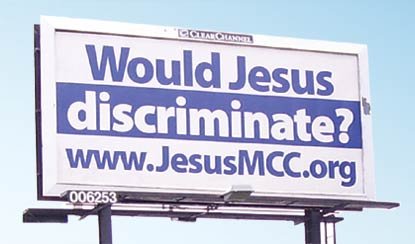 During the summer of 2006, billboards and yard signs in central Indiana posted this question as part of a campaign to increase acceptance for homosexual behavior. Sponsored by the Metropolitan Community Churches (MCC), a predominantly gay and lesbian denomination, the sign was part of a planned national campaign to “get people to take a fresh look at the social justice passages in the Bible.”1 Supporters behind the campaign (Faith in America) claim that some religious teachings have been used to justify slavery, racial segregation, oppression of women, and discrimination against gays and lesbians.