A Former Radical Muslim Reveals Secrets All Christians Must Know

As a former radical Muslim who was heavily involved in the Iranian fundamentalist revolution, Daniel Shayesteh was once committed to exterminating Jews, Christians, and other “infidels.”

Once a radical Muslim political leader (left), Daniel Shayesteh now shares the love of Christ with others through his ministry, Exodus from Darkness (right).

Daniel Shayesteh has experienced a life that few have lived to tell about. He has journeyed from the darkness of godlessness to the light of Christ-centeredness. As a former radical Muslim who was heavily involved in the Iranian fundamentalist revolution, Daniel Shayesteh was once committed to exterminating Jews, Christians, and other “infidels.”

Daniel’s heart was transformed by the love of Christ, and he is now a born-again Christian, committed to helping others understand and properly respond to those immersed in the Islamic faith. This is his amazing story, derived primarily from a recent conversation Daniel had with Ken Ham (president and CEO of Answers in Genesis). 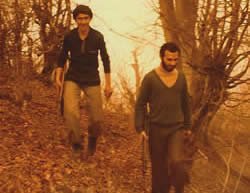 As part of his militant training, Daniel Shayesteh, on the right, once taught terrorist techniques to young Islamic extremists.

Daniel, let’s start by learning a bit about your background. What was life like for you growing up?

Well, I grew up in northern Iran, near the Caspian Sea. My parents wanted me to be a good religious boy. By the age of nine I was able to recite the entire Qur’an (Koran) from the beginning to the end. In my teens, I was a committed Muslim. Through my university years I was very active in the militant Free Islamic Revolutionary Movement. We helped oust the Shah (the king of Iran) in the late 1970s. I closely supported the Ayatollah Khomeini and aided in his rise to power. 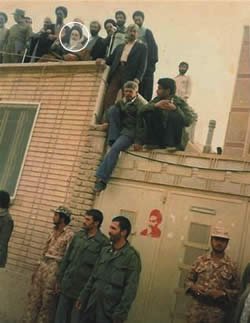 In the 1970s, Daniel supported the Ayatollah Khomeini and helped him rise to power.

So your group took control of the country. Then why did you escape Iran?

In 1980 my colleague Abolhassan Banisadr became the president of our country. But the Ayatollah Khomeini and his radical religious clerics decided they wanted more control of the government, and they began to terrorize and kill the political leaders. I was elected to the Iranian parliament but was never allowed to take office. Eventually, the president escaped to France, but I was kidnapped at nighttime and placed in a cell on death row with four other friends. It was a very terrible prison—one so painful you beg them to kill you. All four of my friends were hanged. But by what I later realized was God’s grace, I was freed from the prison and, after two attempts, escaped from Iran into Turkey.

How did you become a Christian?

Once in Turkey, I had the opportunity to read the Bible, and God revealed Himself to me in an amazing way. Through an evangelical church, God began a great revolution in my mind and my heart. The people in that church were so good to me and showed me that the God in the Bible is a personal God and you can have a relationship with Him here in this life on earth. All other religions and philosophies have left that for the afterlife. It was amazing, and I gave my heart to Jesus. It was a radical decision, and it required a radical change. 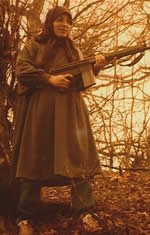 What about your wife and children?

In Islam, becoming a Christian is a death sentence. My wife was amazed, angry, and afraid when I became a Christian. But I prayed and begged the Lord for my wife to give her heart to Jesus. Soon she did. We both were radical Muslims, and we would have, in an instant, been involved directly or indirectly in Jihad (holy war) because that is the doctrine of Islam (Q.9:5, 29–30). But when we both gave our hearts to Jesus, we left Islam (the religion) and entered Christianity (the relationship with Jesus Christ). In time, our three daughters chose to follow Jesus as well. Now, my wife and daughters understand that they were created equal to men, which is contrary to the Qur’an.1 They know that they are precious to God, and because my heart has changed, they are so much more precious to me than they could have been if I had continued to follow the Qur’an and the Islamic faith.

What does the Qur’an teach about the doctrine of creation?

What does the Qur’an say about the origin of man and woman?

Virtually the same as the Bible. He created man from dust and woman from his side. But that has really caused a problem for ladies, because the Islamic doctrine says she’s the crooked rib and you cannot really straighten her.

So how do Muslims view women?

It varies in Muslim culture, but in terms of the Islamic religion the Qur’an declares women to be inferior (Q.2:228, 282). Men can just use their wives the way they want. Some great Muslim scholars say that women are in the same category as mute animals. You can beat your wife. You can lock your wife in a room until she dies. The man owns his wife, since she is like an animal (Q.4:34). Women are just “fields” for man’s production—you just put the seed there and it grows (like a field).

What does the Qur’an teach about the fall of mankind?

According to the Qur’an, Allah inspired sin in humankind, not Satan. And when we read the tradition of Islam, it says sin existed 40 years before the creation.3

What has that led to? What do the Iranian people of today believe about origins?

For the most part they accept evolution. But they also still believe that Allah created. They believe that man evolved from a monkey or something, but it’s still the hand of God.

Why do so few Muslims publicly discuss questions and concerns about the teachings of the Qur’an?

If you criticize the Qur’an, that’s the death penalty (Q.8:10–13; 33:36). You can study it, but you cannot question it. To point out mistakes or inconsistencies is seen as acting adversely to Allah and his Apostle (Mohammed). In the Qur’an, chapter 8 verse 12, it says that your fingers and your head should be chopped off. If the scholars are asked about such things, they quickly change the discussion and go to another topic because, in Islam, you cannot question the authority of the Qur’an and Mohammed. There is tremendous pressure and fear.

How does the Qur’an say a person can go to Heaven?

In chapter 19 it says that Allah sends both the righteous and the unrighteous first to Hell. From there, if their good deeds outweigh their bad deeds, and if they are able to cross a tiny bridge to Heaven—a bridge that is as thin as your hair—then they go to paradise. If not, they fall into the fire.

What are the main differences between Jesus Christ and Mohammed?

The Qur’an itself says that the great prophet Mohammed (AD 570–632) was a sinner. Mohammed did not know whether he would go to Heaven or to Hell (Q.46:9). But even the Qur’an says that Jesus was perfect and holy and that He is living in Heaven (19:16–33). Many Muslims have come to the Lord Jesus, and this is one of the reasons. Why should they follow a dead sinner when they can have a relationship with the living Son of God who was perfect and now lives in Heaven!

Daniel testifies that he once lived in a very great darkness. In that darkness, there was no true happiness. He now lives in the light of truth, where he has found true joy. He has become a new creation in Christ, and if you meet him, you will see joy-filled eyes and an ever-widening smile … where, not so very long ago, was anger and hatred.

To read more from the conversation between Ken Ham and Daniel Shayesteh, see Escape from Darkness (expanded version).

Daniel Shayesteh, PhD, studied in Tehran and later in Turkey. He holds a doctorate in international business and majors in how culture and religion influence business and human attitudes. He was a professor at UTS University in Sydney for eight years and currently lives in America. He has written three books. Today, he travels throughout the world to reveal the falsehood of Islam and shine the light of truth. Contact Dr. Shayesteh's ministry, Exodus from Darkness, via its website at www.exodusfromdarkness.org to receive his speaking calendar or to learn how your church or group can host a meeting or community event.