Ms. Frizzle and her students are back. But instead of traveling to rainforests, zoos, or outer space, this time they’re learning about evolution. The highly anticipated book The Magic School Bus Explores Human Evolution is set to release July 2020.

Though in 2017 Netflix released the television spinoff The Magic School Bus Rides Again, the last time we heard from the book series was 2010. 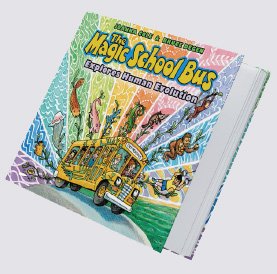 Why talk about evolution now? Author of the series Joanna Cole and illustrator Bruce Degen explained to PBS News Hour that the overall goal of The Magic School Bus is to explore controversial topics. Ten years ago, they presented climate change, and now it’s time for evolution.

In the interview with PBS News Hour, Cole explains that the book will start with one of the students wishing he knew more about his ancestry. “Ms. Frizzle answers that wish by taking the kids back in time, to meet their very first ancestors. It starts 3.5 billion years ago, and brings them from simple cells to modern humans, with lots of amazing stops in between.”

Degen expects the book to spark some controversy.

“There are people who object to evolution, because it contradicts their ideas that come out of their religious beliefs. . . . But the decision we’ve always had is that we have to go with good science. And we should not make it a false equivalency of ‘he said, she said.’ Let’s face it, most scientists believe the planet is billions of years old, and that’s a fact.”’

Instead of teaching children that they came from some imaginary first cell billions of years ago, we should teach them the truth of their origin: they were created by God and are descendants of the first two people, Adam and Eve (Genesis 1:31). That truth is found in a timeless book—God’s Word.