A recently discovered ink sac from a “Jurassic-era” squid is more evidence of rapid burial in a recent watery catastrophe.

A “Jurassic-age” squid, alleged to have lived in the ocean 150 million years ago, brought forth a surprise last year: its incredibly well-preserved ink sac. The squid had a sac filled with ink (in solid form), prompting an evolutionist to declare that it “is difficult to imagine how you can have something as soft and sloppy as an ink sac fossilized in three dimension[s], still black, and inside a rock that is 150 million years old.”*

Not only was the sac well preserved, but scientists converted the ink back into a liquid (with ammonia) and drew a picture of the species with the ink! 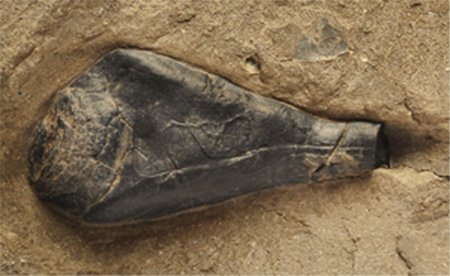 A fossil of a squid claimed to be 150 million years old, contains an ink sac that shows rapid burial and fossilization. Reproduced by permission of the British Geological Survey © NERC

The remarkable discovery is a testament to the validity of creationist paleontology. It shows rapid burial and fossilization by catastrophic processes, which would be expected during Noah’s Flood. In addition, such quick preservation made this creature easily identifiable as one of the created kinds of squids.