Dr Andy McIntosh is a Reader (second-highest teaching/research rank in UK university hierarchy) in Combustion Theory at Leeds University, UK with a background in aerodynamics.

Dr McIntosh [AM]: Anything which works and uses energy has to have power, so power generation is a very important matter. Whether it’s coal or nuclear energy, we need to know how to use it carefully, efficiently and without danger. Now, it’s the ‘without danger’ bit where I come in. I’ve done a lot of studies in explosions and hazards of various kinds.

[AM]: Like if coal is transported in ships, and is left too long with air able to get at it, then because there isn’t enough room to get rid of the heat, the coal gradually heats up and you can have a fire at sea. It involves some interesting problems.

But you’re visiting Australia to talk to other scientific people about applied mathematics, aren’t you?

I enjoy playing around with the equations, but I really like getting my feet down to the ground and talking with real people about real problems. Leeds University is known all over the world for its interest in practical problems in the energy scene.

I’m part of a Centre of Combustion there which straddles three departments—physical chemistry, mechanical engineering, and fuel and energy—and it’s my job to make sure that centre works. We have research seminars, and I track through students doing a year’s Master of Science degree, for example.

I understand that you’re dubious about evolution?

I guess that’s an understatement, Chris. I’m not saying that the studies of scientists who work on evolution theory are all wrong. It’s just that they’re starting with certain assumptions, and that’s what needs to be exposed.

Can you give an example of a misleading assumption?

One of their basic premises is that you cannot have design, it’s ruled out of court. Now to my mind it is crazy to dismiss something without even letting it be a possible option. Many aspects of nature show that creatures have been designed.

Creatures which fly. I got here to Australia on a great big jumbo jet. I watched the careful maneuvering as it came down to land, as the great big flaps came out at the back, increasing the size of the wing to get more lift so as to fly at a much slower speed. I was struck by all the design that went into that wing in order to make sure it worked. Now, are we to say that the birds which come to land every day weren’t designed? I have seen a photo in a book, of an aircraft landing at Hong Kong and underneath it is a falcon landing at the same time. Now as you look at birds and planes together, are you going to say that one is designed and the other isn’t? I would find that scientifically preposterous.

We know that in order for modern flight to take place, countless thousands of man-hours and much high technology had to go into the design process.

Indeed—I would take issue with people like [atheistic Oxford professor] Richard Dawkins, with his view that flight somehow came about by chance, just because some creature took a jump, then mutation added bits to its structure, so it could jump further, and so on. It just doesn’t fit. It’s obvious that these creatures have not come about by chance and selection, but have in fact been designed.

What does the fossil record show about this? 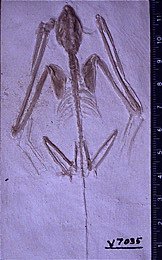 You find that those creatures which are flying now and are also fossilized in the rocks were essentially the same then as they are now. There is no sign at all of any gradual evolutionary change. Butterflies are exactly the same in the fossil record. And yet it’s claimed (I don’t accept it at all) that they are hundreds of millions of years old. When it comes to birds, they’re essentially, structure-wise, the same. And bats are exactly the same in the fossil record as they are today. [See picture of ‘earliest’ bat, Icaronycteris index, right, which even had a sonar system.]

Why the particular interest in flight?

Well, I am originally an aerodynamicist—my Ph.D. was in an aerodynamics department. Bird flight in particular is remarkable; consider feathers. If you look at a feather under a microscope, you see the main stem, with barbs coming out to the left and right, and from these you have left-and right-handed barbules. Now the interesting bit is that the left-handed ones have hooks, and the right-handed ones have ridges.

That’s so the feathers lock together.

That’s right. The feather is made such that if you bend it, everything bends with it, and yet it’s a very light structure. So the hooks catch the ridges and they slide over the ridges—it’s a mechanical engineer’s dream to have such useful, lightweight engineering. But if you have a sliding joint, you need lubrication. To do this the bird twists its neck around 180° and dips its beak into a tiny oil gland right down at the back of its spine. It then preens itself, wiping this oil all over its feathers, so that they join together nicely, and these sliding joints are oiled. That’s a marvellous bit of engineering. So is the fact that birds, unlike us, have hollow bones. To be strong enough, particularly in the bigger birds, these lightweight bones often have cross-members. In aircraft we call the design ‘Warren’s truss’, but we copied it from birds in the first place.

A feather under the microscope at two levels of magnification [magnified 80 (left) and 20,000 times (right)], showing the amazing intricacy of design. The interlocking hooks and barbules allow the feather to be ‘reset’ by the bird's preening action. Photos courtesy of David Menton.

So the incredible design in living things is a major objection to evolution?

Absolutely. I would say, frankly, that that’s the major scientific reason why I could not for a moment hold to evolution. Design is shouting at me everywhere.

What about Andy McIntosh the Christian?

Genesis gives us the basis for the only correct way to look at the world, because God has told us how everything came to be. We are not at liberty, as Christians, to think that there is a ‘both … and’ situation here. Evolution and long ages is completely contrary to what the Bible says.

That would sound radical to some.

Maybe, but it wasn’t radical a hundred years back. Genesis creation is in fact what our society was based upon, the whole of Western culture. Now we are very wrong to throw it overboard. Thomas Huxley [‘Darwin’s bulldog’—Ed.] knew full well last century that the way to undermine Christianity was to attack Genesis. Of course, he was very successful in getting his own thinking to usurp the authority of the Bible, and we are now reaping the results.

What about the fossils—don’t they suggest a long time period?

In fact, I find it very difficult to believe that fossils formed slowly. The alternative way of looking at the rocks is to believe what the Bible tells us about a massive catastrophic Flood, and there is a lot of evidence to support that view. For instance, we have jellyfish as fossils. Now you’ve got to bury a jellyfish quickly in order to leave its impression behind. It just won’t last long enough to be slowly covered.

So you believe in a world created about 6,000 years ago, cursed on account of sin, then devastated by Noah’s Flood.

Absolutely. There’s nothing in real science (if you take all the assumptions into account) to contradict that view.

What would you say, as a physical scientist, about radiometric dating?

Something’s wrong with the radioactive dating method. They’ve dated New Zealand volcanic lava which we know flowed last century and the result says it hardened millions of years ago [see the technical article: The Cause Of Anomalous Potassium-Argon “Ages” for recent andesite flows at Mt. Ngauruhoe, New Zealand, and the Implications for Potassium-Argon “Dating”]. The same occurred with the lava dome that’s formed at Mt St Helens since the 1980 eruption [see the technical article: “Excess Argon Within Mineral Concentrates from the New Dacite Lava Dome at Mount St Helens Volcano”]. We can’t trust the methods—the assumptions behind them are clearly shaky. It’s a shame that some Christians today are being pressurised into doubting the Word of God, which is infallible, because of these fallible methods.

Insects—defying the laws of aerodynamics?

It has often been said that, according to the laws of aerodynamics, insects shouldn’t be able to fly. But of course they do—brilliantly. Actually, that only highlighted our ignorance of aerodynamics. Research over the past few years is revealing how insects do manage to fly in ways which put the achievements and maneuverability of our most advanced aircraft to shame.

Conventional analysis showed that insects were generating only about one-half to one-third of the lift needed to carry their weight. However, ingenious experiments have now shown unexpected patterns of vortex flow along the edges of insect wings.

These generate the extra lift needed because the vortex (a spiralling tube-like pattern of airflow like a mini-tornado) stays ‘stuck’ to the leading edge of the wing for long enough.1 At this point, no one knows how or why this particular vortex phenomenon occurs, but researchers have been able to see it in a robot model of a moth’s wing inside a wind tunnel.

One reason why previous models failed to detect how insects could fly is that they used fixed wings. However, insect wings have a very complex motion, rotating and changing the camber. It required sophisticated programming to make the ‘robot insect’ flap properly. This demonstrates how sophisticated the (created) design of actual insect flight must be.