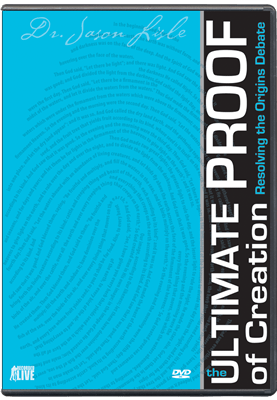 The Ultimate Proof of Creation
In this companion DVD to his book by the same name, Dr. Lisle presents an ultimate proof for the existence of God and the truth of creation.

Evolutionists like Dr. Richard Dawkins speak authoritatively as if their not-even-theory were as good as fact. But building a case for naturalistic evolution is like trying to build a house in midair. No matter how solid the construction, the house will collapse without a foundation. Thus, evolutionists must assume biblical grounds to support their worldview. These biblical grounds—such as logic, morality, and uniformity—stem from the nature and power of the Creator God as revealed in the Bible.1 Yet evolutionists deny the Creator while resting their faulty beliefs on His foundation. By challenging their faulty basic assumptions that the laws of logic, absolute morality, and the uniformity of nature exist apart from the Creator, the Christian can prove that reasoning, absolute moral standards, and science itself must be based on the biblical worldview.

Evolutionist Assumption #1: Assuming God’s laws of logic to argue for a godless universe

It is ironic that evolutionists argue passionately for a naturalistic universe. If we are just bundles of chemical reactions in a meaningless world, why would it matter what we believe? Evolutionists seek to defend and prove their worldview because they inherently know the Creator yet suppress the truth in order to rebel against His authority (Romans 1:18–20). Their very act of trying to persuade, which requires the laws of logic, confirms the existence of the biblical God.

All reasoning must be based on the laws of logic, which are the tools we use to reason correctly and identify fallacious arguments. For example, according to one of the laws of logic, the law of non-contradiction, two contradictory statements cannot both be true at the same time and in the same sense. Without laws of logic, a discussion would be useless nonsense. Any meaningful communication assumes these laws.

While an evolutionist might seek to explain the laws of logic apart from the biblical God, his explanations fall short. If the universe consists of only matter in motion, abstract laws of logic would not exist, and no one could prove anything.2 Of course, the evolutionist does use laws of logic as he tries to defend his worldview. As Dr. Jason Lisle said, “The fact that he is able to make an argument at all proves that he is wrong.”2

To challenge the first basic assumption, ask your evolutionist friend, “On what basis do you assume the laws of logic?” Explain that having been created in God’s image, he is using the laws of logic that come from the Creator.

It is ironic that evolutionists teach that man is a chance product of evolutionary struggle and death, yet they decry crimes like murder, rape, and theft. According to their worldview, why would those acts be crimes? After all, mankind is supposedly just an advanced animal, and we don’t imprison cheetahs for killing gazelles or bring raccoons to court for stealing chicken eggs. Why shouldn’t we act according to our chemical impulses to fulfill our evolutionary end of the survival of the fittest? In fact, if the evolutionary view were true, we must act according to those chemical impulses; therefore, no one should be held accountable for his actions.

An evolutionary worldview supports relative morality, the idea that no ultimate standards exist.

An evolutionary worldview supports relative morality, the idea that no ultimate standards exist. An evolutionist may give lip service to the idea of relativism, but he expects absolute morality from others. If he doesn’t think so, tell him you’ll take his wallet. He inherently knows absolute standards of right and wrong because God has given him a conscience (Romans 1:32; 2:15).

While some evolutionists try to offer alternatives, only the biblical worldview can uphold absolute morality. Because God created us for His glory, we are responsible to live according to His perfect standard. Instead, we all have rebelled against God and fall short of His glory (Romans 3:23). Man’s sin brought the curse of suffering and death into the world (Romans 6:23). Yet God sent His own Son to perfectly fulfill His standard and take the punishment for believing sinners by dying on the Cross and then rising victoriously from the grave (Colossians 1:21–22).

Evolutionist Assumption #3: Assuming the order in the universe came from disorder

It is ironic that evolutionists often poke fun of “dark age creation science” when they could not even practice science apart from the biblical God. Scientific study is based on the uniformity of nature: the laws of nature do not arbitrarily change with time and space.4 Otherwise, how could scientists experiment and make predictions if physical laws didn’t operate consistently? Uniformity makes no sense in a random chance world of evolution. How can the evolutionist assume that the future will reflect the past in a mindless world begun with a big bang?

To challenge the third basic assumption, ask your evolutionist friend, “On what basis do you assume the uniformity of nature?” Explain that his assumption of uniformity is actually based on the biblical worldview. Whether a scientist denies or believes in Him, God sustaining the universe through physical laws is the only reason science is possible.

In conclusion, the title of this article, “Never Assume,” is a bit of a misnomer because everyone has basic assumptions. The Christian assumes the truth of God’s revealed Word, whereas the non-Christian must assume the truth of man’s opinions. In fact, the non-Christian’s most basic assumptions actually rest on biblical truth. Standing on biblical ground and showing non-Christians that they, too, are standing there is the ultimate approach to defending the faith.

Evolutionists may never be persuaded by evidence alone, since they interpret the evidence according to their worldview. But by challenging their worldview, you can show that their assumptions—from logic to absolute morality to uniformity—are actually resting on biblical ground. Stand firm on the Word of God, respectfully challenge their assumptions, and ask the Lord to help them see His Word is true.