“Doubting Evolution Is like Believing the Earth Is Flat.”

Ironically, the Bible describes the earth as round and hanging in space—long before this could have been directly observed (Job 26:10; Isaiah 40:22). The appeal of this claim is that it stereotypes creationists as stuck in the past, since the common assumption is that people once universally believed the earth was flat before science “proved” otherwise (which wasn’t the case—only a few bought into the idea that the earth was flat). But even if this were true (it’s not), direct, repeatable observation shows us the earth is round and orbiting the sun. Evolutionary stories about fossils are not direct observations; they’re assumption-based beliefs.1

To misrepresent and discredit creationists by comparing their position to a belief in a flat earth is a straw-man fallacy. The fact that some people in history believed the earth to be flat highlights the fallibility of man’s reasoning. Throughout history, scientists’ confident assertions have later been disproven, such as the common medical practice of bloodletting or the futile quest of alchemists to turn common metals into gold. 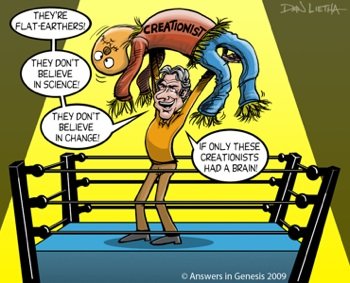 Scientists today are not exempt. We often elevate people in white lab coats as if their conclusions were inerrant. But an extensive education and high IQ can’t overcome any human’s inherent limitations. Scientific findings today are often contested or disproven. No matter how precisely the scientific method is followed or how carefully the variables are controlled, the margin for error cannot be eliminated. How much greater the margin for error when scientists seek to make conclusions about events of the past?

Particle-to-person evolution is a belief system built on assumptions about the past. It cannot be tested by the scientific method. Therefore, those who doubt it are not anti-science. Rather than trusting man’s philosophy about the past, biblical creationists trust the Word of the Creator.

Detractors of the Bible might point to passages like Isaiah 11:12, Revelation 7:1, and Revelation 20:8 to claim that the Bible teaches a flat earth. But the phrase, “the four corners of the earth,” must be interpreted within its context, and figurative language must be recognized. When the historical-grammatical approach is followed, “the four corners of the earth” is identified as a figure of speech describing the whole word using the cardinal directions (such as on a compass) from north and south to east and west. The passages are all within prophetic books, which are known for using poetic language.

Interpreting the Bible literally doesn’t mean ignoring figurative language of which the Bible is rich (e.g., 1 Samuel 2:8 and Psalm 75:3 poetically describe the earth as sitting on pillars that God founded). After all, if someone says the sun has set, we don’t accuse him of not understanding that it is the earth that is spinning around the sun.

Being inspired by God the Creator, Scripture describes our globe accurately—including its shape. Passages like Job 26:10, Proverbs 8:27, and Isaiah 40:22 describe the earth’s shape accurately.

Astrophysicist Dr. Jason Lisle made some observations about these passages:

The Bible indicates that the earth is round. Consider Isaiah 40:22 which mentions the “circle of the earth.” This description is certainly fitting—particularly when the earth is viewed from space; the earth always appears as a circle since it is round. 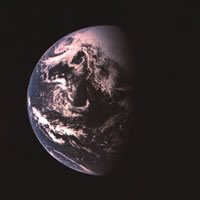 Another verse that indicates the spherical nature of our planet is Job 26:10. This verse teaches that God has inscribed a circle on the surface of the waters at the boundary of light and darkness. This boundary between light and darkness (day and night) is called the “terminator” since the light stops or “terminates” there. Someone standing on the terminator would be experiencing either a sunrise or a sunset; they are going from day to night or from night to day. The terminator is always a circle, because the earth is round.

One of the great delights of observing the moon through a small telescope is to look at its terminator, especially during the first or third quarter phases when the terminator is directly down the middle of the moon. The craters are most easily seen at this boundary since the sun is at a low angle and casts very long shadows there. The moon looks particularly three-dimensional when viewed through a telescope during these phases; it is clear that the moon is a sphere—not a flat disk (see photo below). 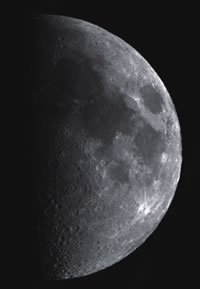 For the earth, the terminator occurs not on a cratered rocky surface, but primarily on water (since the earth’s surface is 70 percent water). Job 26:10 suggests a “God’s eye” view of the earth. This biblical passage would be nonsense if the earth were flat, since there would be no true terminator; there is no line to “step over” that separates the day from night on a flat surface. Either it is day everywhere or night everywhere on a hypothetical “flat earth.” However, the earth does indeed have a boundary between light and darkness which is always a circle since the earth is round.

Curiously, many astronomy textbooks credit Pythagoras (c. 570–500 BC) with being the first person to assert that the earth is round. However, the biblical passages are older than this. Isaiah is generally acknowledged to have been written in the 700s BC and Job is thought to have been written around 2000 BC The secular astronomers before the time of Pythagoras must have thought the Bible was wrong about its teaching of a round earth, yet the Bible was exactly right. It was the secular science of the day that needed to be corrected.2

Creation displays God’s handiwork and brings Him glory (Psalm 19). But creation is not the focus of Scripture. Scripture showcases Christ in His mission to redeem sinful men. He is the omnipotent Creator, gracious Savior, and risen Lord. If a scientist were to win worldwide acclaim for his findings, of what worth would that be if he failed to discover the One in whom “all things hold together” (Colossians 1:17)? Jesus said, “For what does it profit a man to gain the whole world and forfeit his soul?” (Mark 8:36). Saving sinners through faith and repentance in the Lord Jesus was God’s plan before the beginning of time: “In hope of eternal life, which God, who never lies, promised before the ages began” (Titus 1:2).

Previous Article “Doubting Evolution Is like Doubting Gravity.” Next Article “It’s Here, so It Must Have Evolved.”