Fossils like thousands of “blobs with toes” mark the presence of dinosaur diversity in the Alaskan past.

Dinosaur tracks are always a fun discovery, exciting the imagination with curiosity about where they were going and what they were doing. For paleontologists, the spacing and variety of such tracks can offer a clue to the size and diversity of the dinosaurs that made them. Hence the recent discovery of a veritable gold mine of dinosaur tracks along Alaska’s Yukon River has scientists from the University of Alaska Museum of the North pretty excited.

Alaska has many fossilized dinosaur tracks and bird tracks elsewhere, preserved in Upper Cretaceous rock conventionally dated at 65 million to 80 million years. Those discoveries began in 2005 in Denali National Park in the Alaskan Interior. The fourteen-person Museum of the North team, explorers’ permit in hand, set out in July to hunt for more tracks on a two-week, 500-mile trek down the banks of the Tanana and Yukon Rivers. The expedition netted a whopping 2,000 pounds of rock containing thousands of dinosaur footprints.

The museum’s earth sciences curator Pat Druckenmiller said, “We found a great diversity of dinosaur types, evidence of an extinct ecosystem we never knew existed.” Expedition researcher Paul McCarthy added, “We found dinosaur footprints by the scores on literally every outcrop we stopped at. I’ve seen dinosaur footprints in Alaska now in rocks from southwest Alaska, the North Slope and Denali National Park in the Interior, but there aren’t many places where footprints occur in such abundance.” McCarthy said that in contrast to the more elusive, harder-to-find tracks elsewhere in Alaska, “the tracks were so abundant along the Yukon River that we could find and collect as many as 50 specimens in as little as 10 minutes.”

Because these fossils were “natural casts” apparently formed when cement-like sand filled the dinosaurs’ footprints in mud, Druckenmiller said the resulting rock reliefs look like “blobs with toes.” The team believes the strata in which the prints were found are 25 to 30 million years older than other known dinosaur tracks in Alaska. 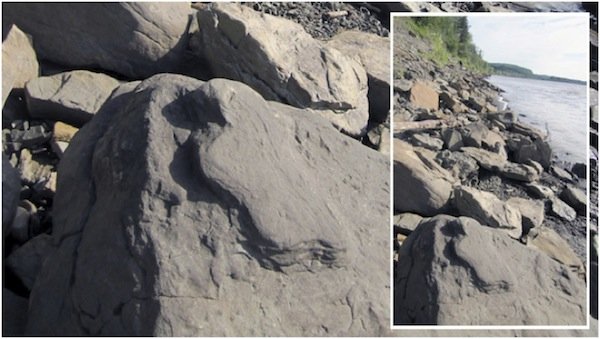 This fossilized cast of a dinosaur’s footprint is one of thousands found this summer along Alaska’s Yukon River. Museum of the North curator Pat Druckenmiller says the fossils look like “blobs with toes.” Image by Pat Druckenmiller through FOX News.

Of course, exploration of the area will continue, and much remains to be done to study the 2,000 pounds of dinosaur tracks recovered this summer. Researchers aren’t sure what kinds of dinosaurs are represented in the group. There is great variety among the prints, however, and they include prints of dinosaurs generally regarded as carnivorous and others thought to be large herbivores. But Druckenmiller notes that without fossils of actual dinosaurs to go with the tracks, a rare find indeed, identification of the track-makers will remain speculative.1

Fossilizing Footprints and the Global Flood

Obviously we don’t see animal tracks turn into fossils every day, so what sort of conditions would promote preservation of dinosaur tracks like this? The footprints, having been pressed into a material with reasonable cement-like qualities, would need to be rapidly buried. But how can the cast of such a footprint get preserved as a fossil? For those that believe slow geologic processes cause fossilization, there is the question of why footprints wouldn’t erode or be simply dissipated by lengthy exposure to the elements before they could be preserved. For young-earth creationists who believe that most fossils formed during the Flood or in its aftermath, there is the question of why the turbulent Floodwaters failed to obliterate the footprints.

The biblical history of the global Flood actually makes sense of discoveries like these.

The biblical history of the global Flood actually makes sense of discoveries like these. As described in Genesis chapters 6–9, the Flood’s waters did not rise up to cover the entire earth overnight but took time. As the catastrophe engulfed the surface of the earth, volcanic activity—suggested by the fact that the “fountains of the great deep” (Genesis 7:11) opened up—and earthquakes would have triggered great tsunamis and violently surging waters that rose over a period of weeks. Thus, mineral-rich water would have surged over various habitats, perhaps resulting in fleeing animals leaving their footprints in wet surfaces temporarily exposed during tidal fluctuations or lulls between the violent upheavals of water. Sand hauled in by surging Flood waters would have rapidly filled many of these footprints and, under great pressure, compressed and set them like quick-setting cement.

Answers in Genesis geologist Dr. Andrew Snelling, describing the rock layer in which these tracks were reportedly discovered, explains, “Mid-Cretaceous rock layers were not laid down during the onset of the Flood, but our best guess currently is not long before Day 150.”

Furthermore, as seen along Alaska’s Yukon River, fossil tracks are not usually found in the same deposits as corresponding skeletons. We would expect the bodies that match the fossils to have been swept away and generally buried in sediment deposits above the level of the tracks.

Regarding this discovery, Dr. Snelling comments,

These dinosaur tracks aren’t all that surprising, given there must have been lots of dinosaurs and other animals by the time of the Flood. The fact that they left footprints is testimony to many animals being alive in the Flood waters for some time after the Flood began, and to fluctuations in the Flood water levels that allowed these dinosaurs to occasionally walk on temporarily exposed sediment surfaces. The fact that so many tracks are found at the same levels indicates lots of dinosaurs were walking across exposed sediment surfaces all at once over large areas, before they eventually expired in the Flood waters.

These layers of rock in the fossil record, when stripped of the worldview-based millions-of-years dates conventionally attached to them, correspond not to millions of years of evolving ecosystems but to burial of dinosaurs at somewhat different times during the early part of the global Flood that drastically changed the earth’s surface over the course of just a year.

“As it was in the days of Noah”

The dinosaurs whose tracks are preserved in Alaska did not escape the judgment that fell on the earth as a result of man’s rebellion against God. In the days of Noah, only eight people (1 Peter 3:20) availed themselves of God’s mercy. And while God assures us there will never be another global Flood to destroy the earth (Genesis 9:12–15), His Word declares that every human still deserves God’s judgment for sin (Romans 3:23, 6:23). God still beckons us to flee the wrath to come (1 Thessalonians 1:9–10) through His grace available in Jesus Christ. As these fossilized footprints are all that remain of so many dinosaurs, this should remind us of the stark reality of judgment and the importance of receiving God’s grace today (2 Corinthians 6:2).