For the past three years, creationists have covered the discovery of soft tissue inside a Tyrannosaurus rex thigh bone. This is startling evidence that the dinosaurs are not as old as most evolutionists would say. If dinosaurs were millions of years old, the soft tissue of the T. rex would have surely disappeared long ago. 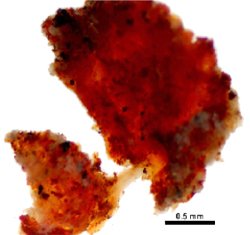 Whether the sample found inside a T. rex thigh bone (right) is soft tissue or “bacterial biofilm,” the results are the same: it’s easier to explain if the dinosaur died thousands of years ago.

A few scientists have now cast some doubt on the dinosaur tissue find. They believe that rather than tissue, it is microscopic, iron-containing mineral spheres. As for the stretchy material, identified originally as collagen, these researchers believe it is actually “bacterial biofilm.” The suggestion is that bacteria grew inside the spaces once occupied by the T. rex’s blood vessels and produced the biofilm.

But even if these new claims are substantiated, the same kind of question remains: How was the bacterial biofilm itself preserved over the millions of years allegedly associated with a dinosaur fossil? The bones still speak volumes against the old-age belief system and in support of the chronology of Genesis.