“Yee-haw” and “giddy-up” may come to mind when we think of cowboys, but “creation” comes to mind among those who know South Dakota ranchers Stuart and Lisa Schmidt. How does cowboy life intersect with creation? Dinosaurs. Stuart has been fascinated by them ever since he discovered a dinosaur bone jutting out of the ground as a young yahoo. Their remains are everywhere in South Dakota.

As Bible-believing Christians, Stuart and his wife, Lisa, know what dumped all those dinosaurs into a vast graveyard at their ranch—the worldwide Flood of Noah’s day. One day they decided to promote that truth in a way that fits their area: a cowboy museum that teaches creation.

Several teams have come to study the trove of dinosaur fossils at their ranch.

Stuart and Lisa have also opened their property to creation research. Several teams have come to study the trove of dinosaur fossils along the banks of the Grand River at their ranch. Volunteers prepare the fossils for display at the Grand River Museum, which the Schmidts opened in 1998, where guests learn about the One who created these massive marvels.

A whimsical sculpture of a cowboy riding a dinosaur greets museum visitors and gives them a taste of what’s coming. The work was created by renowned local artist John Lopez, who is famous for his beautiful and imaginative creations from “junk” metal parts.

The Grand River Museum’s focus is local history and the real life of cowboys, but the dinosaurs bring creation into the mix. The spectacular Pachycephalosaurus and Triceratops skulls on display, like so many other fossils on area ranches, provide a perfect lead-in to discuss creation and the Flood. Humans and dinosaurs did, indeed, once live together. 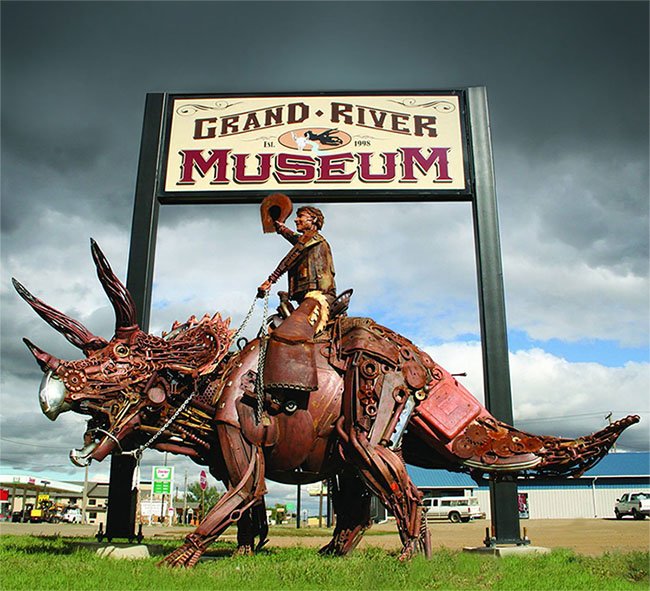