I often ask Christian audiences — did Kangaroos once live in the Middle East? Usually I find that very few, if any, put their hands up in agreement.

I then ask them if they believe Noah's Flood was real, and that two of every kind of land-dwelling, air-breathing animal got on board the Ark. Up go the hands. They also agree that kangaroos were included, but by now I hear a few snickers of laughter as some start to realize what I am getting at.

I then ask them to think about where the Ark landed—now who thinks kangaroos once lived in the Middle East?1 There is much laughter as most hands go up, realizing their original mistake.

Why do most answer incorrectly at first? I suggest it is because all of us as Christians have been so secularized and evolutionized, that we are not thinking with a Christian world view at all. We have been indoctrinated by our education system, media, and even Christian leaders in many instances, to accept ideas developed outside of the Bible, and then somehow add God to this thinking, rather than beginning our thinking with the Bible.

The Bible is a revelation from the One who is infinite in knowledge and wisdom (1 Colossians 2:3), so ultimately, the only way to develop right conclusions about this universe is to ensure that God's Word is foundational to all of our thinking in every area.

Sadly, most Christians have not been taught to think in this way, so we by and large don't know how to give answers to rather simple questions or defend our faith.

For instance, I have found that most Christians are mystified at how to explain dinosaurs. However, if we know God's Word, we can make many authoritative statements about dinosaurs.

Think about this. Does the Bible tell us when dinosaurs first appeared, or what the first Tyrannosaurus Rex ate? Most Christians emphatically say 'No!' However, the Bible does provide a logical basis for answering such questions.

There was no death and bloodshed of man or animals before sin. So the dinosaurs whose bones we find could not have died millions of years before Adam.

The Bible tells us in Genesis, and again in Exodus 20:11, that everything was made in the same six days as Adam and Eve. This means, on the authority of God's Word, not based on opinion, we can state for certain that dinosaurs lived beside the first people, just thousands of years ago.

We are also told in Genesis 1:29–30 that Adam and Eve, and all the animals, were to have vegetarian diets. So T. Rex was originally a herbivore!

Now let me ask you a multiple choice question which you should all get right. Where was the Garden of Eden located?

Most Christians, including pastors, whether in America, Australia, or England, give answer 'd'. However, the correct answer is 'e'.

It is true that most Bible commentaries I've looked at, Bible Colleges and the like, teach answer 'd'.

However, the Genesis description is:

And a river went out of Eden to water the garden; and from thence it was parted, and became into four heads.

Fig. 1 is a map showing where the Tigris and Euphrates rivers are today — the description from Genesis does not fit this geographical area. In any case, these rivers flow on top of thousands of feet of sediment containing billions of dead things — fossil layers that we believe originated from Noah's Flood.

This catastrophe would have so destroyed the world, scouring the rocks and depositing material up to miles thick in places, that the present world really bears no resemblance geographically to the original one.

People travelling to new lands often take the names of familiar places from their old world (e.g. England) to their new location (e.g. Australia). Similarly, it would make sense for the post-Flood population to use some names from before the Flood (e.g. Tigris and Euphrates) in the area in which they first settled.2

We really have been secularized and evolutionized, haven't we? Second Peter 3:3–4 talks about those scoffers (e.g. evolutionists) to come who would be 'willingly ignorant' (vv. 5–6) of Noah's Flood:

Knowing this first, that there shall come in the last days scoffers, walking after their own lusts, And saying, Where is the promise of his coming? for since the fathers fell asleep, all things continue as they were from the beginning of the creation.

However, most Christians were among those taught, until recently, that no drastic changes have occurred in the earth — things have just continued on and on for millions of years. Based on Charles Lyell's famous dictum 'the present is the key to the past', we have been taught to look at present processes to determine what happened in the past.

The present is not the key to the past; revelation is the key to knowing what happened in the past.

Thus many Christians believe (on one level) what the Book of Genesis tells us concerning sin, the entrance of death, a young earth, and the global Flood judgment, while on another level they judge the Bible by present processes. For instance, many look at today's world and say, 'How could there have been no death before sin, when we have these animals that eat each other and have defence mechanisms, etc?' Rather, we should be saying, 'Because of what the Bible says, I can now understand why I see a world of death and struggle.' In other words, the present is not the key to the past; revelation is the key to knowing what happened in the past. 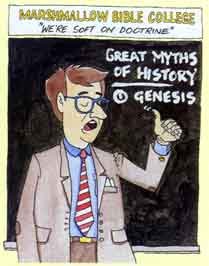 Most well-meaning Christians, indoctrinated to think in terms of interpreting evidence apart from God's Word, focus on looking for independent or 'neutral' outside 'facts' that can 'prove' the Bible true.

However, while evidence is of course important, all evidences are interpreted in the light of one's starting beliefs. For instance, starting with the Bible, we know that death, bloodshed, and disease came into the world after sin — so we realize that fossils could not have formed before the first man existed. Thus, the presupposition of Scripture determines how one interprets geology in regard to fossil-bearing rocks.3

After explaining all of this at a Christian teachers' convention, one teacher came up and said, 'You know, we want to find Noah's Ark, the Ark of the Covenant, and hope the Shroud of Turin really is the shroud Jesus was wrapped in, because we are looking for "proofs" that the Bible is true. However, what you have taught us is that ultimately we can't "prove" anything in relation to the past anyway, and once we accept what the Bible claims for itself, that it is the Word of God, and thus build all of our thinking upon this, then we can consistently interpret the evidences around us and logically defend God's Word. Wow — what a relief!'

Once Christians really understand that we have answers revealed from One who is all-knowing, and that these provide a basis for all of our thinking — it makes a tremendous difference!4

Where was the Garden of Eden?

Many people fall into the trap of trying to locate the biblical Garden of Eden based on today's geography. However, the earth today is vastly different to what it was before the world-wide Flood of Noah's time. The world that existed before Noah's Flood would have been either totally destroyed or buried in or under the vast sedimentary rock layers (rock laid down by water) that are found around the world.
Return to main.

Dinosaurs and man living together?

Genesis chapter 1 records how God made all kinds of creatures during the six 24-hour days of Creation Week. So this must have included dinosaurs and humans. Evolutionary thinking has blinded many into believing that no human ever saw a dinosaur. But people need to be shown the truth of God's words as opposed to the ever-changing theories of men.

'Believing themselves to be wise they became fools …'

Sadly, many academic and theological institutions scoff at the Bible's account of the history of the world. Some teach that the Word of God is at best a collection of myths and parables. Almost invariably, those who deny the historical truth of the Genesis account will also be found to disbelieve the accuracy of other events in the Bible, such as the virgin birth of Christ, the miracles of Jesus, and the resurrection.

The Bible teaches there was no death before Adam, because everything in the original creation was 'very good'. Only after God imposed the death penalty for sin did the world become subject to death and decay. Fossils are the remains of dead things in sediments laid down by water all over the world. The evidence for a global watery catastrophe that killed countless millions of creatures is overwhelming.