Raising Up Generations with the Right Foundation

Yes, it’s alarming! And when I show it in graph form at my public presentations, people see it so clearly. As they say, “A picture is worth a thousand words,” and these graphs emphasize how we need to raise up generations with the right foundation for their worldview.

Let me share with you what I’ve been saying to people in my recent presentations. In a slide, I show how researchers have divided generations into the following groups:

Now I want to show you two graphs, adapted from those found in a paper published in 2010 by the Pew Research Center. The first one is titled “Attendance at Religious Services, by Generation—Percent Saying They Attend Several Times a Week, Every Week or Nearly Every Week”:

The next graph I show is titled “Views of Homosexuality, by Generation—Percent Saying Same-Sex Sexual Relations Are Always Wrong”: 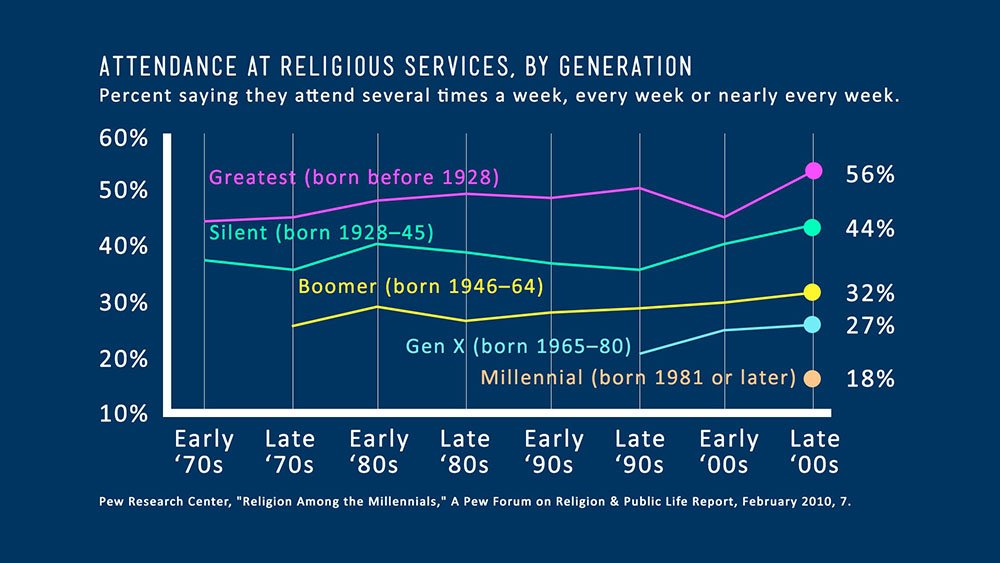 Now consider the latest research (2018) conducted on Generation Z (born 1996–2010). By the way, not a lot has been studied concerning this group because they are harder to research due to their young ages. Here is what pollster George Barna found in the general US population:

“Teens 13–18 years old are twice as likely as adults to say they are atheist ”.1 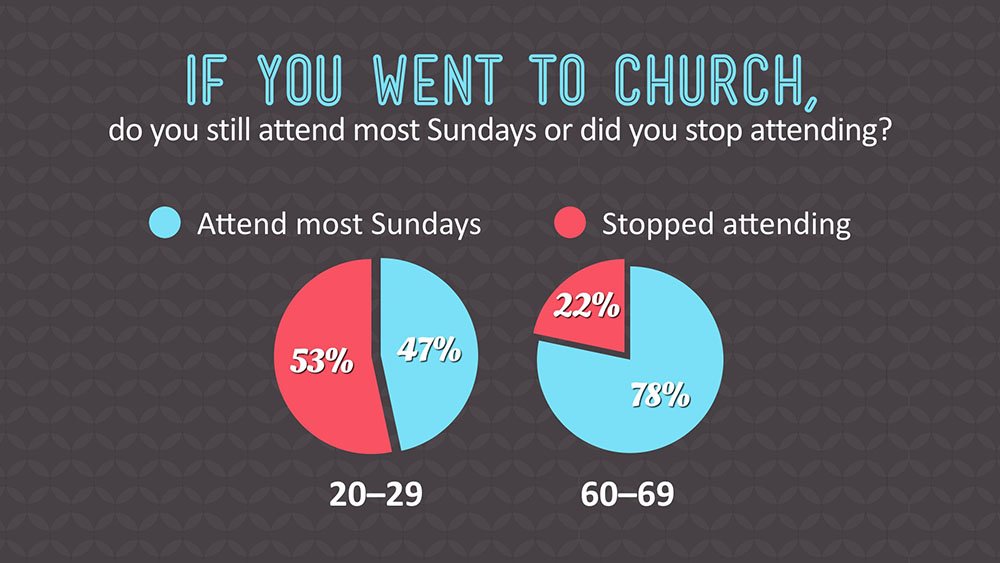 Yes, there’s no doubt that, from a Christian perspective, America is on the brink of catastrophic change! That change has already happened in other Western nations.

But is there any hope? What can we do?

Well, when Christians express hopelessness at what’s happening in the culture, I always challenge them by highlighting what God’s Word teaches us. In the parable of the 10 minas in Luke 19:13, Jesus taught that after entrusting resources to his servants, the nobleman (representing Jesus) said,

This verse is a reminder that God has entrusted resources and talents to each of us. God expects us to do the best we can with what he has entrusted us with to engage in the business of the King (the King of Kings) until he returns. It’s the business of proclaiming the truth of God’s Word and the gospel.

At Answers in Genesis, we’ve always used a considerable number of resources, such as books, curricula, DVDs, and so on, to disseminate information to all ages, including children and teens. Our Vacation Bible School (VBS) program is now in the top three sold in the world and reaches tens of thousands of children each year. Our four-year ABC Bible curriculum teaches all age groups and is used in about 10,000 churches.

It’s also thrilling for me to see so many kids and young people attending AiG conferences and then telling me afterward about their excitement of learning apologetics truths. Their faith is bolstered as they are equipped to be bold in getting out the Christian message to their peers and others.

And that brings me to an exciting part of what we’re doing for children and young people, especially at the Creation Museum—and, soon even more so, at the Ark Encounter, when our large auditorium and workshop rooms are completed.

We have a group of very talented staff members who conduct workshops for children and teens on a variety of topics. These workshops are often fully booked. We have also introduced special day camps for the summer, and these are already very popular.

We’re finding a hunger like we haven’t seen before in the younger generations! So many more young people want to learn how to defend the Christian faith and have a truly Christian worldview. They are hungry to be trained in creation apologetics so they can be effective witnesses for the Lord Jesus.

AiG continues to expand our offerings in this area. Right now, we have an immediate need to buy special equipment due to the high demand for our science workshops. We do charge a nominal fee for most workshops to cover the items children deplete. However, the permanent lab equipment we can use year after year is still unfunded.

This lab equipment will enable us to add even more youth programs and teach more of the coming generations from a creationist/Christian worldview perspective.

Your support and prayer will allow us to offer these important programs for children and teens at the Creation Museum—and eventually at the Ark Encounter when the new Answers Center and its lower-level workshop rooms are fully funded and finished.

Let’s raise up generations who will be the light and salt needed in our increasingly secularized culture! That’s such an important legacy for us to build for future ministry impact, as our younger generations continue the effort to engage in “business until he comes.”