Better known as stick (or leaf) insects, the phasmids are the undisputed masters of camouflage in the living world. 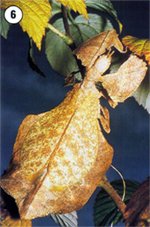 Even this close up, the two straightened, part-hollowed front legs of Lonchodes strumosus (Borneo) look just like a decaying twig.

Better known as stick (or leaf) insects, the phasmids are the undisputed masters of camouflage in the living world. They come in a bewildering array of forms, which virtually all mimic some part or another of various plants. Can that really be an insect? It looks just like a dry stem of grass (photos 1-3), or a partially gnawed or dead leaf (4-7) [photo 5 and 7 are available in Creation magazine], or a thorny twig (8), or … But there—it starts to move—and sure enough, suddenly we see six long legs as it ambles off. Or two previously unnoticed wings unfold, and it flies away as we watch in fascination.

Could such wonders have just evolved? Look at the different types here, all camouflaged to perfection. Sipyloidea sipylus (1-3) climbs onto a dry grass stem, stretches one pair of legs out straight in front, between which its long feelers suddenly disappear. The two other pairs of legs go to the rear, pressed tightly against its body. There is now virtually nothing to see of its wings, either. All that is left to see has the yellow-grey colour of dead grass—even down to copying the dark little flecks of fungus on the grass!

According to evolutionary belief, phasmids are the result of millions of chance mutations, filtered by selection. It is taught that all of them descended from a common “phasmid ancestor.” But if they came about by such a continual, gradual process of “development” and “adaptation,” how is it that we only ever see the end products in all their exquisite perfection? How is it then that they are so different, one mimicking exactly the common crooked twigs lying on forest floors (9,10), the other a diseased, damaged leaf, another a rotting stem (11), yet all with the same habit of camouflage, to the same degree of perfection? What is the probability, even given all the selection in the world, of all the right “genetic accidents” occurring at the right time and in the right sequence, in all of these separate lines?

Along with so much else in the living world, the phasmids indicate providential, intelligent design. To create something as complex as one of these brilliantly programmed mimics at the beginning of time involves a Creator capable of working miracles. Which is exactly what Genesis—and all of the rest of the Bible—teaches, consistent with the evidence before our eyes.

Sipyloidea sipylus (Australia, Madagascar, E. Africa, Indonesia) is in all three of these photos—see the unfolded wings in photo 2.