Armies normally require a general and vast support staff to organize and move in unison. Not so for the periodical cicadas of North America, which emerge in swarms every few years.

They march out of the ground a mighty throng. In multitudes of more than a million and a half per acre, they reach plague-like proportions. Among the most familiar of all insects in eastern North America, they are the periodical cicadas.

Insects grab our attention for lots of reasons, both good and bad. Honeybees delight us with sweetness; butterflies entrance us with beauty; wasps frighten us with pain; lightning bugs glow in the dark; and praying mantises are just big, cool-looking predators.

What about cicadas? Well, they’re biggish bugs, but they don’t sting or glow or devastate crops or produce honey, and they’re certainly not rare. What’s fascinating about periodical cicadas is their sheer numbers and the mysterious timing of their emergence from hiding.

Young periodical cicadas, or nymphs, spend years not more than two feet under our two feet, down among the roots of trees in our shady yards and parks. What are they doing down there? God designed all cicadas with straw-like mouthparts. The underground nymphs seek out tree roots, poke in their proboscises, and suck up the sugary sap. After five instars (periods between molts), a massive army of teenage cicadas crawl out of their tidy burrows right on schedule.

The Invasion of the Nymphs 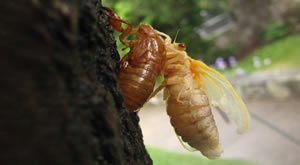 When a cicada nymph molts, the crispy cuticle of its underworld existence splits along a straight seam down the middle of its back, and a very different, white-to-yellowish adult bulges out. The soft, vulnerable adults instinctively hide in the foliage for about six days until their cuticle hardens and changes to a handsome pattern of black and orange.

Periodical cicadas have a unique life cycle. Each brood of full-grown nymphs synchronizes a mass emergence every 13 or 17 years (depending on the species) to become adults. Zombie-like, they shamble along the ground, seeking a tree trunk, fence post, or anything climbable.

After a nymph clambers up a few inches or several feet, it undergoes an amazing transfiguration called molting. First it halts, and then the crispy cuticle of its underworld existence splits along a straight seam down the middle of its back, and a very different, white-to-yellowish adult bulges out like the Incredible Hulk ripping out of Bruce Banner’s clothes.

Molting (shedding) takes about an hour, and then the cicada’s four shriveled wings inflate to full size. The soft, vulnerable adults instinctively hide in the foliage for about six days until their cuticle hardens and changes to a handsome pattern of black and orange.

After spending their entire youth underground, the adults have less than a month to live. No time to lose! They instinctively obey God’s first command: Be fruitful and multiply. The male is the songster. His high-pitched buzzing may not please human ears, but it’s ideal for attracting females of the correct species.

Drum-like membranes called tymbals on both sides of the male’s abdomen vibrate to produce his courtship song. Large air spaces in his abdomen, like a guitar’s body, serve as resonating chambers that amplify the sound. Males “sing” in groups and often move from tree to tree between serenading sessions until they’ve found a mate. These choruses can reach 100 decibels—about as loud as a chainsaw. The females quietly signal receptivity by regular flicks of their wings.

Be Fruitful and Multiply

After mating, the female crawls along a twig, cuts a V-shaped slit with her egg-producing organ (ovipositor), and lays a couple dozen eggs. She keeps making slits until she exhausts her supply, about 400 to 600 eggs. A month and a half later the eggs hatch, and the tiny nymphs crawl out of their slits, drop to the ground, and dig down to start their secretive lives.

Scientists have wondered why these huge broods grow up, emerge, make a racket, mate, lay eggs, and die all in unison. Evolutionists think a complicated series of variations produced these synchronous life cycles to adapt to long periods of cold during the Ice Age and to overwhelm predators. There’s no doubt it’s a successful strategy; but what could direct the cicadas to come up with this plan in the first place?

We don’t know cicadas’ purpose in the world before the Fall—perhaps it was simply to sing their Creator’s praise—but today they benefit plants and animals alike. The tunnels the nymphs dig aerate the soil so plants can more easily obtain nutrients, and the females’ egg-laying naturally prunes large trees. In our fallen world, cicadas help plants even in death by enriching the soil with nitrogen, and they play an undeniably beneficial role as a food source. Several kinds of predators gorge on cicadas at the “all you can eat cicada buffet,” yet their numbers, like the sand of the seashore, are so vast that the predators can’t put a dent in them.

Ironically, the cicadas’ overwhelming numbers benefit predator and prey alike. It certainly wasn’t unguided evolution that generated these amazing creatures or their perfectly timed life cycles; it was God’s wisdom in providing for His creation.

Dr. Gordon Wilson, Senior Fellow of Natural History at New Saint Andrews College, earned his PhD from George Mason University in environmental science and public policy. He holds a master of science degree in entomology from the University of Idaho.
Next Article Cloudy with a Chance of Awesome