These fascinating creatures, known to insect specialists as Strepsiptera (from the Greek meaning ‘twisted wing’), are virtually unknown to the public.

However, with about 400 known species, these insects are quite widespread. But the biology of very few has been studied in detail.

Strepsiptera are parasites of other insects—such as bugs, flies, cockroaches, wasps, bees, grasshoppers, and more. Adult males, rarely more than four millimetres long, are free-living and winged. Adult females, on the other hand, are quite peculiar in that they are grub-like (see Figure 1), and generally never leave their host. Host insects are normally rendered sterile by their uninvited ‘guests.’

The only visible parts of the parasite are the head and thorax, which poke out between two abdominal segments of the host—see the photo of the wasp on this page, with the arrow showing the protruding part of the parasite (photo available in Creation magazine). 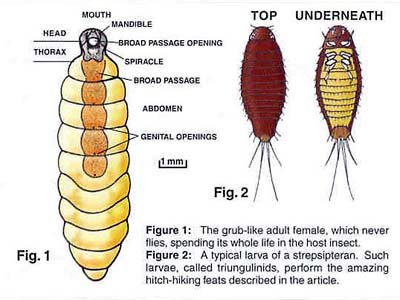 These creatures have a fascinating life cycle. Typically, the winged and free-living male insect starts seeking out a female as soon as he emerges from his pupa and leaves his host. Remember, the females are not free-living, but remain forever imprisoned, cemented into their obliging host. Just how the male is able to find an insect which is playing host to a female strepsipteran, (which has to be of the same species) is a question which no one so far has been able to answer. Perhaps the complex and bizarre-looking antenna of the male plays some part in this.

Cutting a long story short, the mated female finally ‘gives birth’ to her brood—usually about one thousand infants! This she does while still attached to her host, as she always is. The larvae make their way to the outside world by means of a special canal that opens at the front end of the mother. This in itself is remarkable. In all other insects, the egg-laying or birth canal is located at the back end of the female. How many disasters would have occurred while such a reversal took place, if evolution ‘created’ this feature?

These larvae are a story in themselves. Shaped vaguely like a woodlouse, these triungulinids, as they are called, are very active little fellows. They are a form of larva almost unique to the Strepsiptera.1 Figure 2 gives you an idea of what one type of these looks like.

Well, what happens next? The problem that confronts the newly-hatched triungulinids is how to find a new host.

How do they do this? Well, as soon as they can, these little ‘lice’ alight from the insect host on which they began their existence. This presumably takes place when the host makes a pit-stop on a flower. Having disembarked, they now loiter on the flower until it is visited by another insect. God has programmed their microscopic computer brain so they can literally jump aboard any flying insect that alights on the flower.

Although not much bigger than a speck of dust, these larvae can spring up to three centimetres (more than one inch) in one leap—a mind-boggling ability. Most of these tiny larvae perish soon after hitching a ride simply because they have caught the wrong plane. But enough of them hop on to the correct host to keep the species flourishing.

A female paper wasp which has been 'stylopised'. This is the technical term for when an insect has been infested with a strepsipterous parasite (see main text). Photo by Dr. Joachim Scheven.

This is not the end of the story, but almost just the beginning. The triungulinid is not really interested in the animal it has boarded, even if it is the correct kind. It is using this insect as nothing more than an airborne taxi. It is hoping that its pilot will take it to the pilot’s nest, if it has one. If it does—and the mathematical chances of this happening are very small, which is why so many are produced—it disembarks in the nest. Here it immediately, instinctively, seeks out any larvae (‘grubs’) that its taxi driver has been nurturing.

In order to keep the life cycle going, it has to get inside the grub. How does it do this? One might think it would simply crawl into its mouth, or one of its breathing holes. But no. It enters by literally dissolving a hole in the grub’s skin. It exudes large quantities of a special fluid from its mouth, so that it soon becomes completely immersed in it.

This substance hardens on the outside in three to four minutes, while at the same time dissolving a hole in the skin of the host grub. The triungulinid is quite active while immersed in this fluid, contracting and expanding its body in an effort to break through the softened skin of its future host. Eventually it succeeds.

[Editor’s note: Although this is a remarkable design feature, would this have existed in a perfect world before the Fall? We can say with confidence that there was no pre-Fall death or bloodshed among self-conscious animals (those which have what the Bible calls a nephesh [Hebrew] or life principle). Plants do not have a nephesh, although biologically alive (Gen. 1:30). Vertebrates like rabbits, lions, and so on clearly do. Do creatures like insects, that function only by instinct, not conscious planning, also have nephesh life? Possibly not. There may be insufficient information to determine from Scripture where to make the distinction for certain. Note that the triungulinid’s host does not die, and seems not to be conscious of any pain or suffering in this process as far as can be determined. For more discussion on this intriguing question, see the chapter 6: ‘How did Bad Things Come About?’ in The Answers Book.]

Once inside, another remarkable thing occurs. Here the triungulinid casts off its outer skin. What emerges from the cast-off skin is not an active little triungulinid, but a legless maggot-like creature. What a wonder! Such complete transformation (as when, somewhat in the reverse direction, a caterpillar becomes a butterfly) is called metamorphosis. This ‘maggot’ lives in the body cavity of the host grub (of a bee, beetle, etc.), absorbing food from its benefactor’s blood. Usually it passes the entire winter in this secure house.

When spring comes, the miracle of life continues. Generally, both the host insect and its free-loading tenant metamorphose simultaneously, the one inside the other. (Obviously, the strepsipteran doesn’t kill its host.) When the host insect emerges from its winter retreat, its little companion can be observed jutting out from between the abdominal plates of its landlord.2 And so the life cycle of this ingenious example of God’s handiwork continues.

It’s also worth noting that strepsipterans have a unique eye design which is closer to that of a trilobite’s than to any other insect’s. This is a difficulty for evolutionists since they believe that all insects share a common ancestor. The strepsipteran’s has a compound eye with very large facets that sample larger chunks of the visual field. 75% of the insect’s brain is devoted to processing this extra information. The images produced are inverted, but the insects also have chiasmata, or X-shaped nerve crossings, that turn the image right-way-up.

Believe it or not! 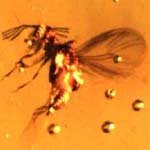 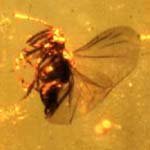 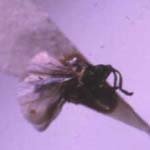 The photos show three males of the Strepsiptera (twisted-wing) insects. Only the males have wings and fly (see text). Photo ‘A’ has the scientific name Bohartilla joachimscheveni, after the well-known creationist scientist Dr Joachim Scheven who first discovered it in amber,3 and who kindly supplied all photos for this article.

It is preserved in Dominican amber (fossilized tree resin), which evolutionists claim is 35 million years old. If that were true, imagine how many millions of generations of this Bohartilla would have given mutations the opportunity to change this type drastically. However, it is fundamentally identical to the living Bohartilla from Central America. Photo ‘B’ of the genus Stichotrema, is also from Dominican amber, and again is identical to the living strepsipteran Stichotrema in photo ‘C.’

Fossils never show any significant ‘evolution’—rather, they show that fossil creatures have no remaining living counterparts (extinction), or that they have stayed essentially the same (stasis), or have degenerated (lost information).