Butterflies on the Battlefield

What if badges could change color in an explosion, giving doctors vital information about the severity of the shock?

Loud yelling. Shots firing. Explosions fill the air. Your ears overload with the sounds of battle, which prevent you from hearing the warning. Suddenly a nearby bomb blasts you off your feet. The wind is knocked out of your lungs, but you’re not bleeding. So you shake it off and carry on fighting.

You just became the next casualty.

Blast-induced traumatic brain injury, or TBI, is the “signature injury” of the recent wars in Iraq and Afghanistan.1 This injury occurs when an external force, such as an explosion, damages the brain. An estimated 20% of U.S. soldiers serving in the Middle East will suffer brain trauma as a result of IEDs (Improvised Explosive Devices). Improved body armor has saved lives from projectiles, but the delayed dangers of brain trauma persist.

Diagnosing and treating brain trauma is particularly tricky, since the extent of the injury can’t be directly detected, and the severity depends on the strength of the blast, which doctors can’t observe. Furthermore, symptoms of serious damage don’t always appear right away. Slowly progressing brain damage can go undetected and undiagnosed, sometimes for years. To make diagnosis even more challenging, symptoms can mimic those of Post-Traumatic Stress Disorder.

Researchers at the Perelman School of Medicine at the University of Pennsylvania and the same university’s School of Engineering and Applied Science are working to develop a type of “blast badge” to affix on the uniforms and helmets of soldiers in combat. The invention was inspired by the delicate beauty of the butterfly. 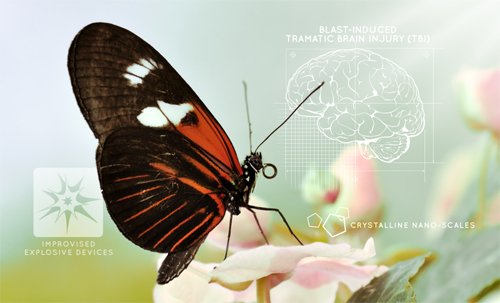 It may surprise you to learn that the bright, vivid colors of a butterfly do not result only from pigment. Pigment, such as in the colors of our clothes, absorbs and reflects specific colors. But butterflies’ wings display color in another way. Iridescence is caused by the complex reflections of light. If you hold a butterfly, you’ll notice how its wings seem to be covered in dust. The shape and placement of these tiny, dust-like scales determine how light reflects off of them. Different shades and colors appear, depending on how far apart the scales are placed.

Borrowing from the design of butterfly wings, scientists are working to produce blast badges that identify the strength of the shockwaves during an explosion.

But how does this apply to soldiers? Borrowing from the design of the butterfly, scientists are working to produce blast badges using a color-changing technology made of crystalline nano-scales (small chips that look like butterfly scales). During an explosion, the shockwaves alter the nano-scales’ structure relative to the intensity of the blast. The change in structure changes how the scales reflect light, which in turn causes the badge to change color. Essentially, the stronger the blast, the greater the color change. The resulting color tells the soldier and doctors the severity of the blast—information essential to receiving the proper medical care as quickly as possible.

Although these blast badges are still being developed, the technology is very promising. After all, it is based on a design created by God, the Creator and Sustainer of the universe. We can give our Creator thanks not only for the beauty of a butterfly but also for inspiring new technologies that will ultimately protect lives.

Butterfly wings display colors by the way they reflect light. A slight change in the angle of their scales changes the color. If a frontline soldier wore a badge with these properties, any explosion would change the placement of the scales, thus changing the color of the badge. Physicians would know right away how severe the explosion was, even if the soldier did not remember.

Melinda Christian, a staff member of Answers in Genesis from 2000 to 2008, graduated from Calvary Bible College in Kansas City, Missouri. Melinda is an avid writer and has also edited a number of AiG publications.
Previous Article A Sticky Solution Next Article Battle over the Nephilim