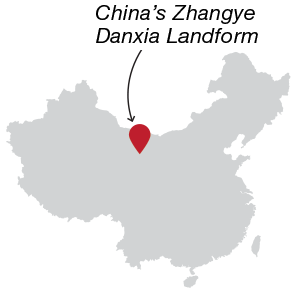 Like every other rainbow, China’s Rainbow Mountain was formed by water. Unlike the rainbows God paints in the sky, however, this one is sculpted in stone, and it remains visible even after the clouds pass.

Tourists from around the world visit Gansu Province to enjoy this visual feast. The striking colors come from fine layers of sediments rich in different minerals laid down during Noah’s Flood. As the Flood ended, earth movements continued, tilting these layers upward. Normal processes of rain and erosion exposed the minerals to oxygen in the air. This oxidation changed and colored the minerals, painting a rainbow in stone.

Minerals containing iron colored large areas of sandstone red. Other sections of bright yellow sand and clay turned orange. Glauconite sandstone, or “green sand” originally found on the bottom of the sea, turned swaths of the mountain gray-green or blue.

Erosion carved out valleys, caves, and cliffs, putting the finishing touches to the masterpiece. The rainbow exposed in the Zhangye Danxia Landform is an enduring reminder of God’s judgment and mercy in the Flood, just like the rainbow reminded Noah about God’s promise never to flood the earth again.