Yellowstone is probably the best area in the world to see how powerful volcanic eruptions and violent earth movements reshaped the earth´s surface at the end of Noah´s Flood and in the years following.

“Look at those pretty colors in the pool, Daddy. But what´s that smoke? Is it hot?”

“Yes, honey. It´s very hot. In fact, springs like this are hot because super-hot, molten rocks, called magma, rose from deep in the earth during Noah´s Flood—just a few thousand years ago. The heat hasn´t had time to cool off.”

Each year, millions of tourists flock to Yellowstone National Park to witness the world´s largest display of geysers, hot springs, and mud pots. Many also visit the nearby Grand Tetons to marvel at the mountains´ majesty. But these places have much more to offer than rare sights. This is probably the best area in the world to see how powerful volcanic eruptions and violent earth movements reshaped the earth´s surface at the end of Noah´s Flood and in the years following.

The fact that molten rock remains hot near the earth´s surface is evidence that Yellowstone´s volcanic activity was recent—fewer than 4,500 years ago, according to the Bible´s timescale. So every one of the park´s 100,000 geysers, hot springs, and mud pots is a testimony to the recent Flood.

Bring along the Road Guide to Yellowstone National Park and Adjacent Areas from a Creationist Perspective, published by the Creation Research Society.

As the earth settled back into place after the Flood, some areas rose, while others sank. At the Tetons, the mountains rose several miles (around 30,000 feet relative to the layers beneath the Jackson Hole area, which fell). If you look along the western shore of Jackson Lake, you can see the Teton Fault, which marks the boundary between where the mountains rose and the nearby land fell. The evidence indicates that most of the world’s mountain ranges rose very recently because their dazzling heights and ruggedness have not had time to erode away. Even many secular geologists admit this. 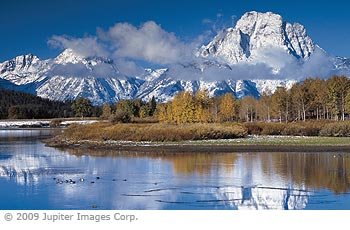 Don’t miss Yellowstone’s Old Faithful, the most consistent geyser to erupt. A chamber of hot magma still lies under Yellowstone, heating the water. When the pressure gets high enough, the water blasts through the porous rock. The fact that magma is still hot enough to drive the geysers indicates that the magma moved to this chamber very recently (at the end of the Flood, not millions of years ago). 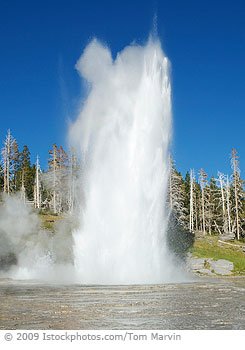 At the northern part of the park, you’ll find the famous petrified forests of Specimen Ridge. Innumerable stumps are scattered around, in over forty layers. The park signs tell you that these stumps represent many different forests that were buried successively over millions of years. But a recent worldwide Flood provides a better explanation. Notice that the stumps are stripped bare, without any signs of roots or soil. If the Flood stripped the earth’s forests and then the trees floated on the ocean and jostled about, rubbing together before sinking, it could more easily cause many layers of stumps. Scientists observed something similar to this happening at Spirit Lake after Mount St. Helens erupted in 1980. 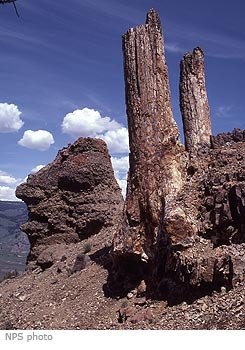 What makes the dazzling colors at the park’s largest hot spring? Brightly colored microbes thrive in the extreme heat. While secular scientists believe life evolved in harsh environments like this billions of years ago, they are discovering that microbes require a variety of complex biological systems—unlike anything found in plants or animals—to live in such extreme environments. 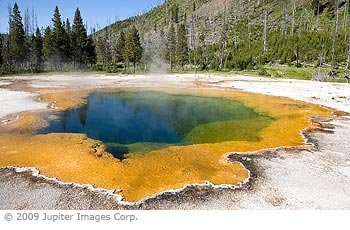