In addition to outdoor adventure and beauty, this park is a great place to learn about how mountains were formed from rock layers at the end of the global Flood.

Ah, the fresh clean air of the Rockies. Snowcapped peaks, verdant valleys, pine forests, and mountain-fed streams. There is much beauty and grandeur to explore in this mountain range that stretches from Canada through central New Mexico. A trip to Rocky Mountain National Park has much to offer in the way of outdoor adventure, but it is also a great destination for learning about how mountains were formed from rock layers at the end of the global Flood.

Whether you are driving through the park´s many winding roads like the popular Trail Ridge Road (known for being the highest continuous paved road in the nation) or hiking the 359 miles (109 m) of trails, you can use this time to talk to your family about how these mountain ranges were formed. Unlike what most park literature and public school textbooks claim, mountains didn´t form over millions of years of plate movement, but rather as a result of the earth´s crust shifting during the catastrophic Flood of Noah´s day, which forced mountains to rise to amazing heights.

Like other mountain ranges throughout the world, the Rocky Mountains contains rock layers that were deposited during the global Flood, which you find thousands of feet above sea level. You may find evidence of this as you hike through the many trails and discover some fossils embedded in these rock layers. Talk to your family about the many fossils of sea creatures that have been found in rock layers thousands of feet above sea level.

Just as Psalm 104:8 describes the mountains being raised up toward the end of the Flood and the waters draining down the valleys and the new land surfaces, this is exactly what we find: mountains that only recently rose to their present spectacular heights.

Near Estes Park in the Rocky Mountain National Park, you will find the highest mountain in the National Park—Longs Peak at 14,259 feet (4346 m). The summit of this magnificent peak is flat, nearly the size of a football field. Thousands of people hike or climb to the summit every summer. However, this high peak and flat summit can be seen from almost anywhere in the park. Point out to your family how the rock layers from the Flood can be found even on top of mountains as high as Longs Peak. 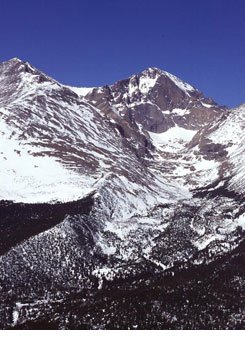