The centerpiece of the New England Aquarium is its four-story tank, which simulates a coral reef. Here you´ll see over 600 different creatures, each one having its own special design to live underwater.

“Grandma, how do sharks sleep?”

“That´s a good question, dear. This sign says that sharks don´t sleep like we do. Parts of their brain shut off while swimming. And look at those parrot fish. They actually make a sleeping bag out of goo from their mouth. It looks like God wanted all creatures to rest—even fish that swim in the sea.”

Prepare for a nonstop barrage of questions, as children wind their way up the long ramp that encircles the central tank of the New England Aquarium.

The centerpiece of this world-class aquarium is its four-story tank, which simulates a coral reef. Here you´ll see over 600 different creatures, from tiger sharks to stingrays. Every one of them has its own special designs to live underwater.

Shark skin, for example, is covered with small bumps, called dermal denticles, that improve the shark´s speed through the water. No wonder Speedo swimsuits mimic the design of shark skin!

Other exhibits augment this amazing menagerie. Visit mysterious jellyfish, adorable Atlantic seals, African penguins, and a giant 20-foot octopus. And while you´re planning your trip to Boston, don´t forget to reserve a seat on the aquarium´s whale-watching boat. They guarantee that you´ll see some of these huge mammals!

Every one of these creatures has its own surprising story to tell, yet all sing praise to the same Maker. “Praise the Lord from the earth, you great sea creatures and all the depths” (Psalm 148:7).

The Mystery of Jellyfish

With their delicate, transparent bodies, these bloodless, brainless creatures are wonders of the sea. Did you know that each species has its own unique dance, as it pulls in its prey? Did you know that upside-down jellies are designed to live in partnership with algae? The jellies provide shelter, while the algae provide food. In fact, the jellies turn upside-down to help the algae get more exposure to the sun. 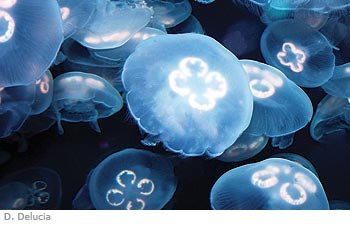 How many opportunities do you get to see some of the largest creatures ever to inhabit the earth? You’re guaranteed to see whales on the New England Aquarium’s whale watch. (Morning trips are usually best.) Their catamaran speeds you to the whales’ feeding grounds, just 30 miles off the coast.

Some truly amazing designs are required for mammals with lungs to survive in the ocean—like blow holes on the top of their head. Learn more, and be amazed by the Creator! (Be sure to take antiemetics to avoid sea sickness, and binoculars are a must!) 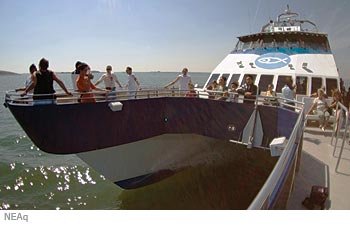 Sharks can swim so fast that they’ve been called the cheetahs of the sea. Their streamlined shape, skeleton design, and powerful muscles enable them to deliver explosive strikes. Every detail of the shark—from the arrangement of its individual scales to its tail flap that reduces drag—testifies to the shark’s incredible engineering for speed under water. 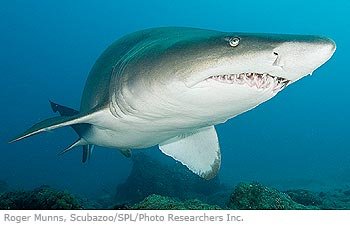