With its approximately 80,000 animals, including whale sharks, this aquarium is a fascinating place to learn about God´s underwater creation.

As you step up to the two-foot thick acrylic window, you see a long shape moving easily among thousands of small fish. For a moment, you are distracted by a stingray gliding past, and then by a hammerhead shark directly overhead. Soon, your attention returns to the long shape. It is a whale shark, the largest fish in the world, and he is swimming toward you.

The Georgia Aquarium is a fascinating place to learn about God´s underwater creation. With its approximately 80,000 animals, representing 500 species, it boasts more aquatic life than any other aquarium in the world. One exhibit explores saltwater creatures, including whale sharks, by taking visitors through a 100-foot (30.5 m) tunnel which allows you to see up close a habitat containing more than six million gallons of saltwater. Other exhibits explore Georgia´s own coastline, cold ocean waters, freshwater environments, and even a living coral reef. In the 4D theater, visitors travel underwater with Deepo, the museum´s mascot, and enjoy many surprising special effects while learning about the problems of pollution.

A Whale of a Shark

The whale shark is actually not a whale but a fish. And it's the biggest one at that. Besides two Japanese aquariums, the Georgia Aquarium is the only North American aquarium that houses these unique creatures. Despite its great size, this giant is not dangerous to humans. Its 4-foot-wide (1.2 m) mouth is located at the front of their heads instead of underneath their snouts like most shark species. Surprisingly, the largest shark in the ocean eats some of the smallest prey—feeding mostly on plankton. Like other sharks, the design features of the whale shark are well-suited for their environment and diet. 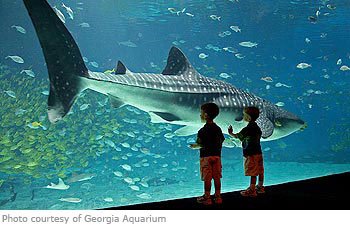 The Georgia Aquarium contains one of the largest living reef exhibits of any aquarium in the world. Few people ever get an opportunity to snorkel at a reef, but at an aquarium, the entire family can be mesmerized by the dazzling color of a reef and its diverse inhabitants. The reef is a place to discuss how God designed creatures that could live together in a rich community of life. This aquarium depicts life in a tropical Pacific coral reef. 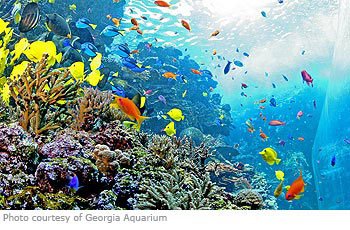