The “Hart” of the Country

David and Doreen Hart have hit the tracks of the remote Australian Outback to spread the message of the Creator/Redeemer.

David and Doreen Hart’s idea of retirement is not a bungalow on a sandy Queensland beach. No, after retiring from a career in financial planning services, this couple have hit the tracks of the remote Australian Outback to spread the message of the Creator/Redeemer. 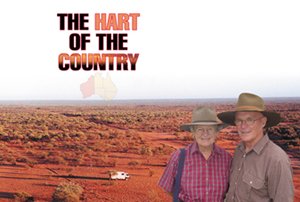 Isolated stations dot the wide expanse of the arid Outback, where the average sheep station is nearly 200,000 hectares (500,000 acres), and cattle stations reach three times that size. Children who grow up on the stations are taught by radio (and mother) on the School of the Air, before attending boarding school. Few families ever go to church or receive any Bible-based religious education.

David and Doreen serve with the Presbyterian Inland Mission1 (PIM), founded in 1912 by John Flynn, who is better known for establishing the Royal Flying Doctor Service. “John was essentially a minister of the Gospel, who felt the call to take God’s Word to people of the Outback,” David explains, “but he also had the vision of establishing teams of patrol padres [travelling parsons] who would call on all the sheep and cattle stations in Outback Australia. That work is continuing today.”

A Parish Double the Size of the UK

The Harts visit 270 sheep and cattle stations, endeavouring to call on them twice a year as they seek to bring a knowledge of God to these people of the Outback. To reach their goal, they must travel incredible distances. “Doreen and I have an area in Western Australia of approximately 500,000 square km [200,000 sq. miles],” David says. For comparison, the United Kingdom of Great Britain and Northern Ireland is only about half as big all told.

“The people of the Outback are no different to the people of the city. There is no knowledge of God, nor any acknowledgment of God,” David observes. “They have been brainwashed, like everybody else, to believe that we evolved from a slurry, millions of years ago. So we see our ministry as endeavouring to bring that knowledge of God which our Lord prayed about in John 17:3, ‘Now this is eternal life, that they may know you, the only true God, and Jesus Christ whom you have sent.’”

How the Harts Got Started

Images from the Outback

The Harts’ 4WD camper bogged in mud after rains.

Cattle yards against the backdrop of outback mountains.

Doreen spends time with children at a remote station.

Children saying their “goodbyes” at the station gate.

Looking down on a typical outback cattle station.

Stopping for a drink at a windmill tank in the “middle of nowhere.”

Wildflowers bloom after the rains.

After retiring early in 1997, David and Doreen began travelling around and fell in love with the Outback. In the process, they met several patrol padres. One of these became a close friend and invited David to accompany him on a week’s patrol in 1999. “That was a great experience,” recalls David. “I enjoyed it and learnt so much of what patrol padres do in seeking to bring God’s Word to people of the Outback. But I thought that was the beginning and end of it.”

Then this padre friend called them to say he had been asked to pastor a church in South Australia. He suggested that the Harts take over his patrol. “We thought he was joking. He wasn’t! So we eventually found ourselves on board.”

They are now in the middle of a four-year commitment. “If the Lord gives us the health and energy, who knows how long we will stay?” says David. “We don’t have any formal retirement ages in this work.”

It is a tradition in the Outback, when patrol padres drop in, to make them feel welcome. Yet, even after calling on a station several times, it is not always possible to share God’s Word. David says they are building relationships, building trust … and leaving literature behind.

“At least we get into the homesteads, we sit around, have a cup of tea, even though most are only interested in talking about the weather or the price of wool, or other things of general interest. But we have made it a policy to leave good literature every time we call. When the opportunity is there to talk about the things of God, we have found that people are more open to talking about creation/evolution than any other spiritual subject.”

The Harts see their task as presenting God’s Word, either written or oral, and materials and information to break down the barriers to the Word. They believe that, as they are faithful, in time God will bring some of those whom they have contacted to Himself. “That gives us great confidence in calling on stations, waiting, and—where possible—creating the opportunities to share the Gospel,” David says.

On their first visit to each station, the Harts left a copy of Ultimate Questions by John Blanchard, and they gave away another Biblical booklet on their second visit. On their third visit, because of what they had already observed about the potential of this topic, they decided to give away AIG’s booklet Answers to the 4 Big Questions. “We know this is going to give us a wonderful opening in the future if we can get them reading this sort of material.”

What inspired the Harts” vision of creation evangelism? AIG’s book on “Creation Evangelism” (now titled Why Won’t They Listen?) was “most helpful,” showing them the need to go back to Creation, the Fall and Noah’s Flood, which are woven together with the promise of Christ the Redeemer. “Particularly since September 11, we have found that one can talk to people and draw the distinction between where an evolutionist comes from and where the Bible comes from, and it helps a great deal,” David says.

Bumping Around the Outback

Most PIM padres are supplied with a Land Cruiser and a camper trailer, which they set up every night. The trailers don’t even have a shower or a toilet, and the padres generally go out on patrol for three weeks and then stay home for ten days. But the Harts are able to patrol continuously for nine months each year, because God has blessed them with a practical self-contained four-wheel-drive motor home. This vehicle (named “Clyde” after the Clydesdale work horse) was specially built for off-road travel. Solar panels in this desert environment supply all their need for power. Three water tanks together hold 220 litres (58 US gal), but must be replenished each week at the stations and towns scattered across the Outback. Diesel fuel is readily available.

“But how do you wash clothes when you’re travelling in the Outback?” people often ask. Good question. Every few kilometres they find a water tank beside a windmill where the sheep and cattle drink. “We half fill a bucket with water, add the detergent, the clothes, clamp on the lid and place the bucket in the shower recess”, says Doreen. “As we bump and jog our way over these rough outback tracks, it agitates for two or three hours and the clothes are well and truly washed.” Later they rinse the clothes and hang them out overnight, hoping no hungry feral goats are roaming around.

The Harts’ Next “Go Around”

On their next visit around the stations, the Harts are planning to give out past editions of Creation magazine, as well as to be there for any discussions that the 4 Big Questions booklet may have triggered.

In addition to sharing the Gospel with adults, the Harts are greatly burdened for the children. Already they have had several opportunities to give religious instruction. During their recent tour of duty, for example, they used a teacher’s copy of AIG’s A is for Adam as the basis for half an hour of discussion, and then they let children colour in the back pages of the book. In the future, they plan to give away student copies to the young people.

These dedicated padres, David and Doreen Hart, have a wonderful vision for spreading the Gospel to the lonely spots of Western Australia. It is humbling to see how the Lord has brought together such an amazing assortment of like-minded believers—from all walks of life—to proclaim the hope of the Gospel, beginning squarely with the Genesis account of God’s Creation and Adam’s Fall.