Dr. Raymond V. Damadian would probably be too humble to accept the title ‘super-scientist’ but the people whose lives have been saved by the MRI scanning technology he developed might say otherwise.

Hailed as one of the greatest diagnostic breakthroughs ever, this technique, using advanced principles of physics and computing, lets doctors visualize many organs and their diseased parts without the risks of exploratory surgery or the radiation associated with traditional scanning methods.

Dr. Damadian’s invention has earned him several top awards, including the United States’ National Medal of Technology, the Lincoln-Edison Medal, and induction into the National Inventors Hall of Fame alongside Thomas Edison, Alexander Graham Bell and the Wright brothers.

A Bible-believing Christian, this great inventor is convinced of the scientific truth of Genesis creation and its foundational importance to church and society. 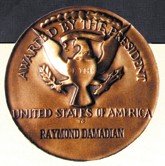 Despite his fame, however, life has had its difficulties for this revolutionizer of medicine.

First, there were the years of hard work against much opposition and many doubters. His interest in the idea of MRI began when he was a young professor engaged in active scientific research at the State University of New York. Skeptics sarcastically informed him that to use the then-young technique of nuclear magnetic resonance (see box) in a medical imaging machine would mean rotating the patient at 10,000 revolutions per minute!

He said that ‘theoretical physicists claimed to have done calculations demonstrating that my idea was beyond what the theory of physics would allow.’ This worried and confounded would-be financial backers, but Dr. Damadian took it as a challenge for himself as an ‘experimentalist’ to ‘do something the theorists say can‘t be done.’ 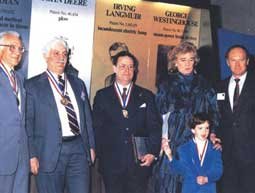 The 1989 National Inventors’ Hall of Fame inductees. Dr. Damadian is second on the left.

Finally, he was granted a US patent for a functioning MRI machine. Today, MRI is a world-famous, multi-billion-dollar technology with more than 4,000 of these complex machines installed around the world. Dr. Damadian told Creation magazine of how his company, formed to exploit the legal patent with great potential benefits to many Americans, experienced something extraordinary. Several huge overseas and multinational firms began manufacturing MRI scanners in spite of his patent. Dr. Damadian‘s small company was forced to go to court—a jury trial in 1982 found the patent to be valid and in-fringed. He had won!

The happiness, however, was short-lived. For some reason the judge, six weeks after the trial, ‘voided the jury’s verdict and substituted his own.’ Dr. Damadian had lost. He says that after his company had spent $2.2 million in legal fees he learned the difficulties of a ‘little fellow’ inventing a BIG product. Undaunted, his small company nevertheless carved a niche in the marketplace. However, the really huge rewards are going overseas, to companies which were not involved in the invention at all.

Dr. Damadian points out that this apparent injustice (shared by the inventors of such things as the laser, tetracycline, the Early Stall Warning device and many more) was even more economically damaging to the US than to himself. In reality, he says, it is just ‘a symptom of a more widespread disease afflicting our society’. He believes that America is ailing spiritually. Influenced more and more by an evolution-based humanistic education system, America is adrift of its spiritual moorings.

Can such a society, with its relative ethics and increasing abandonment of God’s absolute standards revealed in the Bible, ‘continue to discern the just from the unjust?’ he asks. Will not such a society more and more forfeit the blessings which its forefathers wrought through obedience to God's Law?

He quotes Russian writer Alexander Solzhenitsyn as saying ‘the strength or weakness of a society depends more on the level of its spiritual life than on its level of industrialization.’ Without the general adherence of a society to God’s laws, the most perfect governmental system cannot prevent eventual collapse. ‘Freedom’ will deteriorate to be ‘freedom to be unscrupulous’, because, says Solzhenitsyn, there is no law which can anticipate or prevent this.

Dr. Damadian says emphatically that his greatest scientific discovery was to find that ‘the highest purpose a man can find for his life is to serve the Will of God.’ He recently attended a major seminar at which he heard creation speaker Ken Ham calling for Americans to return to trust in the whole Word of God ‘beginning with Moses and the prophets’. He says that he is tremendously encouraged by the creation science ministry and blessed by it, calling it ‘a courageous exposition of the truth’ and a vitally important message for America today.

He believes that rejection of God’s account of Creation as the foundation for our society is basic to the spiritual, social and economic sickness of our times. We are replaying ‘the seven steps of human regression and social disintegration’ which the Apostle Paul described in Romans chapter 1 as happening subsequent to the rejection of the true God as Creator.

If Genesis cannot be accepted unqualified, what else in Scripture can be taken as the unqualified Word of God? Acceptance of the unqualified Word of God ‘has been the foundation for Western civilization since the printing of the Gutenberg Bible in the fifteenth century’, he says. This has resulted in 200 years of blessing for Western civilization, including a level of individual freedom ‘unprecedented in human history’.

Dr. Damadian says that ‘if America is to be rescued, she must be rescued from the pulpit—it is too late for the White House’. He says that Americans need to realize that any country ‘runs off its spiritual batteries, not off its bank accounts, and when those batteries are drained, its bank accounts will be empty.’

How Does MRI Scanning Work?

Nuclear magnetic resonance is the fundamental principle exploited by MRI scanners. The nucleus of an atom can behave like a tiny magnet since its protons are electrically charged and spinning, and the neutron also has a magnetic field. The only nuclei that lack magnetic fields are those with even numbers of both protons and neutrons, because the particles pair off and cancel out each others‘ field. The atomic nucleus spins on its axis. When the body with its atoms is placed in the magnet of an MRI machine the axes of spin in atomic nuclei line up with the direction of the magnetic field, which has a lower energy than aligning against the field. Radiation of the right frequency can be absorbed and cause the nuclei to switch from the lower energy state to a higher one. A radio coil wrapped around the body injects radio waves and the body‘s atomic nuclei ‘answer back‘ with a radio signal. The radio waves produce the signal by causing the nuclei to flip back and forth from their orientation with the field to their orientation against it.

The hard part is to design a machine to ‘read’ the differing signals from differing tissues in the body (which have different ‘proton densities’-for example more or less water content) and translate this into a clearly defined image.

If you have ever had to have one of these scans, you would have been asked first to make sure you had no metal objects on you. The magnetic pulse is so strong that metal objects would literally fly across the room if close to the machine.

Since our article first appeared in Creation magazine, June 1994, confusion has arisen from the fact that the 2003 Nobel prize for medicine was awarded to two people—neither of them the subject of our article—for magnetic resonance imaging. A substantial controversy erupted over whether Dr. Damadian was deliberately overlooked, especially in view of his well-known views on creation. 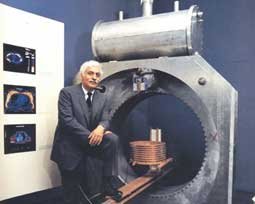 Dr. Damadian with the history-making prototype of Dr. Damadian‘s MRI scanner. The first MR image of a human chest was made with this scanner on July 3, 1977. The prototype is now on permanent display at the Smithsonian Institution‘s Hall of Medical Sciences.

Seldom is any new technology based solely on the work of one person. In the case of magnetic resonance imaging, the basic technology of nuclear magnetic resonance was known for years (and its discoverer was awarded an earlier Nobel prize) before Dr. Damadian’s seminal insights into using it for distinguishing between healthy and diseased tissue. Others have been separately involved in refining and building on existing knowledge. To assure readers of the total validity of the original article (without taking away from those to whom the prize was awarded), the following is supplied: