Wherever there are bushfires, floods, or the personal tragedies of homelessness or poverty, the familiar uniform of the Salvation Army is seen. “The Salvos,” as they are affectionately known “down under,” are seen as synonymous with relief and selfless compassion.

When I found out that one of the highest ranking Salvation Army officers in Australia had subscribed to Creation magazine for years, I just had to talk to him. Hillmon Buckingham modestly uses the term “servant leadership” to describe his role as Commissioner for a region encompassing all of New South Wales, Queensland, and the Australian Capital Territory.

Like a hands-on managing director, with an advisory Cabinet, he is involved in wide-ranging supervision of administration, as well as “supervising and inspiring the troops.” He is also the Salvation Army’s attorney in the Australian Eastern Territory, and has a “wider cabinet” of Divisional Commanders (like bishops) for each of the many areas. In addition to such leadership, his job includes preaching and teaching in local Army churches, called Corps, as well as at the Salvation Army Training College.

Hillmon was born in New Zealand, where his grandfather was the Army’s first convert, who later pioneered the Army up the neighbouring Queensland coast.

Hillmon says, “As a young boy, I knew that he had scars on his hands from when an intoxicated person in Rockhampton attacked him with a knife while he was preaching. My grandfather put up his hands to protect himself, and the knife went through both of them. They arrested this guy and put him in jail. My grandfather, a gifted and astute preacher, let the matter go to court. On the day the magistrate was to hear the case, he freely forgave the man who had done this to him. That of course drew a great crowd, and so on the steps of the courthouse, he preached the gospel of God’s amazing grace and forgiveness towards repentant sinners, through Christ. My grandfather showed me those hands and said that when—not if, when—I became an officer, ‘you won’t get wounds on the hand, because the Salvation Army will generally be respected, but you’ll be wounded in your heart at the apathy toward the gospel.’ He was right.”

Hillmon became a Christian at age nine, after hearing the gospel preached in a little Salvation Army Corp in a small N.Z. town. But due to family circumstances, he was taken out of the army into the Anglican church, where he had every intention of becoming a minister. Even there, it seems, it was hard to get away from “military” reminders. “Our treasurer’s surname was Gun, and the head man was Canon Cartridge. So we had quite a bit of spiritual ammunition,” he chuckled. 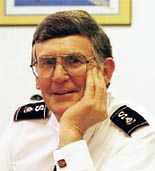 “Jesus obviously believed the world was created in six solar days … so … I don’t have a lot of hang-ups about believing the same.”

“I didn’t want to join the Army because I was an intellectual Christian at that stage, and felt it was beneath my dignity to stand on the street corner with a group of Salvationists blowing their trumpets. But I felt the call of God, through a local milkman who kept praying for me and talking to me, and I had to be humbled. I knelt and asked God to forgive me.”

Commissioner Buckingham sees the wearing of uniforms as a distinct advantage. “A Salvationist wears a uniform because he wants to be identified as a soldier of Christ,” he said. One of his soldiers was going into a hospital on a routine visit, when down the steps came a woman in deep anguish. “Oh, the Salvation Army,” she said, “I need you to pray with me and my husband—he’s just been told he has terminal cancer, and I don’t know what to do or who to turn to.” The “Salvo” was able to share the love of Christ with the couple in their time of greatest need.

“Many people know,” says Hillmon, “of the Army’s mission to the unconverted in hotels and bars, and the uniform takes us into places where nobody else could go. It identifies us as responsible people, and above all it identifies us with the gospel. Even if you are mistaken for a security guard, it can give you an opportunity to communicate the gospel by saying that you are—an eternal security guard.”

Was there a risk that the Salvation Army could become just another social help organisation? He said that there was no doubt that this could happen. “William Booth was a West End London fiery preacher of the gospel. He saw his calling to see people delivered from their sinful way and set absolutely on the path to Heaven without equivocation. But some of the people that came his way were so poor and derelict, often without enough food to eat, that Booth established the Salvation Army Social Fund, promising that he would not use the money for anything other than helping the less fortunate. And we are still legally obligated to that, so every dollar given to the Salvation Army on the street anywhere in the world is used to help the poor and disenfranchised. Our preaching ministry is totally supported by Salvationists themselves.

“We see the gospel as the most important part of our ministry; it’s possible to have a person cared for but eternally lost. In Australia, we have more than 178 Corps preaching stations, where the gospel is regularly preached. And if I have anything to do with it, the Salvation Army will always be an army of Salvation. But at the same time, General Booth was right—you can’t preach to a man who has an empty stomach and is shivering with cold.”

I asked Hillmon Buckingham about where he saw the Christian church in Australia in general. Despite some positives, he said, “I get disturbed when I find that the church has become so worldly. Paul said ‘Woe is unto me, if I preach not the gospel’ [1 Cor. 9:16], but today there is so much pragmatism, it is as if we are tailoring the message to what we think people need to hear, but in the process losing the message itself. Whenever I speak with young people or my minister friends, I tell them that this is our primary function, to preach the gospel. If we ever become just an entertainment centre, I think we have lost the plot altogether. And I think I see some evidence in the church that this could happen.”

Hillmon says he first came into contact with creation ministry and this magazine through the visit of ICR scientist and debater Dr Duane Gish to Victoria University in Wellington, New Zealand, nearly 20 years ago. He says, “The who’s who of the university’s intelligentsia was there. And they were unable to unseat his position intellectually. I had always been a believer in Genesis—it is a part of being converted—but this lit up for me the fact that we needed to be ready to give a reason for the faith that was in us [1 Peter 3:15], that we don’t know everything, but that there are sufficient answers, that we don’t have to be ashamed of the gospel. Some leaflets from your ministry in Australia were on hand, and I’ve been subscribing ever since. Your magazine has been so very useful to me—it doesn’t run down others” intellect, and there are so many well presented arguments—the colour, the style—I’ve been able to sit down with people, it’s a real advantage to share the magazine with them as part of sharing the Word of God.”

Hillmon said that he had experienced all the many theories—day-age theory, gap theory and the rest—which try to “harmonize” Genesis with evolutionary science or billions of years. “My touchstone is this,” he says, “Did Jesus Christ say any of this happened? Jesus obviously believed that the world was created in six solar days, and that Adam and Eve were made right at the beginning of creation [Mark 10:6], not towards the end of billions of years. So if Jesus Christ believed that, I don’t have a lot of hang-ups about believing the same.

“Then there’s that sin problem that keeps rearing its head. The account in Genesis of the Fall of our first parents is so coherent and corroborated. And of course, no man can come to Christ except the Father draw him [John 6:44]. So people who are not born again are arguing from a position outside. The world’s way today is, ‘Show me all the facts, then I’ll believe,’ but the Bible says to us, in essence, ‘Believe, then you’ll understand.’ But it does not demand blind faith—there is enough evidence from creation [Romans 1:18–20] and conscience [Romans 2:14–15] that no one has an excuse.”

“I think that the watering down of the gospel,” says Hillmon, “and particularly its marrying with evolution, has caused many to believe it’s going to be OK, we’re going to save ourselves. But there is no brave new world without the gospel—if any man be in Christ Jesus, he is a new creation [2 Cor. 5:17]. We have to be vigilant about the gospel as the priority in our lives. We’ve got to take the Bible and teach the Bible as it is given to us. And when we come to a part we can’t understand, say, ‘It’s we who can’t understand, the Word of God is not wrong.’ And that’s the approach I see in your magazine, which has been a great encouragement to me.”

It was a great encouragement to me, too, to have spoken with Commissioner Hillmon Buckingham. Here was one who, despite the rampant compromise in the church (including some in his own denomination) was standing firm on the truth and authority of the whole Word of God.

Warwick Armstrong has a professional background in marketing, and wide experience in communication and creation evangelism. He is New South Wales co-ordinator of the Answers in Genesis ministry.