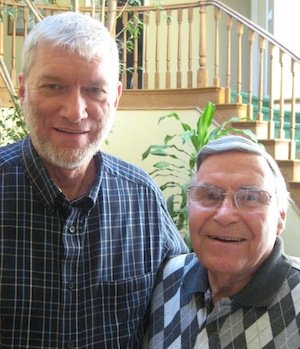 On this website earlier today, we shared the sad news that famed creationist debater Dr. Duane T. Gish had passed away this morning. This great defender of the Christian faith was a tireless and bold defender of the book of Genesis. The same courage that marked his service during WWII in the Pacific Theater of the war was seen in later years as he appeared about 300 times at venues around the world as he took the stage to debate prominent evolutionists, sometimes facing a hostile audience who jeered his defense of Genesis.

Dr. Gish, born in Kansas, died at age 91 in California. He held a PhD in biochemistry from renowned U.C. Berkeley. In the latter decades of his life, he served as a vice president at the Institute for Creation Research. While this indefatigable “travelling creation evangelist” retired from full-time ministry at age 84, he remained available to speak and write when called on as ICR’s senior vice president emeritus. Dr. Gish was the author of the classic creationist text on paleontology, Evolution: The Fossils Say No. And with his doctorate in biochemistry, he presented devastating critiques of the so-called “origin of life” lab experiments, such as the famous Sidney Fox demonstrations that still appear in some science textbooks today. He taught at Cornell University Medical College, and then he returned to Berkeley as a research associate in biochemistry. Dr. Gish later became a senior research associate in biochemistry at the Upjohn Company and was there for more than a decade. During that time, he helped form the Creation Research Society (1963).

Dr. Gish was a dear friend to many AiG staff members.  For my part, I often told people that he was my “spiritual father.”  In fact, one hour before I heard the news of Dr. Gish’s passing, I was working on an article on this great Christian man’s legacy and his impact on my life.  Because the theme of AiG this year is “Standing Our Ground, Rescuing Our Kids,” I have been writing an article that fondly recalls Dr. Gish and how God used him to rescue me from my evolution-caused doubt about my fledgling Christian faith. Here is what I have written thus far about my “spiritual father,” as below I share parts of an article that will appear later.

As a 17-year-old who had made a profession of faith a few years earlier, I was facing something of a crisis of faith. Even though I was attending a Christian high school, I was not being given an adequate defense of the Christian faith. Meanwhile, all around me I was becoming “evolutionized” though many powerful forces outside my school environment.

I grew up in the Los Angeles area, where many impressive museums promoted the evolutionary worldview. In addition, TV documentaries like those produced by National Geographic and Los Angeles Times articles often pushed evolutionary beliefs without questioning them, and collectively they were causing me to wonder: could I really trust the Bible from its very first chapters?

At age 17, I was intrigued to learn that Dr. Duane Gish, a scientist with the newly formed Institute for Creation Research in San Diego, was coming to our school to conduct a workshop on the topic of creation vs. evolution. The year was 1972. As I recall, my Christian school only generally taught that God is the Creator of the universe. I don’t remember an active defense of the historicity of Genesis that also included a refutation of the evolutionary teaching I was receiving from the secular world.

Dr. Gish’s appearance caught my attention because his biography stated that he had an earned doctorate in biochemistry from one of the most prestigious universities in the world, U.C. Berkeley. I noticed, too, that his upcoming presentation at my Christian school was to be on how the fossil record supported creation and refuted evolution. As someone who accepted the belief, for example, that Neanderthals were a confirmed link between modern humans and an ape-like ancestor (yes, I was a theistic evolutionist), I wanted to hear what this scientist and Christian said about the supposed fossil evidence for evolution. This evidence for evolution, presented so convincingly by the secular world, was causing me to doubt my fledgling faith. Looking back, I was on the verge of becoming another sad statistic in the massive youth exodus from the church, as was to be chronicled by AiG President Ken Ham and Britt Beemer 40 years later in their book Already Gone.

I was a little embarrassed for Dr. Gish when he showed up at our high school. Students had the opportunity to choose from a variety of workshops on different topics that day, and I don’t recall more than five or six high school students meeting in a large classroom to listen to a man who drove two hours each way to speak. Dr. Gish’s one-hour talk, however, was mesmerizing.

Dr. Gish went through the different supposed evolutionary transitions from fish to amphibian, amphibian to reptile, reptile to mammal, and then on to humans. For example, he easily dismissed Archaeopteryx as the evolutionary transition between reptiles and birds. Later, Dr. Gish examined some of the “ape-men,” such as Nebraska Man and Piltdown Man, which were shown to be wrong (by evolutionists themselves). Then he dealt with the evidence for Neanderthals that had been so convincing for me, and he explained that this allegedly primitive and brutish creature was actually fully human.

That lecture by Dr. Gish—which was also peppered with humor—was absolutely revolutionary in my thinking. The Bible that I was beginning to doubt was now seeming trustworthy to me, all in the matter of just an hour. Inwardly I exclaimed, “Hallelujah!”

When Dr. Gish returned to San Diego later that day, he may have been wondering why a full day was set aside in his busy schedule (after he had just joined ICR) to speak only to a handful of teenage students. But during the following year I was pleased to share with Dr. Gish that I decided to study creationist apologetics under him, Dr. Henry Morris, and Dr. John Morris in San Diego at ICR—men who were pioneers in the modern creationist movement. I enrolled at Christian Heritage College, where ICR was a division at the time. In a few years, I would be hosting and producing ICR’s weekly radio program, and for the past 25 years I have been involved in fulltime creation ministry.

At one time, I was Dr. Gish’s teaching assistant for his apologetics courses at Christian Heritage College (now called San Diego Christian). When a debate took him out of town, he entrusted me to give a lecture to his college students, for I had learned so much under his tutelage. One time, just before he walked on stage to engage yet another evolutionist in a debate, he nudged me and said, “Mark, you can take it from here! I’m going home.” This man had a wonderful sense of humor. I would imagine that if each one of his debate opponents had gotten to know him personally, they would have found Dr. Gish to be a fun, avuncular man, traits not always associated with a serious scientist.

During his tenure at ICR, Dr. Gish became internationally known for the 300 debates he conducted with evolutionists. He was so successful in them (as even evolutionists often grudgingly admitted) that creation-evolution debates became rare. Possible candidates to debate Dr. Gish recognized him as a formidable foe. They simply did not want to share a debate platform with him.

When I spoke at the opening of AiG’s Creation Museum in 2007, I made mention of Dr. Gish’s legacy, professionally and personally. I declared that the AiG ministry stood on the shoulders of Dr. Gish and his colleague, the late ICR president, Henry Morris, because of the groundbreaking work they had conducted and shared with the world.

Biblical Christianity has lost a giant this week. I have lost a dear friend whom the Creator used to confirm my faith and rescue me from doubt, who then encouraged me to join the creationist movement. I ask that you please pray for his widow Lolly, four children, several grandchildren, and others close to this wonderful man of God and Bible-defender. (Funeral services are pending as we post this tribute.)

Editor’s note: On Ken’s Ham’s blog tomorrow, he will pay honor to Dr. Gish, someone Ken knew for more than 30 years and who worked directly under him for seven of those years at ICR.