John Ray was born in 1627—the same year Robert Boyle was born and Francis Bacon died.

Boyle was the founder of modern chemistry, and Bacon was the originator of the modern scientific method which combined experimentation with rational argument. In his book, The Founders of British Science, J.G. Crowther describes the relationship among the work of these three committed Christians as follows:

“The work of recording and classifying the contents of nature, which, as Bacon had indicated, was the first step in creating a modern universal science, was led in chemistry by Boyle. In biology the comparable work was carried out by John Ray.”1

In the preface to his book on British plants published in 1690, Ray expressed gratitude to God that he was born in this era, when Bacon’s idea of experimentation and logic combined had replaced the previous philosophy of logical argument alone (i.e. without a starting point in the real world) which was a leftover from ancient Greek thinking. 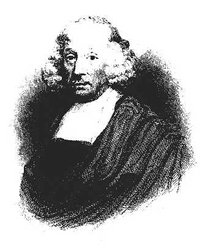 John Ray was born on November 29, 1627, in the English village of Black Notley in Essex. He was the youngest son of the village blacksmith. His mother collected and used herbs for medicinal purposes, and she was well known in the area for her care and compassion for those who were ill. John’s interest in plants began in his early childhood while collecting herbs with his mother.

John received some basic education in his home village. It appears that the local vicar recognized that he had academic potential and arranged for him to attend grammar school in nearby Braintree. Again his potential was recognized and, at the age of 16, he entered Trinity College at Cambridge University.

Unlike most of the other Cambridge students, who were the sons of rich gentlemen, John Ray was poor and unable to pay the necessary fees. As with Isaac Newton subsequently, Ray was exempted from fees by acting as a servant for the staff of Trinity College. He obtained his master’s degree in 1651, and then stayed on at Trinity college as a lecturer.

Ray was known as a modest and sensitive man who was deeply committed to his Christian faith. He sought to turn the thoughts of his students from materialism to God. Crowther states:

“Ray suggested that, instead of devoting themselves to games and dissipations, they would gain more satisfaction from the contemplation of the wisdom and goodness of God, as demonstrated in the exquisite works of nature.”2

Although botany and zoology were not yet accepted as subjects in the university, Ray invited his students to join him in their own time in researching the local flora and fauna. Ray published his first book on botany—a catalogue of the plants around Cambridge—in 1660.

Ray had always intended becoming an ordained clergyman, but unfortunately he lived in an era when there was considerable interference by the State in the affairs of the church. When the Royalists returned to power, they insisted on re-establishing extreme ritual in the church. However, Ray “distrusted a religion that depended so much on external practices. He gave far more weight to inner spiritual institutions and the refinements of conscience.”3 Ray would not compromise his beliefs and he was forced to leave the university in 1662.

Ray was now unable to support himself and his widowed mother. However, Francis Willughby (1635–72), a wealthy former student of Ray’s, suggested that they should undertake scientific research together at Willughby’s expense. Ray’s dismissal actually became a turning point in his life that enabled his great work in biology to be accomplished. As we read in Romans 8:28—“And we know that all things work together for good to them that love God, to them who are the called according to his purpose.”

For 10 years, Ray and Willughby traveled around the British Isles and the rest of Europe, making observations and collecting specimens. While Willughby focused on animals, Ray focused on plants. Their intention was to document living organisms and classify them into a limited number of classes.

In 1670, Ray published a catalogue of plants of the British Isles. “It contained a long section on the medicinal use of plants, which denounces astrology, alchemy, and witchcraft, and is ruthless in its demands for evidence.”4

Although Willughby died in 1672, Ray was able to continue their great project with funds generously provided for this purpose in Willughby’s will. As well as proceeding with his own work on plants, Ray undertook the task of analyzing, classifying, and interpreting Willughby’s vast collection of data on animals. Ray published a book on birds in 1676 and a book on fish in 1685. The book on birds “laid the foundations of scientific ornithology.”5

Ray then undertook the documentation and classification of the plants of Europe and beyond into a generalized catalogue of the plant kingdom. He classified flowering plants according to whether they had two seed leaves or only one. “This is the division into dicotyledons and monocotyledons which all subsequent botanists have adopted.”6

It was Ray who specifically defined what was meant by a species. Linnaeus (another committed Christian) subsequently used Ray’s species as the building blocks of his classification system in which related species were grouped into genera, related genera were grouped into higher categories, and so on. Thus, Ray’s generalized catalogue of plants “laid the groundwork for systematic classification, which was to be brought into modern form by Linnaeus.”7

In his 1693 book on reptiles and mammals, Ray classified animals with respect to teeth, hooves and toes. This logical classification of animals was a vast improvement over the previous system.

Ray’s insights were ahead of his time in other areas as well. As Asimov states:

“He declared fossils were the petrified remains of extinct creatures. This was not accepted by biologists generally until a century later.”8

Ray saw no conflict between his Christian beliefs and his scientific work.

Ray saw no conflict between his Christian beliefs and his scientific work. In fact, he believed that scientific investigation “was a proper exercise of man’s faculties and a legitimate field of Christian inquiry.”9

Ray adamantly believed that all things—the heavens, the earth, and living organisms—were created by an infinitely wise and loving God. He believed that the infinite detail of the structure and function of living organisms was clear evidence of Divine wisdom. He expressed this in two widely read books. The second of these, entitled The Wisdom of God Manifested in the Works of the Creation, became a classic. He also wrote a theological book entitled Persuasive to a Holy Life.

Ray wrote a paper for the Royal Society completely opposing spontaneous generation—the idea that life can arise spontaneously from non-living matter.10Ray quoted experiments by Francesco Redi which contradicted spontaneous generation. Ray said that “My observation and affirmation is that there is no such thing in nature”11 and he referred to spontaneous generation as “the atheist’s fictitious and ridiculous account of the first production of mankind and other animals.”12

Ray never doubted that the plants and animals were created by God in distinct kinds, but at one stage he questioned whether one species could change into another. However, after extensive scientific investigation of plants and animals, he concluded that species had remained distinct. Ray concluded that the plants and animals were “the works created by God at first, and by Him conserved to this day in the same state and condition in which they were first made.”13 Unfortunately, this statement, understood as “fixity of species,” played into the hands of the evolutionists. Darwin observed different “species” of finches on the Galápagos Islands and drew the reasonable conclusion that they had descended from a small number of finches which had arrived on the islands. Therefore, species were not “fixed,” and creationists were wrong. However, Ray would probably have seen that Darwin’s finches were just varieties within a created kind, and no more proved evolution than does variety within dogs.

John Ray had married at the age of 44 years. When his mother died in 1679, he and his wife moved into the house that he had built for his mother in Black Notley. In his later years, his four young daughters were of great assistance to him in collecting and breeding specimens.

Despite his success and his fame, Ray maintained his modesty and interacted easily with rich and poor alike. He remained living and working in Black Notley until his death on January 17, 1705. Describing Ray after his death, a friend wrote that you would find—“in his dealings, no man more strictly just; in his conversation, no man more humble, courteous, and affable; towards God, no man more devout; and towards the poor and distressed, no man more compassionate and charitable.”14

During his long and fruitful life, Ray had laid the foundations for both botany and zoology, as well as maintaining a consistent Christian witness through both his behaviour and his defense of biblical teaching.