A tribute and memoriam for Dr. Henry Morris, Founder and President Emeritus, Institute for Creation Research.

As I sat in a San Diego church today, listening to a eulogy for Dr. Henry Morris, the father of the modern creation movement and a great defender of the Christian faith, my mind drifted back to a verse that our Bible study group had considered on the very weekend Dr. Morris passed away (Saturday, February 25): “Teach me, O Lord, to follow your decrees; then I will keep them to the end” (Psalm 119:33).

I cannot think of anyone who lived out that verse more than Dr. Morris.1 Dr. Morris was as devoted a reader and follower of Scripture as I have ever known. Moreover, a passion for proclaiming biblical truths to others was the hallmark of his long life, even more so than his remarkable scholarly achievements.

Dr. Morris, who died in San Diego last weekend at the age of 87, wrote more than 60 books on apologetics and other Bible themes. Fittingly, he wrote this about Psalm 119:33 in his commentary on the book of Psalms: “The godly man does not arrive at spiritual maturity instantaneously. It is a lifelong process, but every stage of that growth must come from the Word.”2 Dr. Morris was firmly grounded in God’s Word, and his godly life was a testament to the truth of Psalm 119:33.

It is widely recognized today by both friend and foe that the modern creation movement—now growing steadily across America and other western nations—had its genesis in the early 1960s. But it happened in a somewhat surprising manner.  First, it came through God using Henry Morris, a soft-spoken, bespectacled academician living in central Virginia. Second, the resurgence of the creation movement in modern times (a movement that had become relatively quiet since the Scopes trial of 1925) was launched not at a major rally led by Dr. Morris nor through any controversy in the courts or schools—nothing noisy whatsoever. In fact, the event was not even associated with the first chapter of Genesis and the account of creation.

Professor and Head—Department of Civil Engineering, University of Louisiana at Lafayette; Acting Dean of Engineering, Fall (1951–56)

In addition to dozens of books on biblical apologetics and his well-known secular text on hydrology, Dr. Morris wrote four articles on hydraulics in the Encyclopedia Americana.

The resurgent movement’s surprising trigger was the release of Dr. Morris’s groundbreaking book The Genesis Flood (coauthored with Dr. John Whitcomb).  But what a stir that book created. The impact of this now-classic work was such that many church historians have concluded that Dr. Morris was a giant—perhaps unparalleled—in the battle for biblical inerrancy, as he defended the most-attacked book of the Bible. This unassuming scholar was to spearhead an international movement that was to shake the very foundations of the evolution establishment and, just as importantly, challenge the church to accept biblical authority from the very first verse.

Soon after the book’s publication, invitations for Dr. Morris to speak nationally on the Genesis Flood (as well as on the creation account of origins), combined with a growing network of Bible-believing scientists and engineers he assembled, led him (along with now-famous Christian novelist Tim LaHaye) to start the Institute for Creation Research in 1970.3

Not too many people are aware that Dr. Morris had already become well known within academic circles (especially in the discipline of hydrology), mostly through a secular textbook he authored, Applied Hydraulics in Engineering. It was a widely used text found in many secular universities around the world.  (In fact, my unbelieving uncle read this textbook as a civil engineering student in Canada; he once told me that he was clearly impressed with Dr. Morris as an academician and writer, but my uncle did not manage to hide his surprise when he learned that Dr. Morris was a biblical creationist.)

After Thursday’s memorial service, Ken Ham, AiG–USA president (who also flew out to attend the service of his mentor—see his blog), shared this: “Dr. Morris is one of my heroes of the faith. Ministries like AiG—and so many other creation groups worldwide—stand on the shoulders of this giant of a Bible scholar and creation researcher.” (By the way, joining Ken and me at the celebration service to pay his respects was AiG's chairman of the board, Pastor Don Landis.)

Dr. Whitcomb, coauthor of The Genesis Flood, spoke to AiG earlier this week about his dear friend and colleague. Dr. Whitcomb especially recalled how Dr. Morris had affected his life in so many ways. No event was more important in their half-century relationship than what happened during their first meeting in 1953. After a lecture that Dr. Morris gave at Grace College in Indiana, Dr. Whitcomb (a Grace College professor at the time) decided to give up the compromise view called the “gap theory” when Dr. Morris showed that Scripture clearly argued against adding long ages to the Bible. After frequent letter exchanges in the 1950s, they eventually decided to cowrite what would become The Genesis Flood (1961).

Dr. Whitcomb cut short an Atlanta, Georgia, speaking engagement (with the blessing of the host church) in order to be at the memorial service on Thursday. He spoke to approximately 750 people who gathered at Shadow Mountain Community Church in eastern San Diego to pay their respects to this giant of the Christian faith. “Henry Morris still speaks. His books and tapes will continue to have a profound impact around the world,” Dr. Whitcomb said.

Knowing Dr. Morris for so many years (and having had the privilege of working with him for several of them), I can think of a number of qualities that help describe this godly man, eminent scholar and exceptional defender of God’s Word. 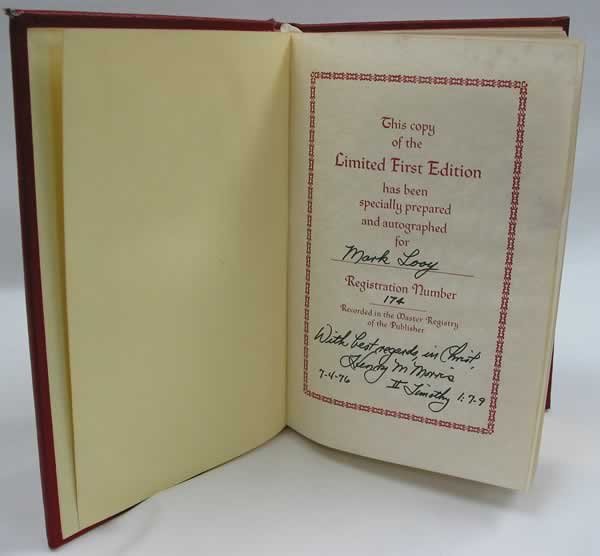 While Americans were celebrating their country’s bicentennial in 1976, Dr. Morris did not take the day off. He spent much of July 4, 1976, signing copies of his just-released, monumental commentary on Genesis, The Genesis Record. View larger image.

Tirelessness—One example of devotion to his life’s work of defending the authority of the Bible was manifested inside the copies of the first run of his other classic book, The Genesis Record (a tool, along with The Genesis Flood, that God used to get Ken Ham in creation ministry). Look closely at the inscription found in the photo to the left (click to enlarge). While America was celebrating its bicentennial on July 4, 1976, what was Henry Morris doing? Taking the day off? He was spending much of the day personally signing hundreds of copies of his new book.

A devotion to God’s Word—Henry was a walking Bible concordance. On more than one occasion, I would stop him in the hall and ask him where I could find a certain passage of Scripture (when a concordance was of no help). Invariably he would not only know the book of the Bible where the passage was found, but he could also cite chapter and verse. As much as Dr. Morris was knowledgeable about so many fields of science, it probably did not surpass the knowledge he had regarding the Word of God. That was reflected in many of the “meaty” devotionals he wrote for ICR’s Days of Praise daily devotional booklet, where his insightful gleanings from Scripture easily eclipsed most of what you would read in typical devotionals today. They were full of substance, not fluff.

Humility—For all he did, Dr. Morris never appeared to boast of his many significant accomplishments. He came across as quiet and reserved. But that could be misleading to those who did not know him well.  Dr. Morris, for example, was formidable in creation/evolution debates, and he would not hesitate to tackle compromise in the church when he saw it.  But he did so with grace and in a gentlemanly fashion.

In addition to the many professional connections I had with Henry, there were also some personal ones. The reason I moved to San Diego in 1973 was to study under Dr. Morris and Dr. Duane Gish (my other “spiritual grandfather”) at Christian Heritage College (now called San Diego Christian College), of which ICR was a division at the time.4 One course I took from Dr. Morris featured a mimeographed manuscript of what was to become another outstanding apologetics book of his: Many Infallible Proofs.

Dr. Morris leaves his wife of 66 years, Mary Louise, and five children (including Dr. John Morris, president of ICR), in addition to 17 grandchildren and 9 great-grandchildren. John and his siblings knew well what their father believed regarding why there is death in this world (yet hope), for Henry once wrote:

The world is now under God’s Curse (Genesis 3:17) because of man’s rebellion against God’s Word. This ‘bondage of corruption,’ with the ‘whole world groaning and travailing together in pain’ (Romans 8:21, 22), is universal, affecting all men and women and children everywhere. God did not create the world this way, and one day will set all things right again. In that day, ‘God shall wipe away all tears from their eyes; and there shall be no more death, neither sorrow, nor crying, neither shall there be any more pain’ (Revelation 21:4).5

I believe that this good and faithful servant of God will receive one of the warmest “well done” accolades ever heard in heaven as Dr. Morris enters the presence of his Creator—and Savior.