When I was interviewing Gary, I was fascinated by the thought of a Christian arresting people, and the like—so he asked me to spend a day with him.

The heroin capital of Australia? That’s the unfortunate reputation of the Sydney suburb of Cabramatta. Here I was in the heart of it, on patrol with one of Australia’s toughest, most respected policemen, Inspector Gary Raymond (since promoted to Superintendent). In spite of his high rank, Gary is a ‘hands-on’ law enforcer. His familiar profile on the streets has led people to call him the ‘Sheriff of Cabramatta.’

It all started when I was interviewing Gary, a committed Christian supporter of the Answers in Genesis ministry, for this article. I was fascinated by the thought of a Christian arresting people, and the like—so he asked me to spend a day with him.

On the morning we set off, one glance at Gary’s revolver reminded me of what we were getting into. It was sad to come across the pitiful, forlorn addicts, and the many discarded syringes and needles.

That day, I observed several ‘busts’ of petty crooks and drug dealers. We ran into some known members of major drug gangs—I was even introduced to one of them! It soon became clear that drug dealers and users were usually one and the same. The habit is so expensive, that users deal or steal (or both) to support it. Or they turn to prostitution.

Many would say ‘so what?’ Aren’t these just junkies who have created their own problems? Won’t tough policing get them off the streets and into the jails where they belong? Who cares?

Superintendent Gary Raymond cares. I could tell in the kindly and godly way he dealt with everyone he met, including these unfortunates, and by the way they responded to him. I saw him call out to a pregnant addict that he was praying for her unborn baby’s health. She replied, ‘Thank you, I know you are.’ He stopped in the street to talk to another addict, a prostitute, and prayed for her that Jesus would make Himself known to her, that she would open her heart to Him so He would wash her clean of all sin and hurt, giving her the chance to start all over again. Her tears flowed freely. 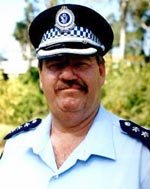 We spoke to a drug dealer who was a real mess, his eyes telling of the fear, confusion, and rejection inside. He agreed that his life was a sewer and he was on his way to jail again. Gary told him that there was no way out via drugs, counselling, or programs; there was only one way, through asking Jesus to forgive his sin.

I witnessed a couple being arrested by Gary’s colleagues for having drug implements and stolen credit cards in their car. Two hours later, I saw the same man entering a ‘restaurant’ known for supplying drugs—even though he knew we were across the street, watching. Desperation!

Gary is no ‘soft touch’—his toughness is well-known on both sides of the law-enforcement divide. But he said to me that even when he was arresting hardened criminals, he was conscious that they, too, were not some collection of evolutionary accidents, or a lower class of human being, but were created in God’s image.

‘I’d had years of Christian teaching at Sunday school, but never any commitment. I was a success—I’d become part of an elite Police Rescue team that most only dream about joining.

‘I felt superior and proud—I didn’t need God, or any other person. But police officers are like anyone else—we’re sinners. People wonder how a law enforcer can be an offender at the same time—but I was. I was an incredibly selfish person who was offending a holy God, and often offending other people, too. And my life was in a mess. My marriage was destroyed, and I was drinking heavily.’

At one stage, Gary even contemplated suicide. This was ironic; as a ‘suicide negotiator,’ he had talked over 200 people out of jumping from Sydney Harbour Bridge, skyscrapers, and the like. He says that all his resources gave out; he fell on the floor and ‘screamed out the most wonderful words—“Jesus, I need you now.”’ And on that floor, Gary knew that his sin had been forgiven, as he appropriated the salvation that Jesus had died to provide. And he experienced God’s healing of the many hurts in his life.

I could identify with Gary—even though neither of us were Christians as young people, we had a Christian foundation; society had not yet been so thoroughly ‘evolutionised’ as now. So when the ‘chips were down,’ we knew there was somewhere to turn. Gary agreed with me that it is a lot harder nowadays, and that much of the despair leading to drugs and suicide, which has increased so much in the last few years, is aggravated because people basically see no purpose to life.

I asked him what he would say to a typical product of secular education; one who believed that life was ultimately meaningless, because we came from accumulated accidents, from chemical goo via the zoo. He said,

‘I would challenge him to question and check out what he had been taught. I spent years as a qualified police investigator, able to discern lies, fraud, and mischief. Most people are just too gullible, unskilled, or lazy to check things out—but God’s Word checks out every which way, cover to cover, starting with six-day creation.’

Often, says Gary, when people are confronted with evidence that what they have believed may be a lie, there is a strong psychological reaction.

‘It’s like post-traumatic stress, because suddenly it’s been revealed to them that their ancestors didn’t swing through trees, that there really is a God and that people will have to face judgement. This can even make them act very aggressively. I believe that a lot of the aggression we see in evolutionists is the gradual process of them being exposed as foolish. Particularly if they’re academics, and have a lot to lose.’

Police Superintendent (and former detective) Gary Raymond tells of the relationship of crime-solving to creation/evolution:

‘Say that a woman’s been murdered. Neighbours have reported the couple’s fierce recent brawling, and the husband’s fingerprints are all over the knife. All the clues seem to fit the obvious answer—the husband did it. Most of the investigating police are content to leave it at that. But one of them digs a bit deeper into the scientific evidence of the murder’s timing. The result blows the favoured theory out of the water; the time his wife was stabbed was right when her husband was at a function with 5 judges and 11 policemen! The same facts regarded as “proof” now turn out to fit another story—the fingerprints are there because the husband used the knife to carve the roast, and so on. (Looks like the butler did it after all!)

While on the topic of fingerprints, Gary went on to say,

‘For the last 30 years, they’ve taken prints from huge numbers of people and put them into computer databases. Even from Egyptian mummies, and from paintwork that’s 3,000 years old, looking for a match. And so far—not one match. We’re all completely unique, just as God has designed us.’

His perspective on creation not only gives Gary powerful witnessing tools in this evolution-saturated culture, but he realizes that just as he, as God’s creation, is unique and special, so are the people he is dealing with. He says,

‘I need to treat these people as if it was Jesus who was arresting them. I need to remember that I, too, was separated from God because of sin. God said to me, “Hey, listen, you’re not only a law enforcer, but an offender, too.” So even though I sometimes get angry at people, I need to love them, just as God loved me in spite of my sin.’

Gary explained how important little acts or omissions could be. For instance, as minor punishments, police officers

‘can deprive someone of a blanket, or leave them in an uncomfortable position with handcuffs for just that little extra bit of time. Not enough to fall foul of regulations, but it happens often enough that some offenders have asked me why I haven’t deprived them of something or another, and I tell them it’s because I’m a Christian, and it’s not right.’

He says it is important

‘to make them comfortable, make sure they’ve got something to drink and eat, a comfortable place during the interview, and so on. I do that because God, through Christ, was kind to me in giving me salvation, and so I pass that kindness on.’

As the day ended, it was painful to contemplate the many ruined lives bearing testimony to the end result of decades of evolutionary/humanistic brainwashing. For decades, all of us (even little children) have been indoctrinated—through the public education system, the TV and more—into this anti-God philosophy which takes away the meaning of life and morality. As Gary put it to me,

‘If you think you’re just an animal that came from some explosion and then from some chemical soup, what’s the use? Number one, there’s no accountability. Number two, there are no rules—you just make up your own. Number three, get the best while you can, life’s a feeding frenzy. There’s no purpose, nowhere to go. Whether you’re rich or poor—same thing.’

He is right. It isn’t just in the streets with the drug dealers and prostitutes—the disease is everywhere, in our suburban complacency, as the ‘evolution is a fact, God is superfluous, and the Bible is wrong’ message is thumped out continually.

This evolutionary clique promotes ‘tolerance’ but will tolerate no opposition to their humanistic religion. (I thought of the atheist paleontologist who recently told me with glee how he weeded creationists out of positions they held.)

Humanism’s fruit is always hatred, meaninglessness and death. What a joy it was to patrol the streets with a man of real courage, who knows that Christ alone is our refuge, our inner strength, and gives purpose and meaning to life.

While millions swallow the evolutionary lie, refusing to consider the claims of Christ, the people Gary is reaching have no illusions about their being good enough to earn a place in heaven. Many are open to the gospel, to coming to know that they were created in the image of the Creator God.

They are open to accepting that they are of Adam’s helpless race, and need that forgiveness which can only come through Jesus Christ. I thank God for Inspector Gary Raymond—God’s man in the right place at the right time.