What a Dog’s Nose Knows!

If you have been to an airport recently, you may have noticed an increased number of canine staff on the TSA payroll, weaving through the security lines and along the busy corridors. In the nine airports that I have been in the last six months, I have seen German Shepherds, Belgian Malinois, and Labrador Retrievers working these patrols. Beagles are another popular breed for this line of work. They are all sniffing out the scene for signs of something amiss. Depending on their training, they can be sniffing for anything from illegally imported meats to drugs to firearms. What about dogs makes them the best candidate for the job, and why these breeds of dogs?

In the Dog Spies blog, Scientific American highlighted a recent study that starts to answer some of these questions.1 In the study, the researchers had two main goals: to identify a test to assess a dog’s ability to detect scent that did not require previous training, and to compare domesticated dogs’ scenting ability with that of hand-reared wolves.2 The dogs were placed in one of three groups—scenting breeds, non-scenting breeds, and short-nosed breeds. A fourth category was for wolves. Each animal had four tests at each level.

The test, which is like the find-the-pea-under-the-cup game, had four overturned bowls in a line. Only one had a food reward under it. The dog or wolf was then walked along the line until it sniffed out the food or until the allotted time had run out. There were five levels of difficulties. In the first, the food reward was in an open plastic container. For levels 2–4, the food was covered with a lid with a decreasing number of holes in the top. For level five, the food was covered by a solid lid.

The results of the test were both expected and surprising. All three dog categories and the wolf category were similar (not statistically significantly different) for the first 4 levels of the testing. At the fifth and hardest level of the test, the non-scent group and the short-nosed group had the same number of correct answers as random guesses. The wolves and the scenting breeds continued to be able to detect even a subtle odor with greater success. A week later, they retested some of the dogs and the wolves. All the dogs scored the same score as they had previously. The wolves all scored significantly higher.

Got a Nose for Details? 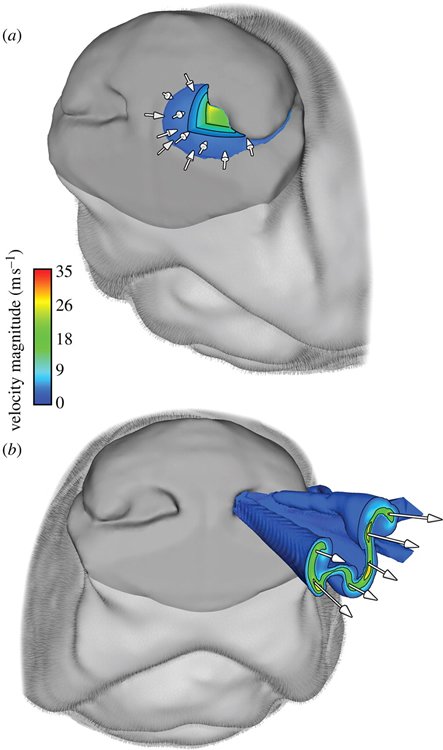 To appreciate these results, we need to understand the inner workings of canine olfaction. The sense of smell needs several key physical traits. It needs a way to bring air-carried scents to cells that can bind to these scents and send information through nerves going to the olfactory lobe of the brain. This type of odor detection is common to all mammals; but canines differ in their mechanism of airflow, the number of receptors on their nasal cells, and the amount of their brain devoted to interpreting the data. Dogs breathe in through the dorsal or higher part of their nostrils and breathe out through the ventral or lower part of their nostril. This creates a streamlined sampling of air for scents. They also are taking in different air samples with different scents in each nostril, allowing them to take both nostrils’ information and combine it to let them know the location from which a scent came from.4 Dogs have approximately 220 million receptors in their nose compared to a human that has approximately 6 million.5 The volume of the olfactory lobe of their brain is three times that of our own and 31 percent of their total brain volume compared to our 0.1 percent, allowing them to utilize all the information they receive.6

Understanding the complexity of the physical aspects of olfaction both physiologically (the chemicals) and morphological (the physical structures), we also need to be aware of the information it takes to make this all happen. The physiological and morphological parts are known as an organism’s phenotype. Their genotype is the genes that are stored in their cells that tell how to make these components. Current research estimates that there are over 800 genes needed to encode these components—the largest gene family in mammals currently identified. Fifty percent of these genes are highly conserved, or there is little variability among mammals. The other 50 percent is highly variable, but trends can be seen among certain kinds and even breeds of animals.7 This is why the basic components of all mammal olfaction are the same, while different animals have different variations of these components, leading to a difference in sensitivity to odors.

So why then did some dogs perform better than others on the scent test, and why did some individuals within a group not perform the same as the rest of the group? The wolves and scent-breed groups had the most similar results. If we were to look at their specific genotypes, we would expect that these animals would not only share the conserved 50 percent of the olfactory genes, but that they would share a large portion of the variable genes. Individuals that did not have the same test results would have some specific locations in these genes that would differ from their counterparts. The scent test gives us information on these groups of animals’ phenotypes, but it will take further research to confirm how closely the genotypes line up with the phenotypic results.

So why then did some dogs perform better than others on the scent test, and why did some individuals within a group not perform the same as the rest of the group?

The short-nosed group that had the poorest performance are animals that have been artificially selected for the trait of having a short nose. We humans like the cute, pushed-in faces; but in breeding for one trait, we have selected against other traits. These short-nosed pups are now unable to efficiently move air through their nasal passages, limiting the ability of odors to come in contact with receptors. It is not currently known if they have fewer receptors due to the decrease in size, but it is a reasonable hypothesis. Even if nothing differs in their nerves and the olfactory lobe of the brain, 50 percent of the components are altered enough to change their ability to work at full capacity.

One of the motivations for developing this scent test was to avoid the need to extensively train a dog prior to the dog being assessed for its scent skills. This is both an expensive and time-heavy endeavor, especially for dogs that do not make the grade. Cutting out the behavioral aspect of scent detection may make testing easier, but there is a reason that some of the best scent-detection dogs are not typically used in detection work. The bloodhound is a perfect example. These dogs can make wonderful scent-detection dogs, but they are harder to train to do a task than easy-going Labradors and do not have the same drive as German shepherds.

As a young-earth creationist, I love research like this because it shows us God’s consistency, diversity, and complexity all at the same time. Baraminology is the study of the created kinds, the way that God organized His creation according to the Bible. In the case of the wolves and dogs in this study, we see that they function in very similar ways, but not identically. The wolves and scent dogs were both able to locate food at the most difficult level of the test, but it’s significant that only the wolves greatly improved when later retested. The common ability to figure out scents as a single attribute does not automatically make them the same kind. When you take this information and combine it with other research such as records of interbreeding, comparative morphology (studying similar body structures), and comparative genetics, it gives us another piece of data to confirm that these animals are of the same created kind. This means that Noah would have only needed two canids on the Ark, not two wolves and two dogs.7 This is another confirmation that the created kinds of the Bible are at a similar level with today’s taxonomic level of the family.

With the complexity of this system of information and physical components, it is unfathomable to believe that it occurred by random chance. Once again we see the creation point to the Creator God and confirm His Word as recorded in the book of Genesis. The complexity of a dog’s sense of smell and how it is interwoven with its behavior, the very complexity of that relationship prompting this research, are two things that could not have evolved separately and still worked in concert as we see them today. Since both would need to have evolved at the same time, their design points to the need for a divine creator. He created a canid kind on Day Six of the Creation Week that would use its abilities to multiply and fill the earth. A representative pair of this single created kind would have also been on the Ark. After the waters receded, the genetic variety hidden within that single pair of canids would have multiplied and spread out all over the globe. Since groups of animals became geographically isolated from the main population, we have seen some of these hidden characteristics become visible. Indeed, we continue to see this in the ever-increasing number of dog breeds. According to the American Kennel Club’s website, 43 of the 189 dog breeds now recognized by the organization have become members since 2000. In pursuit of our own desires and in thinking we know what is best in a breed, we continue breeding by artificial selection, decreasing their overall vitality and ability (e.g., the short-nosed dogs that have a more limited ability to detect smells). Looking at the variety of these dogs’ physical characteristics gives us a hint at the variety of information God placed in the first two canids.

So what does a dog’s nose know? It knows that the Creator God has designed it and that dogs and the rest of creation groan from the sin and death brought to all of us from the Fall (Romans 8:22). It is only through the hope of Jesus Christ through His death, burial, and Resurrection that we can look forward to His return when all creation will be freed from the bondage of sin and death.