Christ, Christmas, and the US Constitution

The Bible is no longer widely accepted as the final authority in American culture. As a result, the Christmas season generates a multitude of questions from people who are confused and want to know whether they may wish someone “Merry Christmas,” or whether their town may include religious decorations to celebrate the season.

Why do many Christians, and their communities and schools, fear to openly proclaim the religious significance of Christmas? We believe the reason is the confusion generated by “separationists.”

Separationists are those who believe that openly celebrating the religious meaning of Christmas violates the U.S. Constitution by blurring the line between what they believe should be a separation of the roles of church and state. Their claims are generally based upon the mistaken belief that the doctrine of the separation of church and state is violated if the government acknowledges the birth of Jesus as the historical reason for celebrating December 25. 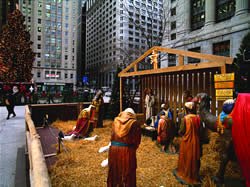 This decades-old photo depicts a scene no longer familiar in the big city. Decorations such as these are not outlawed, just highly controversial in today’s culture.

What Are the Legal Rules in Keeping Christ in Christmas?

In recent years, secular groups advocating the complete separation of church and state have been circulating misinformation about the legalities of public celebrations of Christmas, seeking to confine Christmas to the church or home. As a result, many public officials have been misled into believing that Christ must be removed from Christmas in public venues.

Despite these new assaults on Christmas, the Constitution does not require public officials to entirely obliterate religious themes or displays from public Christmas observances. In fact, no court has ever ruled that the Constitution prohibits Christmas carols, Christmas displays, or Christmas greetings in public streets, parks, schools, or commercial establishments, as long as the religious items are included along with secular symbols of the holiday season.

What Does the Constitution Say?

Public decorations often depict only nonreligious symbols of a winter holiday, such as snowmen and reindeer. Schools and public areas are eliminating any religious music, and many businesses have banned the greeting “Merry Christmas.” None of these measures are legally required by the Establishment Clause, despite what secular legal organizations hostile to the public recognition of Christianity would have us believe.

Now is not the time to lay down our spiritual arms and surrender to the very small percentage of Americans who are hostile toward Christianity and who want to eliminate all things religious, including Christmas, from our national life. Let us not only, with confidence, keep Christ in Christmas, but use this season as an opportunity to proclaim Him as the Creator and Savior.

You have more rights than you think

There are many opportunities to express the religious significance of Christmas.

Abridged from the article “Christ, Christmas, and the Constitution” by Dr. David C. Gibbs, Jr., and Dr. David C. Gibbs III. Used by permission from the Christian Law Association (CLA), a legal missionary ministry at www.christianlaw.org.

Previous Article The Star of Bethlehem Next Article Why Did Jesus Have to Die?