Many of America’s and England’s oldest universities were established as religious institutions, but now they advocate evolutionary thinking. What happened? 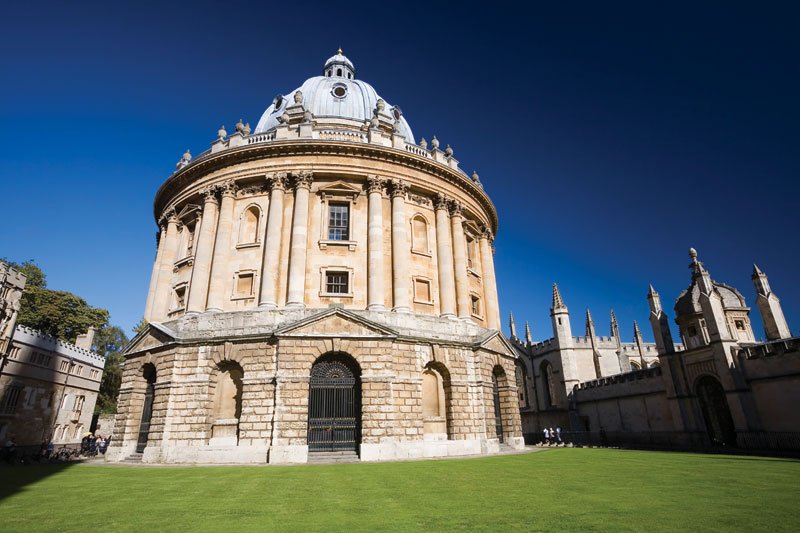 The Radcliffe Camera at Oxford University, built between 1737–1749, was originally used to house the Radcliffe Science Library.

Most of the colleges in the United States that started over 300 years ago were Bible-proclaiming schools originally. Harvard and Yale (originally Puritan) and Princeton (originally Presbyterian) once had rich Christian histories.

Harvard was named after a Christian minister. Yale was started by clergymen, and Princeton’s first year of class was taught by Reverend Jonathan Dickinson. Princeton’s crest still says “Dei sub numine viget,” which is Latin for “Under God she flourishes.”

In the United Kingdom, the earliest university-type establishment was probably the College, established by the Celtic preacher St. Illtyd in about AD 500. Oxford University was established by various religious orders. Likewise, Cambridge University was established in 1209 by Christian leaders. Saint Andrews, Scotland’s oldest university, was founded principally for the teaching and study of theology. The commitment of these religious founders might be suspect, but many of the later colleges were founded by Bible-believing Christians. The University of Edinburgh had a thoroughly evangelical beginning, being founded under Presbyterian auspices.

Even my alma mater, Southern Illinois University at Carbondale (SIUC), had Christian roots when it was founded in 1869. Our school motto was Deo Volente, which is Latin for “God willing.” By the time I attended SIUC in the 1990s, there was almost no vestige of that Christian heritage left. In fact, the university emphatically teaches evolution over millions of years and blatantly rejects the possibility of biblical authority (that the Bible is true—authoritative—and that we need to adjust our beliefs and actions to its teaching).

So what happened to cause so many schools to abandon their Christian roots?

Accepting a naturalistic worldview and compromising Scripture were the first cracks in these universities’ Christian foundations. These cracks led to the collapse of their Christian heritage.

The book The Sacred and the Secular University (2000) is an insightful study by Roberts and Turner, two secular historians who show no evidence of overt Christian bias. They discuss the change in American universities from the Christian worldview to naturalistic philosophy. They point out that universities across the board fell first in the area of science: “In the sciences, the critical departure from this hegemonic construct took place in the 1870s.” They add that “‘methodological naturalism’1 was the critical innovation” (p. 11).

Naturalism opposes God’s Word in Genesis, the foundational book of the Bible. As Psalm 11:3 states, “When the foundation is destroyed, what can the righteous do?” Cracks in the foundation led to a collapse of the Christian worldview at these schools.

The cracks first appeared in the late 1700s and early 1800s, culminating with the influence of Charles Lyell’s three volumes of Principles of Geology in the 1830s. Belief in an old-earth seriously wounded widespread acceptance of the Flood and the biblical chronology, and Lyell just “finished off the victim and nailed the coffin shut,” as AiG historian Dr. Terry Mortenson says.

This old-earth belief permeated universities by the mid 1800s, setting the stage for Darwin’s evolutionary model in 1859 (Origin of Species) and his later work on human evolution The Descent of Man (1871), both of which required long ages. After Christian universities adopted these compromises, the slide from biblical Christianity to naturalism soon followed.

Roberts and Turner explain why Christians compromised with naturalistic scientists:

The determination of scientists to bring phenomena within the purview of naturalistic description evoked a mixed response from Christians outside the scientific community. … Many clergymen and theologians—most commonly those who embrace a ‘liberal’ approach to Christian thought—sought to avoid that outcome by joining scientists in embracing an immanentist conception of God’s relationship to the world [emphasis added] (p. 31).

An immanent position holds that deity would be bound within the universe, which is what these naturalistic scientists were teaching.

Undoubtedly, compromise with belief in an ancient earth and evolution contributed greatly to the spiritual downfall of these institutions.

Leaving the Bible Behind

Once Christians began adopting a naturalistic view, including evolution or earth history over millions of years, it didn’t take long for the rest of their faith to come crumbling down. They had given up the Bible as their starting point and had accepted naturalistic science instead.

Genesis is written as literal history; so it should be taken as such. (See Steven W. Boyd, “The Biblical Hebrew Creation Account: New Numbers Tell the Story,” ICR Impact Article #377, Nov. 2004.) The demise of former Christian universities should be a lesson to individuals, churches, Christian colleges and universities, and seminaries to stand firm on the Bible’s clear teachings and beware of any doctrine that is not biblically sound.

For the time will come when they will not endure sound doctrine, but according to their own desires, because they have itching ears, they will heap up for themselves teachers; and they will turn their ears away from the truth, and be turned aside to fables. (2 Timothy 4:3–4, NKJV).

Looking for a college to attend? Visit www.answersmagazine.com/go/check-list for a list of questions to ask before you enroll.

Visit www.answersmagazine.com/go/university-roots for a short biographical sketch of Jonathan Edwards, a former president of Princeton University.

Previous Article A Tale of Two Journalists Next Article Do You Know What Your Children Are Being Taught in School?