How Will Americans Vote?

When Americans go to the polls today, many will think that the way they vote was determined by their reaction to the problems with the economy, Wall Street, the housing market, the war in Iraq, or numerous other issues. But regardless of who we are as Christians, we will ultimately be voting in accord with Proverbs 23:7: “as he thinks in his heart, so is he.”

The problem with America is not ultimately the economy, the morality, Wall Street, the war or the housing market—the problem with America is that hearts and minds have changed over the decades years. Generations have been brought up in basically a God-less education system. The church has, on the whole, compromised God’s Word, particularly in this era, beginning in Genesis—and such compromise then affects how people view the rest of the Bible.

When people vote today, how they view God’s Word is ultimately how they will vote. If our hearts and minds were as they should be, we would be voting in accord with the principles God has laid out clearly in His Word.

And ultimately, the only way to change America is for hearts and minds of people to change in regard to the Word of God. And that change needs to start in the church—a church that has by and large compromised God’s Word in the same way the Israelites did—by adopting the pagan ideas and religions of the world and compromising with the Word of God. So much of the church has adopted the pagan religion of this age (evolution/millions of years—a religion to explain life without God) and compromised the Word of God. And the way God judged the Israelites for this sin, He will also be (and is) judging America.

If my people, which are called by my name, shall humble themselves, and pray, and seek my face, and turn from their wicked ways; then will I hear from heaven, and will forgive their sin, and will heal their land.

Make sure you are thinking biblically when you vote today.

I encourage you to read the detailed article on AiG’s website today on the Walking With Dinosaurs stage production. I believe it will open your eyes in regard to the evolutionary secular humanist agenda to indoctrinate kids that this startling attraction has been set up to do. You can read the article at:

All the Way from New England

Yesterday a church group from Connecticut was here at the Creation Museum. In the photo, the third person from the left is Karsten B., who led the group from Landmark Baptist Church. As you probably know, this part of America is increasingly dark spiritually, and so, it’s encouraging to know that New Englanders are coming to the museum and are taking back biblical truths to their area. 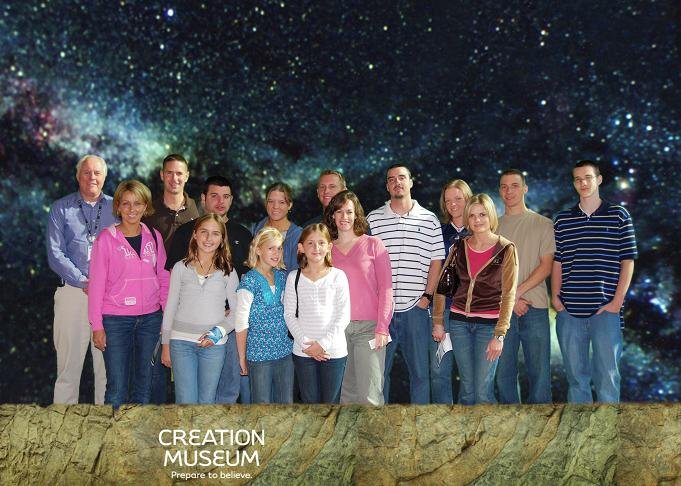 When he got back to Connecticut the following day, Karsten called us and said that the highlight of their entire trip through many states (including attending an exciting NFL football game in Indianapolis) was the museum. He complimented the museum in that it “did not water down the Bible” and that the content is true to Scripture. In particular, they enjoyed the The Last Adam film at the end of the museum tour and the museum’s grounds.

(Hosea 7:10, 13) And the pride of Israel testifieth to his face: and they do not return to the LORD their God, nor seek him for all this. . . . Woe unto them! for they have fled from me

Trouble brings a cross roads–one way is to increase pride & refuse to repent & call out to the Lord Jesus Christ and the other way is to become humble & call. Thanks for stopping by and thanks for praying,