Before you read the fascinating testimonies below, I wanted to include two photographs taken yesterday at the Creation Museum of the middle school students from Bellevue Baptist Church in Memphis, Tennessee. They are on a road trip and stopped in for a day at the Creation Museum. The middle school choir sang at AiG’s staff meeting—and later in the day they all lined up on the Arch Bridge to have their photographs taken. 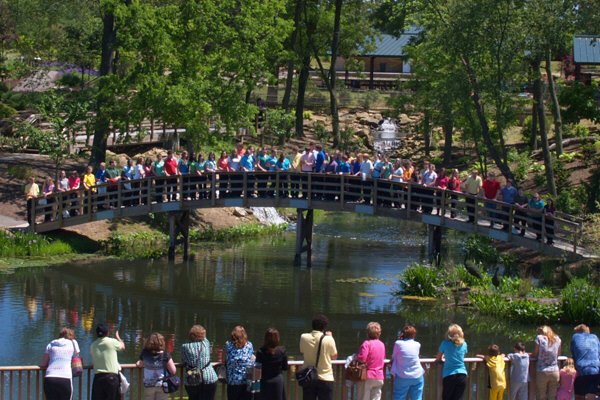 As a ministry, AiG does not get involved in political activism, such as trying to get creation, ID, etc taught in public schools. We have always maintained that the more we get information to the people, that will influence the culture. The more Christians are set on fire for the Lord and people converted to Christ—people who consistently build a Christian worldview and become light and salt as the Bible describes—that will greatly influence/change the culture. As such people get on school boards or obtain places in politics, or teach in public schools—their worldview will influence the decisions they make, how they teach (just as is true of an atheist). Here is one example as a result of a conference where Dr. Terry Mortenson and I spoke recently. After speaking at the conference, a CD of our PowerPoint talks was sent to a lady at the seminar who teaches science in a public school. She sent this response to Dr. Mortenson:

I received the CD today from the presentations . . . . I want to thank you so much. With all that you have to do I am humbled that you were able to take the time to get this information to me. I want to thank you and Ken also for the great encouragement you were to me as a teacher. I have already been able to share some of the information with my friend, the department chair at our school.

The students are starting a Bible club, and they want to be able to come to my colleague and me to get information. As a matter of fact, my fellow chemistry teacher who is also a Christian had two boys in after school asking questions, and he was able to share so much about the young-earth belief, as well as the science that is consistent with the Bible. I was able to share too—so, God is working in the public school kids—and I think they really want answers. Again, it was great being there, and I am looking forward to learning so much more. I feel like I am at a point in my teaching career and as a Christian that I need to really know the truth so that I can defend my faith and so that I can train my own children in the truth. I think the weekend . . . was just what I needed to jump start my studies. We will be praying for your ministry—that God will bless it abundantly. Hopefully we will be at the museum some time this summer. CELEBRATIONS IN THE REPUBLIC OF SOUTH KOREA

From the Country of South Korea

While the AiG Museum and the AiG Ministry has enjoyed the one year anniversary, I have been ministering in South Korea. I have followed the daily celebrations and my wife, Diana, and I would have enjoyed being part of the special celebration.

However, the AiG Missionary arm was enjoying a Korean-Style celebration of our own. I joined the Korean Association of Creation Research for their annual meeting in Daegu, South Korea. This sister organization, with a membership of over 1,000, was celebrating another successful year of ministry which included nearly 1,000 Creation events. I was the guest lecturer for the conference and praised the Lord for the American Creation Museum. The Conference will be sending greetings and congratulations to AiG. These meetings were held on the campus of Keimyung University, which was founded 50 years ago by a Christian missionary from the USA. The campus now hosts over 25,000 students.

I showed a PowerPoint picture presentation of our museum, and after it was received with much discussion and excitement. The reason for all the intense interest is the already underway plans to build a Creation Museum in Korea.

I then had the unique privilege of preaching at the large Adam Cathedral on the campus. The Cathedral enjoys the great music from its 3,200 pipe-giant pipe organ. In fact, on Saturday the organist presented a private recital for me and some of the conference delegates. Hundreds of university professors, their families, and students gathered to hear me preach. The pastor translated as he spoke and the congregation gave a warming ovation at the end.

After a trip to Seoul, South Korea, on the speed train that travels at 230 MPH, the meetings with the KACR began at their headquarters and mini-museum. In these meeting we agreed to translate most of our AiG books and DVDs into Korean. The books will be printed in Korea and distributed through nation wide book stores and the KACR meetings. With a 30% Christian population in South Korea, the possibilities for maximum impact and exposure will be phenomenal. This agreement places AiG right in the middle of the largest growing Christian community in the world per capita.

Together the two organizations will be able to reach not only Korea but also all of Asia as KACR has a real missionary heart as well.

I was invited to a very special dinner-meeting with Pastor Kim Jong Joon, the pastor of a dynamic Church of over 20,000 members. We talked about biblical authority, creation evangelism, the Creation Museum ,and the Koreans’ planned museum. I was then invited by Rev. Joon to return to Korea as soon as possible and preach at his church. This would involve preaching at five morning worship services. I quickly accepted the invite because it will be a blessing to preach to that many people and formally introduce AiG to a very large group of people.

Further, the pastor has accepted my invitation and will travel to the USA in July to meet with Ken Ham and me and to see the museum. They are anxious to learn from AiG so that their museum can a great testimony in Korea as ours is in the USA.

Yes, I was sad that I missed the Kentucky celebration, but I am celebrating in Korea over all of our new friends who are as passionate about creation and biblical authority as we are.

Please pray for this exiting new development in AiG WorldWide and please consider giving to enable this global work to continue. AiG is proud to partner with the ministries in the Republic of South Korea.

(Isa 10:24) Therefore thus saith the Lord GOD of hosts, O my people that dwellest in Zion

For their unbelief if we were the Lord Jesus Christ we would be done with the Jews, but we learn about God’s love as we see Him cry to them, “O my people.” Thanks for stopping by and thanks for praying.