Why Did God Make Weeds?

Weeds like dandelion are infamous for ravaging lawns, gardens, and driveways everywhere. But could this lowly weed be a blessing in disguise? A closer look reveals God’s very good design even for these ambitious and surprising plants.

What is a weed? According to Merriam-Webster, a weed is “a plant that is not valued where it is growing and is usually of vigorous growth.”1 Put simply, weeds are unwanted plants with too much personality.

I have a love-hate relationship with weeds, especially crabgrass. As an avid gardener, this fearless plant was once my sworn enemy. I’m sure it has singlehandedly sabotaged the careers of more than a few horticulturalists. Not many plants can lay siege to a flowerbed or a row of lettuce with such unrelenting tenacity! But careful observation of God’s world reveals that even crabgrass is designed for a purpose.

It’s no accident that weeds have followed people around the world. Of all God’s creatures, human beings cause the most disturbance to the face of the earth. From backyard gardening to shopping mall construction, we do an awful lot of digging, plowing, and bulldozing. 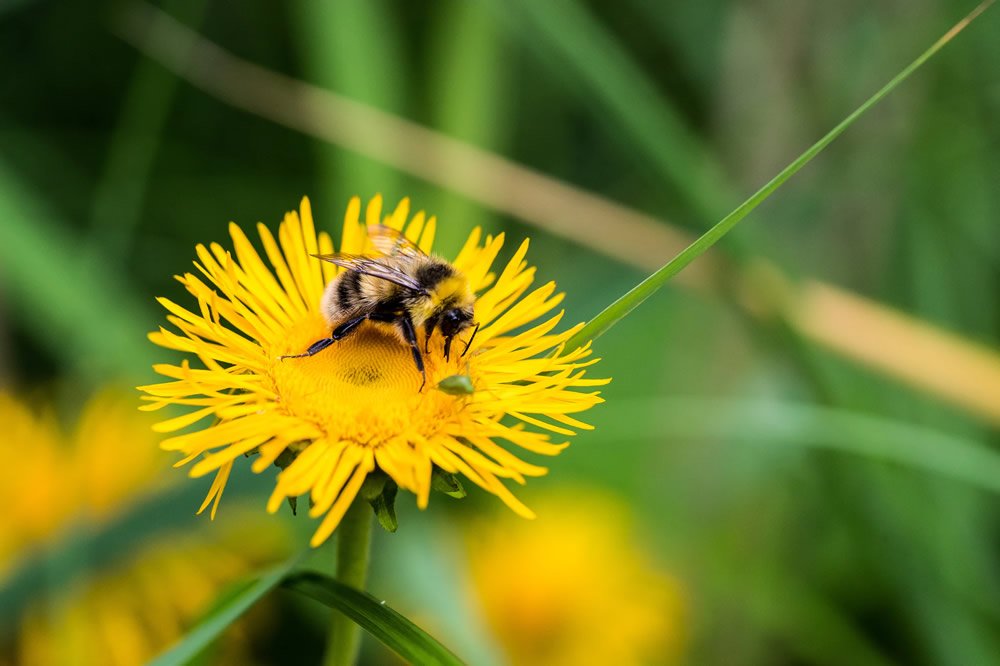 Many weeds attract helpful pollinators and provide food and habitat for wildlife. Image by Stefan Steinbauer, via Unsplash.

But nature doesn’t tolerate all that bare soil for long—it needs to be covered as quickly as possible. Exposed soil erodes with the slightest rain, washing away precious nutrients and minerals. Sunlight beats on unprotected ground, baking the unseen community of microorganisms that live below the surface.

Enter the ecosystem repair squad! Weeds like crabgrass are God’s pioneer plants, colonizing ground that would be uninhabitable to less hardy species. Their roots stabilize the soil and help prevent erosion. Their plant bodies shield the ground from the sun’s heat, converting sunlight into organic matter that later gets recycled into the soil when they die.

The Front Line in Ecological Succession

As weeds take over a piece of bare earth, a process called ecological succession begins. Succession is the movement of a living community in nature toward a mature or “climax” ecosystem, like a forest. This important natural process is how plants and animals repopulated the earth after it was destroyed by the global Flood of Noah’s day, and succession still continues all around us.

Weeds are on the front line of the biological army when it comes to healing a barren landscape.

For example, what would happen to your yard if you stopped mowing and left it alone? As long as you live in an area with enough rainfall, in 30 years your yard would be well on its way to becoming a forest. Every time you mow the lawn, you’re turning back the clock on ecological succession.

Weeds are on the front line of the biological army when it comes to healing a barren landscape. So next time those weeds come popping up in your newly tilled flowerbed, you can thank the Creator for his wisdom and care—and consider adding more groundcover perennials!

Besides quietly repairing the earth, weeds have also served humanity for thousands of years as both food and medicine. Many noxious weeds on the garden club’s most-wanted list have a rich history of use in herbal medicine. Some were even imported originally as vegetables, like my all-time favorite weed: dandelion. 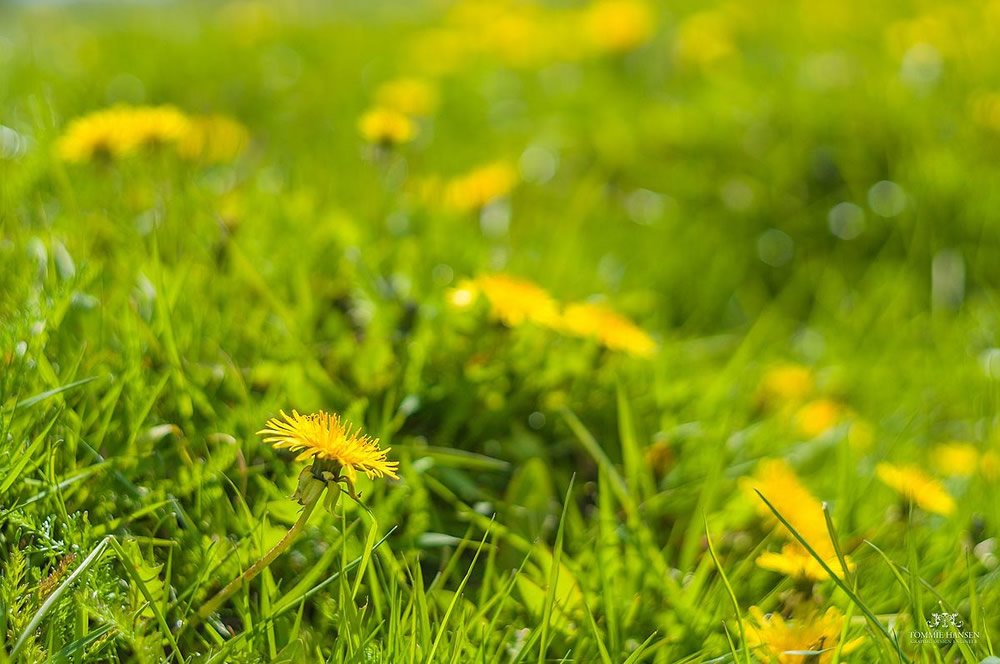 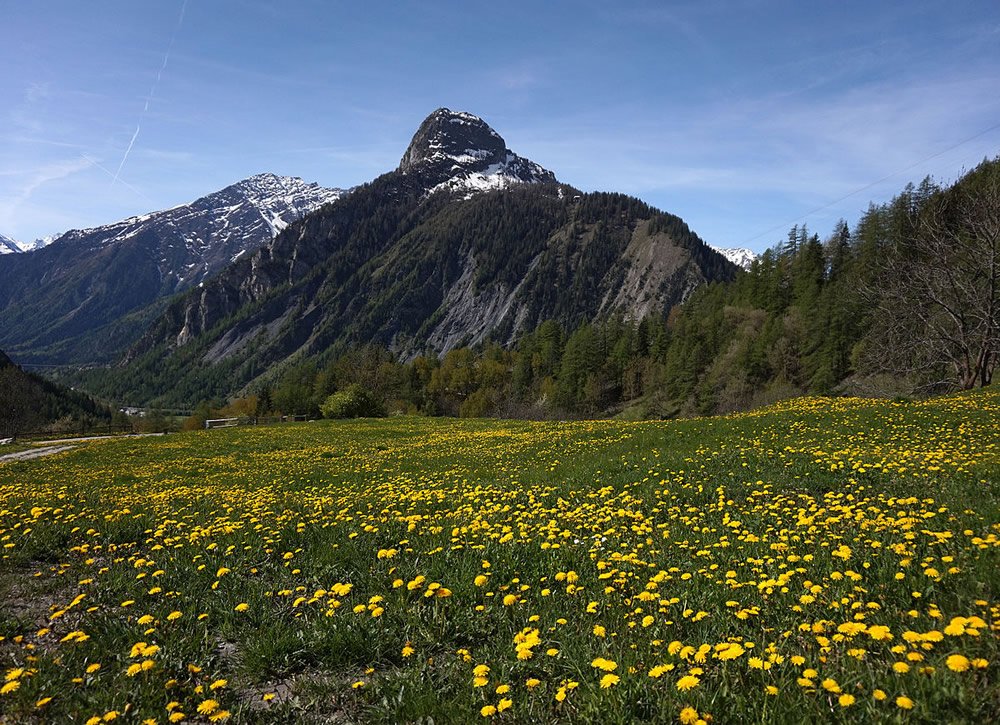 The humble dandelion may be America’s most notorious weed. It shows up across the country as an eye-popping yellow flower stippled over green lawns—a sight that brings muttered curses to the lips of many homeowners. Personally, I enjoy the splash of color it brings.

Although banished from most gardens, dandelion is better for you than spinach! The greens have high levels of vitamin A and vitamin C, loads of vitamin K, and a host of other important nutrients. Dandelion roots and leaves have a long history of medicinal use for treating digestive issues, reviving the liver and gallbladder, and more.

The dandelion first came to North America as an herb and vegetable, likely on the Mayflower.

Many historians believe the dandelion first came to North America as an herb and vegetable, likely on the Mayflower. Even today, dandelion is cultivated in countries throughout the world. The whole plant is edible from the root to leaves, stem, and flower. Of course, always exercise caution when identifying wild plants, and consult a professional before using any herb medicinally.

But Aren’t Weeds a Result of Sin?

Before sin entered the world, God put Adam and Eve in the Garden of Eden to work it and keep it (Genesis 2:15). Did their work include pulling weeds? Well, yes and no. Adam didn’t have to worry about noxious weeds taking over. However, he probably needed to move and trim plants as part of caring for the garden. So weeding—removing unwanted plants—was likely on the to-do list.

In my experience, pulling weeds can be sweaty, tedious work. But in God’s original creation, all work was enjoyable and not difficult. Even now we get glimpses of this kind of happy work. Quietly picking weeds out of my raised-bed garden can be quite a relaxing way to spend a mild summer morning.

Sadly, work became arduous when God cursed the ground because of Adam and Eve’s disobedience. As a result, some weedy plants like thistles and nettles developed painful or irritating defense structures that were unnecessary before sin.

And to Adam he said, “Because you have listened to the voice of your wife and have eaten of the tree of which I commanded you, ‘You shall not eat of it,’ cursed is the ground because of you; in pain you shall eat of it all the days of your life; thorns and thistles it shall bring forth for you; and you shall eat the plants of the field. (Genesis 3:17–18)

Many of the same kinds of plants that are now considered invasive weeds (or their predecessors) were growing in God’s original creation, each masterfully designed for its ecological niche. Dandelions, spineless thistles, and even crabgrass—all were in perfect balance with the rest of God’s creation. Since God cursed the ground, that harmonious balance has been disrupted, and weeds often take over other less-assertive plants.

Dandelions, spineless thistles, and even crabgrass—all were in perfect balance with the rest of God’s creation.

The Flood of Noah’s day also drastically changed the balance of plant and animal life on the earth. Many species that were populous before the Flood became extinct afterward, and brand new ecosystems formed. Opportunistic plants replaced the niche of those tender species that did not survive the Flood and its aftermath. Plants have specialized for their particular niches and locations. This means invasive species, whether introduced purposefully or accidentally by man, can monopolize whole ecosystems and drive those native species to extinction.

The Restoration of Weeds—and Everything Else

Did you know that even weeds have a glorious future of redemption? Yes, someday thorns and every other effect of the Curse will vanish forever (Revelation 22:3)!

Because of the gospel, we can eagerly look forward to the time when our Lord Jesus will rule over the new heavens and new earth (2 Peter 3:13; Revelation 21:1–5). Creation will be restored to perfect harmony, and we will enjoy the presence of God for eternity.

For the creation waits with eager longing for the revealing of the sons of God. For the creation was subjected to futility, not willingly, but because of him who subjected it, in hope that the creation itself will be set free from its bondage to corruption and obtain the freedom of the glory of the children of God. (Romans 8:19–21)